The trend is becoming clear.

Blame surging home prices that have outrun wage increases for years, mortgage rates that have risen to the highest level since 2011, the massive affordability issues that come with those factors, and now Wall Street’s resurging appetite for single-family homes that then appear on the rental market:

In April, pending home sales fell 2.1% from a year ago, according to the National Association of Realtors this morning. It was the fourth month in a row of year-over-year declines. The data is volatile, but the trend is starting to become clear: 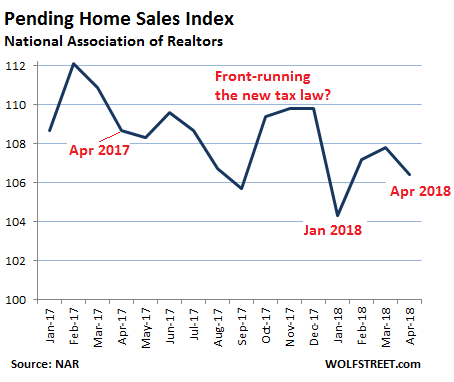 The index, based on a national sample of the transactions handled by the NAR’s members, is a leading indicator for actual sales. It takes into account sales of existing homes, and not of new homes. A sale is listed as pending when the contract is signed but before the transaction closes, which usually happens within a month or two.

The Pending Home Sales Index fell in three regions and rose in one, compared to a year ago:

The report blames inventory of existing homes listed for sale. “Feedback” from the NAR’s members indicated that “demand for buying a home is very robust,” the report said. But…

The unfortunate reality for many home shoppers is that reaching the market will remain challenging if supply stays at these dire levels.

However, it all comes down to overall supply. If more new and existing homes are listed for sale, it would allow home prices to moderate enough to stave off inflationary pressures and higher rates.”

The plunge in January pending homes sales (chart above) was also blamed not only on supply but also for the first time on “the sudden increase in mortgage rates.” And mortgage rates have increased sharply since then. So this situation hasn’t gotten any better. But mortgage rates aren’t high enough yet to sink the market, they’re only high enough to keep some people out of the market.

So why are there seemingly so few homes for sale?

Even in the hottest markets, such as San Francisco, there is plenty of inventory for sale, but much of it is high-priced and difficult to reach for average buyers. But that doesn’t mean they aren’t trying.

Then there’s new construction, particularly of condos: New-construction inventory doesn’t show up in the inventory-for-sale data, which is based on MLS data, because condo developers have their own sales offices and normally don’t use MLS.

And Wall Street is once again scooping up single-family homes to put the on the rental market. Single-family home rentals are booming, and rents are rising, even as apartment rents have come under pressure in may major markets from an onslaught of multi-family supply.

Last year, Wall Street firms bought over 29,000 single-family homes, concentrated on a handful of markets, the most since 2014, Bloomberg reported earlier this month. This is a scheme that was launched in late 2011, with PE firms such as Blackstone Group using cheap funding and buying up homes out of foreclosure. These entities became the nation’s largest landlords that have by now mostly been spun off into publicly traded REITs. They developed a new structured security with which to fund their purchases: rent-backed securities. The peak year of purchases was 2013. Then purchases fell.

But now they’re rising again – in 2017 to the highest level since 2014. Among the largest buyers last year:

And this trend is continuing, fired up by strong rental demand for single-family homes and by cheap funding methods available only to large firms, including rent-backed securities and a still easy bond market. In investors’ minds – both, those that purchase the debt and those that purchase the shares of the REITs – the buy-to-rent scheme has turned into a proven global asset class, and this creates more demand for those investments. And the homes are pulled off the for-sale listings are appear on the for-rent listings.

Here’s the impact of rising mortgage rates on home buyers, and on the market, in dollars and cents. Read…  What Will Surging Mortgage Rates Do to Housing Bubble 2?