But it just started. Could it be the new tax law and sky-high home prices?

The National Association of Realtors is already blaming rising mortgage rates. Pending home sales – an indicator of future home sales, based on contract signings – in January fell 3.8% from a year ago, to their lowest level since December 2015, NAR reported.

All major regions got hit with year-over-year declines:

I can see that a harsh-winter scenario in January was in part responsible for the 12% plunge in pending home sales in the Northeast. But year-over-year declines were spread across the nation.

And the trend doesn’t look very hot, outside of the spurt late last year, just before the new tax law took effect, as this 13-month chart of the seasonally adjusted index shows: 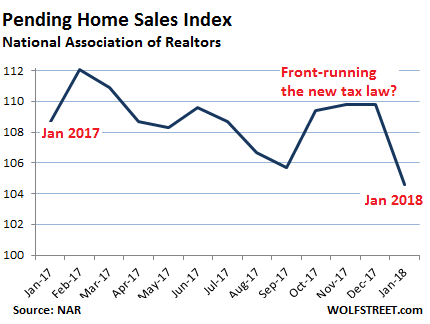 On the long-term chart (via Advisor Perspectives), the magnitude of the decline, while significant, pales compared to the plunges during the housing bust: 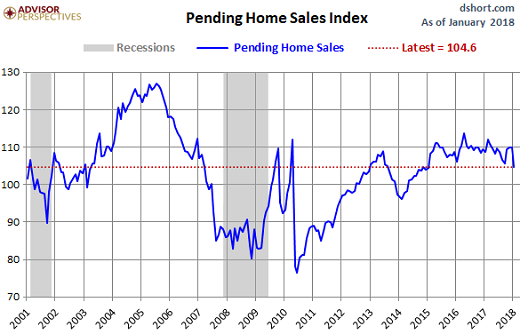 The economy is in great shape, most local job markets are very strong and incomes are slowly rising, but there’s little doubt last month’s retreat in contract signings occurred because of woefully low supply levels and the sudden increase in mortgage rates.

Mortgage rates have been rising sharply since December. According to the Mortgage Bankers Association, the average interest rate of a conforming 30-year fixed-rate mortgage jumped from around 4.0% in November and December to 4.4% by the end of January, and has continued on this trajectory. The MBA reported today that for the week ended February 23, it was 4.64% (via Trading Economics). So the January move in mortgage rates was just the first baby step, there being a good chance mortgage rates will be above 5% and perhaps close to 6% by year-end: 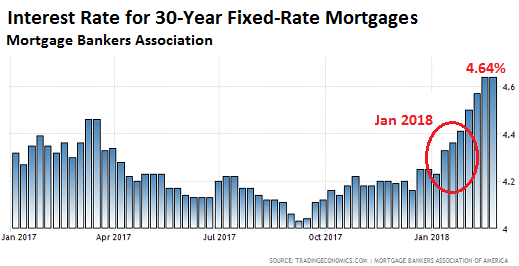 Despite being very low still, the average mortgage rate is now at the highest since the brief peak in 2013, and before then since April 2011: 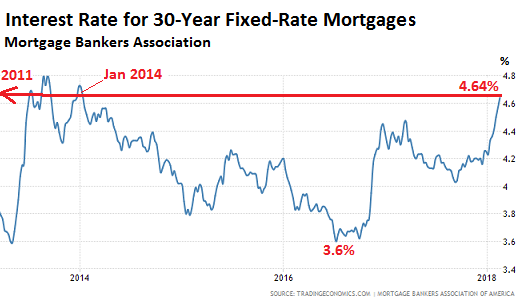 But home prices have soared 46% since the beginning of 2012, according to the S&P CoreLogic Case-Shiller National Home Price Index: 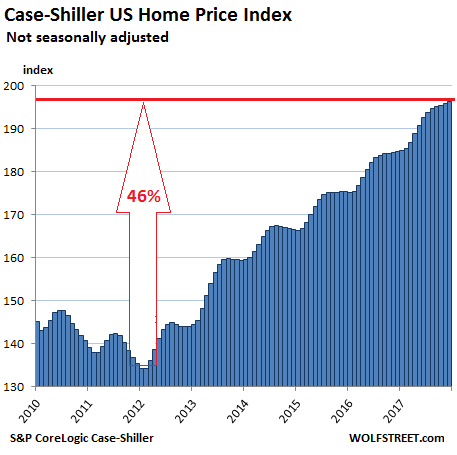 These far higher home prices with the same mortgage rates as in 2011 produce much higher monthly mortgage payments – hence the affordability crisis for many households. Which the NAR also points out: “The lower end of the market continues to feel the brunt of these supply and affordability impediments.”

Inventory of homes listed for sale has been low and trending lower. According to the NAR report: “The number of available listings at the end of January was at an all-time low for the month and a startling 9.5% below a year ago.”

Why are homeowners not putting their homes on the market? Here are some reasons:

January was the first month when higher mortgage rates, the elimination of many of the tax benefits of homeownership, and soaring home prices came together in one package. If pending home sales are any indication, the confluence of these three factors might turn out to be more quickly disruptive than I’d figured just a few weeks ago.

But the proof is not in declining volume but in declining prices – and this is not happening yet. Instead we get a story of price spikes and some new flat spots. Read…  Update on the Splendid Housing Bubbles in US Cities

68 comments for “I Didn’t Think it Would Go This Fast: Mortgage Rates Blamed for 3-Year Low in Pending Home Sales”