The US is a net exporter of gasoline, regardless of how much you pay at the pump.

The average price of gasoline in the US, across all grades and all formulations, rose to $3.00 a gallon, the EIA reported today just for Memorial Day weekend, when people are planning to burn up a lot of it. This is the highest weekly price the EIA has reported since November 2014. But it’s still a lot lower than just before Memorial Day 2014, when gas cost on average $3.74 a gallon. 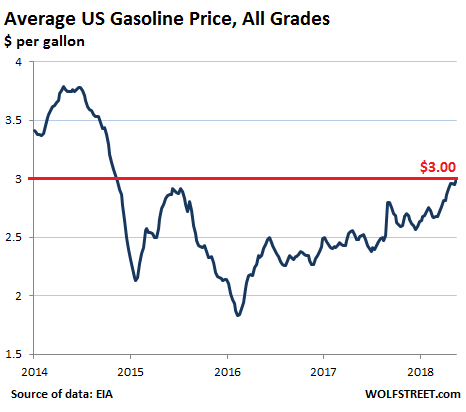 In California, the average price of gasoline is now at $3.62, EIA data shows. Where we got gas in San Francisco, a gallon of regular already cost $3.75.

This is curious because I can watch fully loaded tankers sail through the Golden Gate into the Pacific. They’re loading gasoline at the refineries in the Bay-Area city of Richmond, and they’re heading mostly to Mexico and other Latin American destinations.

And gasoline exports from the US Gulf Coast have been surging for years. In 2017, gasoline exports rose to 821,000 barrels per day (b/d), equal to about 9% of US gasoline consumption, the EIA reported yesterday. And nearly half of these exports went to Mexico: 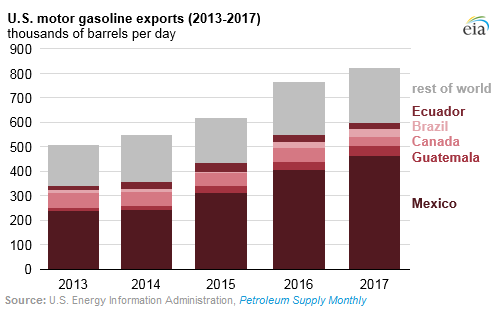 This surge in gasoline exports came despite record gasoline consumption in the US in 2017, which matched the record high set in 2016 of 9.3 million b/d.

How is that possible? The EIA: “Record-high refinery runs and historically high gasoline production supplied both record-high domestic consumption and increasing gasoline exports.”

In the past, gasoline imports by far exceeded tiny amounts of exports. But already in 2012, there were several months when exports exceeded imports for the first time. As exports continued to rise and imports continued to fall, the amount of net imports (imports minus exports) shrank further. In 2016, the US became a net exporter of gasoline for the first time, exporting more gasoline than it imported. This trend accelerated in 2017. The black line represents net imports: 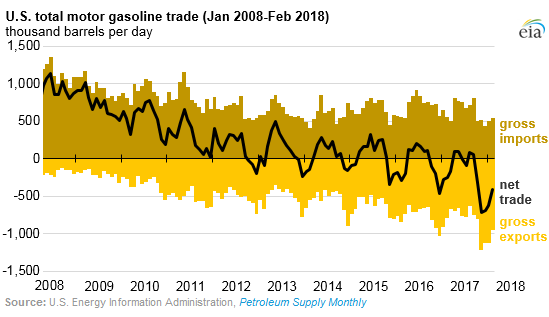 Due to seasonality of demand for gasoline, the US had been a net importer of gasoline in the spring and summer months when domestic consumption peaks, and a net exporter in winter months when demand is lower. By 2017, as the above chart shows, net imports (black line) during those peak months were reduced to two little bumps above the zero line.

In terms of regions, there have been some big changes. The EIA:

Historically, the Gulf Coast (Petroleum Administration for Defense District, or PADD, 3) supplied refined products to other regions of the United States where demand exceeded supply, such as the Midwest (PADD 2) and the East Coast (PADD 1). The Midwest has reduced its need to draw supplies from the Gulf Coast in recent years because refineries are now running at higher rates and increased capacity, allowing them to meet in-region demand. The East Coast still relies on supplies from the Gulf Coast and remains a large net importer of gasoline.

Because of logistical and economic constraints on sending gasoline supplies from the Gulf Coast to other regions in the United States, the volumes of gasoline no longer demanded by the Midwest have become available for export. 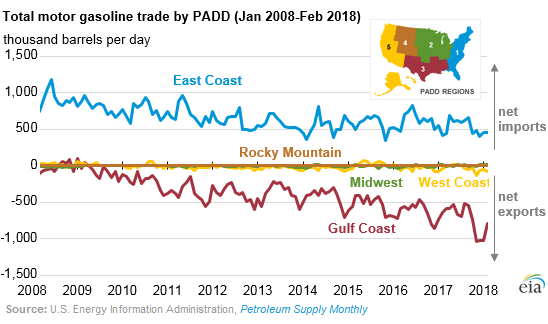 The West Coast is an example of how globalized refining has become. There are no crude oil pipelines across the Rocky Mountains, and oil cannot be pumped from the oil producing regions east of the Rockies to the West Coast.

While California is a large oil producer, it produces substantially less than its demand from refiners. In the 1990s still, most of the oil shipped to California came from Alaska. But since then, the supply from Alaska has been shriveling, and California’s own production has been declining too. But foreign supply has surged.

This shift is particularly interesting because total demand for crude oil in California has dropped 3% over those 20 years, even as the population has surged by 23% to nearly 40 million in 2017. This shows the impact of large-scale efforts at energy conservation in the state.

And so, when I see the tankers loaded up with gasoline sailing from the Bay toward other countries, even as our gas stations are cleaning out our wallets at the pump, I’m reminded that business is business, that these products are global commodities, and that supply follows the money.

81 comments for “US Gasoline Exports Surge, as Price Hits $3 for Memorial Day, $3.69 in California”