The dollar inched up again today, one more step in a series of increases that started on April 17. It has risen 2.3% in those seven trading days, based on the WSJ Dollar Index (BUXX), which tracks the dollar against 16 other currencies including the Mexican peso and the Chinese renminbi, and it has risen 2.4% based on the Dollar Index (DXY), which tracks the dollar against six other currencies,. 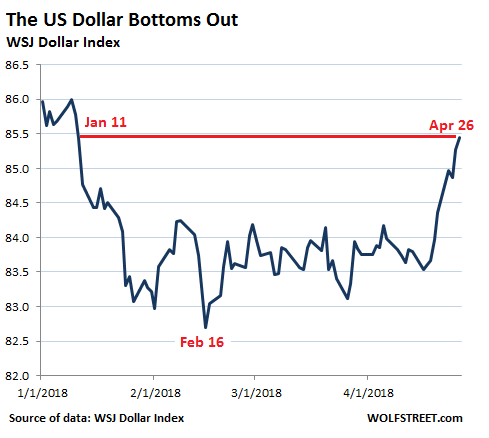 After its peak on January 3, 2017, the dollar dropped nearly 12% in 14 months, dissed and kicked around by various voices in the White House as soon as they’d moved in, including Treasury Secretary Steve Mnuchin at every opportunity he gets.

This chart shows the dollar since the November 2016 election, via its recent peak in January 2017, the low in February 2018, and the uptick since: 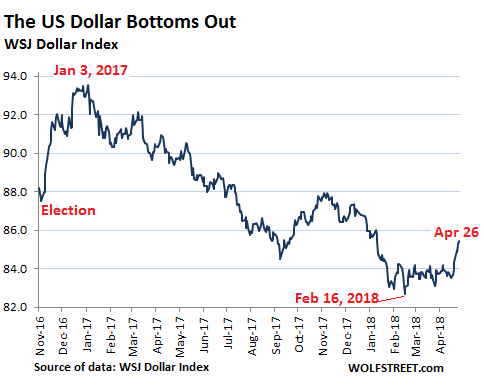 Over the longer term, it becomes clear how the Fed’s tapering and then the end of QE in late 2014 had lit a fire under the dollar, and it began to surge, from July 2014 into January 2016. This was followed by a sell-off – enough is enough, the market said – that lasted through the summer of 2016. And after the election, the dollar surged again for two months, as part of the initial Trump bump, till January 3, 2017, before cratering for 14 months until February 16, 2018: 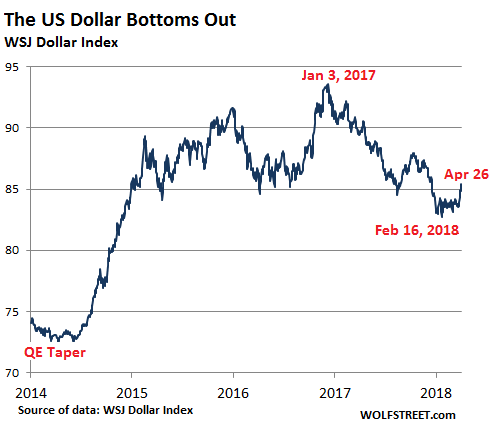 The Fed’s unperturbed and increasingly well-pronounced rate-hike path and the now accelerating QE unwind have pushed the US Treasury six-month yield above 2%, in an environment where the six-month German and Japanese government yields are still negative (-0.62% and -0.15% respectively). This disconnect has finally started to sink in. And it has become clear to the markets that the Fed is actually doing what many market players had said the Fed could never do: raise rates substantially and begin shedding the securities it had acquired during QE, while other central banks were still trying to water down their currencies.

This has now put a floor under the dollar.

Doubtlessly, Mnuchin and others in the White House, and perhaps even President Trump himself, will step forward and diss the dollar at regular intervals. And there are a lot of macro and fiscal concerns that could weigh on the dollar. So I doubt that it will just skyrocket from here. But I do think that the dollar has found a near-term bottom in February and will gain strength going forward, and will end the year higher than where it is today.

And so everything spikes. Read…  Update on the Most Splendid Housing Bubbles in the US