The sixth month of the QE-Unwind ended on March 31, which is reflected in the Fed’s balance sheet, released this afternoon, for the week ending April 4. The QE-Unwind appears to be on automatic pilot, clicking along at the pace that accelerated in January, despite the sporadic stock market sell-offs since early February.

During the years of QE, the Fed acquired a total of $3.4 trillion in Treasury securities and mortgage-backed securities. The MBS are backed by mortgages that are guaranteed by Fannie Mae, Freddie Mac, and Ginnie Mae. Now the Fed is shedding those securities at a rate that accelerates every quarter until it reaches its maximum pace of up to $50 billion a month in Q4 2018.

By the end of the year, this plan would shrink the balances of Treasuries and MBS by up to $420 billion. In 2019, and going forward, up to $600 billion would come off the balance sheet per year, until the Fed deems the balance sheet to be sufficiently “normalized” — or until something big falls apart, whichever comes first.

For Q1, the scheduled pace was up to $20 billion a month. So for March, we’re looking for a reduction of $12 billion in Treasuries and $8 billion in MBS. 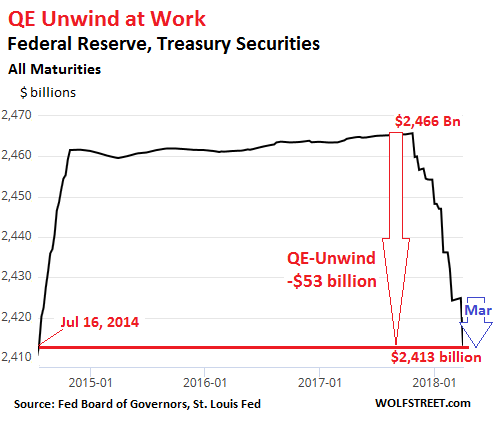 The stair-step movement in the chart above is a result of how the Fed sheds securities. It does not sell them but allows them to “roll off” when they mature, which is mid-month and at the end of the month. In March, no Treasuries on the Fed’s balance sheet matured mid-month. But at the end of March, $31 billion matured.

So the Fed replaced $19 billion of the maturing Treasuries with new ones directly via its special arrangement with the Treasury Department that cuts out Wall Street. Those $19 billion were “rolled over.” But it did not replace $11 billion of maturing Treasuries. Hence, they “rolled off.” The blue arrow in the chart above shows the March 31 roll-off.

Allowing MBS to “roll off”

For March, the plan calls for $8 billion in MBS to roll off.

But residential MBS are different. Holders receive principal payments continuously as the underlying mortgages are paid down or are paid off. Thus, the principal shrinks. At maturity, what’s left over is paid off. To keep the MBS balance steady, the New York Fed’s Open Market Operations (OMO) continually buys MBS.

Settlement of those trades occurs two to three months later, which is when the Fed books the trades. This time lag causes weekly fluctuations on the Fed’s balance sheet in the range of $10 billion to $20 billion. It also delays when MBS that have been allowed to “roll off” disappear from the balance sheet [my detailed explanation is here].

Given the jagged line on the chart, we’re looking for lower highs and lower lows. Today’s balance sheet reflects MBS that matured somewhere around December and January. In December, $4 billion in MBS were supposed to roll off per month; in January, the rate was scheduled to accelerate to $8 billion.

The chart below shows the lower highs and lower lows over the past few months. At the low in late October and early November, the Fed held $1,770.5 billion in MBS. This marked the starting point. The low in early March was $1,760. Today’s balance sheet shows $1,754.4 billion. From low to low over the past month, the balance dropped by $5.6 billion, reflecting trades somewhere around December and January. In total, the balance of MBS shrank by about $16 billion: 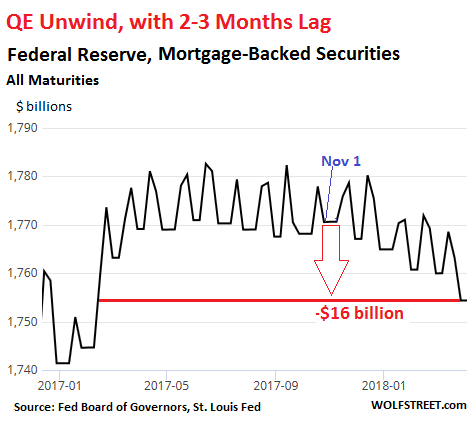 The overall balance sheet too

The QE-Unwind only relates to Treasuries and MBS, which dropped $53 billion and $16 billion respectively since the beginning of the QE-Unwind, for a combined decline of $69 billion. 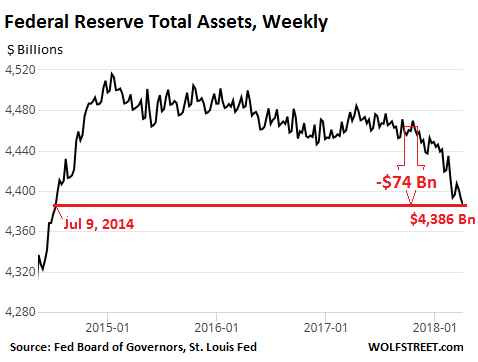 The balance sheet also reflects the Fed’s other roles that may impact its assets and liabilities. It acts as the bank of the US government, and the Treasury Department keeps its cash balances on deposit at the Fed. It also holds “Foreign Official Deposits” by other central banks and government entities. But these and other activities have nothing to do with QE or the QE-Unwind.

It will let them rip.

Despite the sporadic sell-offs in the stock market, the QE-Unwind proceeded on plan, and I expect this to continue. It looks very unlikely that the Fed will try to stop a sell-off by altering its QE-Unwind routine. The Fed is targeting “elevated” asset prices. Sell-offs are part of the process, and the Fed will let them rip.

However, if credit freezes up as it did during the Financial Crisis – when fears arose that even big companies might have a hard time making payroll – all bets will be off, and the Fed will step in as lender of last resort. But that scenario is not yet on the horizon. So the QE-Unwind will be allowed to do its magic, which is to undo part of what years of QE have wrought.

Interest rates “may go higher and faster than people expect,” explained Jamie Dimon. The Fed may have to “sell more securities,” and “as all asset prices adjust to a new and maybe not-so-positive environment,” there’s “a risk that volatile and declining markets can lead to market panic.” Read…  “When the Next Crisis Begins…” JPMorgan CEO Jamie Dimon