I’m looking at what’s behind the numbers.

The monthly jobs report data is based on surveys of employers and households – looking at the labor market from two different perspectives. And everything depends on how it is defined. For example, “unemployed” doesn’t mean “not working.” There are a lot of people who are not working for a reason, such as infants, full-time students, retirees, and many others – and the reasons matter.  So here we go.

Nonfarm payrolls rose by 103,000 jobs in March, seasonally adjusted, according to the Bureau of Labor Statistics, based on its survey of about 149,000 businesses and government agencies totaling about 651,000 work sites. As measly as the increase in payrolls was, March was the 90th month in a row of gains, the longest such period in the history of the data.

The job gains in January and February combined were revised down by 50,000 as more survey data became available. Even after those revisions, the gain in both months combined was 502,000. And for Q1, the payroll gains amounted to 605,000.

The monthly data is volatile, jumping up and down and getting revised after the fact. It’s the trends that matter. These trends become more apparent in the 12-month total.

For the 12-month period ended in March, employers added 2.24 million jobs (not seasonally adjusted). This is in the lower-middle of the range since 2012. The chart below shows the 12-month change in payrolls going back to 2000: 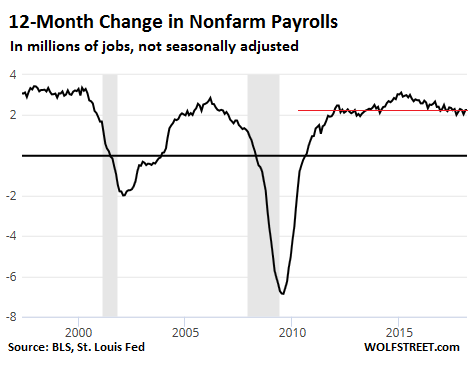 The civilian labor force, at 161.76 million people, was up by 1.64 million from March last year (not seasonally adjusted), according to the BLS survey of households. 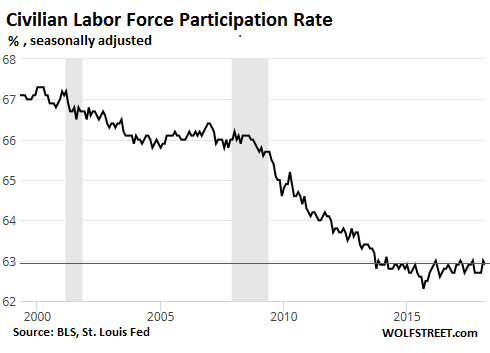 The broadest measure of the health of the labor market – but also impacted by demographic trends – is the Employment-Population Ratio (the employed as a percent of the “civilian noninstitutional population” 16 years or older. In March, at 60.4%, the rate was up a tad from March a year ago (60.2%), and up sharply from the 58%-range during the employment crisis after the Great Recession. While it has been recovering since 2013, it remains in troublesome territory. At the peak in 2000, it was at 64.7%. The chart shows the devastating impact the last two recessions had, and how each recovery has only been partial: 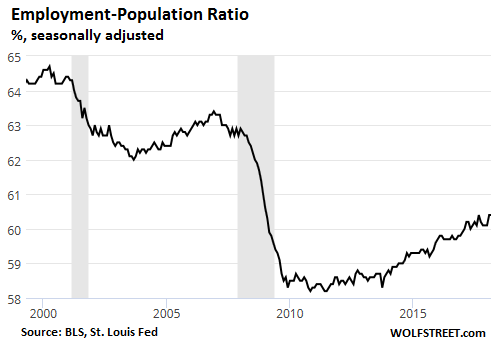 So how about the “unemployment rate?”

This is one of the thorniest issues – but it’s the most often cited number despite its limited usefulness.

This is not the only unemployment rate the BLS offers. It offers six measures of “labor underutilization,” as it calls them, ranging from U-1 to U-6.  The headline measure above – the 4.1% “unemployment rate” – is U-3.

The broadest measure is U-6, which is U-3 plus the people who are “marginally attached to the labor force,” plus those employed part time who want to have full-time employment. This U-6 unemployment rate was 8.0% in March, down from 8.8% a year ago. For some people, this is a more realistic measure.

The key part about these unemployment rates is that they’re not absolute measures of unemployment. They were never designed to be that, and shouldn’t be looked at as such. They’re indicators of trends in the labor market: Are the rates going up or down?

As indicators of trends, the unemployment rates work reasonably well. But they fail as absolute measures of unemployment – and yet, that’s the primary role they have now been shanghaied into by the media coverage of the labor market.

The Fed, when considering its monetary policies, takes a fairly broad view of the labor market and is not easily swayed by a single headline number. And it sees nothing in this report that differs significantly from the trend of the past year.

The sixth month of the Fed’s QE-Unwind has now ended. It appears to be on automatic pilot, clicking along at the pace that accelerated in January, despite the sporadic stock market sell-offs since early February. Read…  Fed’s QE-Unwind Proceeds Despite Stock Market Sell-Offs

72 comments for “The Jobs Report, Sliced and Diced”