What will the Fed do? 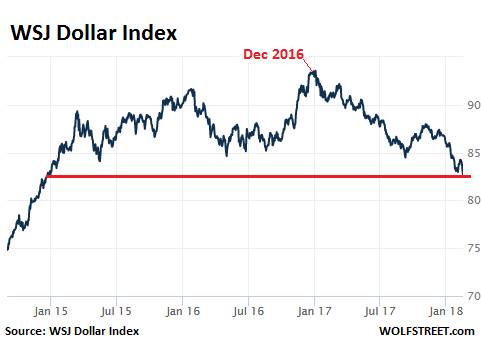 Whatever the reasons may be for the decline of the dollar against this basket of currencies — everyone has their own theory, ranging from the much prophesied death of the dollar to Treasury Secretary Steve Mnuchin’s actively dissing the dollar at every opportunity he gets — one thing we know: The decline started in late December 2016, after the index had peaked at 93.50. And it has not abated since. With the index currently at 82.47, it has fallen nearly 12% over those 14 months.

The dominant factor in the decline of the dollar index is the strength of the euro, the second largest currency. Over those 14 months, the euro, which had been given up for dead not too long ago, has surged 20% against the dollar.

The decline of the dollar is another indication that markets have blown off the Fed, similar to the 10-year Treasury yield falling for much of last year, even as the Fed was raising its target range for the federal funds rate.

The Fed keeps an eye on the dollar. A weak dollar makes imports more expensive and, given the huge trade deficit of the US, adds to inflationary pressures in the US. Over the past few years, the Fed has practically been begging for more inflation. So for the Fed, which is chomping at the bit to raise rates further, the weak dollar is a welcome sight.

Conversely, a surging dollar would worry the Fed. At some point it would get nervous and chime in with the chorus emanating from the Treasury Department and the White House trying to talk down the dollar. If the dollar were to surge past certain levels, and jawboning isn’t enough to knock it down, the Fed might alter its monetary policies and might back off its rate-hike strategies or it might slow down the QE Unwind.

It would never admit that it is reacting to the movement of the dollar because that would be equated with firing up the currency war. But it would not be hard to come up with a pretext for changes in monetary policies. It wouldn’t be the first time.

But the dollar weakness is playing into the Fed’s hand and encouraging the Fed to move forward with its rate hikes and the acceleration on automatic pilot of the QE Unwind.

In the US credit markets, the Fed’s monetary policy shift is finally taking hold. It just took a while. Read… “Financial Stress” Spikes. Markets, Long in Denial, Suddenly Grapple with New Era

93 comments for “The Dollar Spirals Down, Hits Lowest Point Since 2014”