Fed’s monetary policy shift is finally taking hold. It just took a while.

The weekly St. Louis Fed Financial Stress index, released today, just spiked beautifully. It had been at historic lows back in November, an expression of ultra-loose financial conditions in the US economy, dominated by risk-blind investors chasing any kind of yield with a passion, which resulted in minuscule risk premiums for investors and ultra-low borrowing costs even for even junk-rated borrows. The index ticked since then, but in the latest week, ended February 9, something happened: 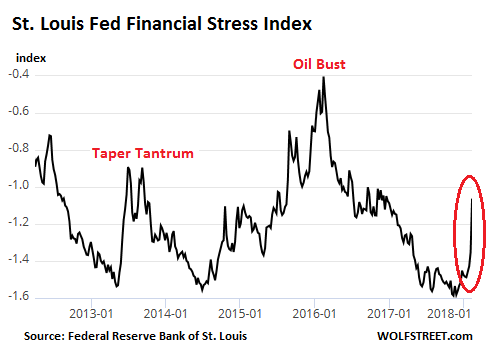 The index, which is made up of 18 components (seven interest rate measures, six yield spreads, and five other indices) had hit a historic low of -1.6 on November 3, 2017, even as the Fed had been raising its target range for the federal funds rate and had started the QE Unwind. It began ticking up late last year, hit -1.35 a week ago, and now spiked to -1.06.

The chart above shows the spike of the latest week in relationship to the two-year Oil Bust that saw credit freeze up for junk-rated energy companies, with the average yield of CCC-or-below-rated junk bonds soaring to over 20%. Given the size of oil-and-gas sector debt, energy credits had a large impact on the overall average.

The chart also compares today’s spike to the “Taper Tantrum” in the bond market in 2014 after the Fed suggested that it might actually taper “QE Infinity,” as it had come to be called, out of existence. This caused yields and risk premiums to spike, as shown by the Financial Stress index.

This time, it’s the other way around: The Fed has been raising rates like clockwork, and its QE Unwind is accelerating, but for months markets blithely ignored it. Until suddenly they didn’t.

This reaction is visible in the 10-year Treasury yield, which had been declining for much of last year, despite the Fed’s rate hikes, only to surge late in the year and so far this year.

It’s also visible in the stock market, which suddenly experienced a dramatic bout of volatility and a breathless drop from record highs. And it is now visible in other measures, including junk-bond yields that suddenly began surging from historic low levels.

The chart of the ICE BofAML US High Yield BB Effective Yield Index, via the St. Louis Fed, shows how the average yield of BB-rated junk bonds surged from around 4.05% last September to 4.98% now, the highest since November 20, 2016: 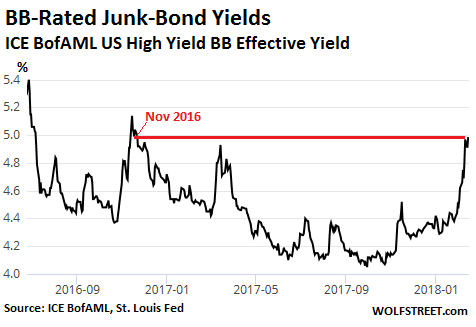 But a longer-term chart shows just how low the BB-yield still is compared to where it had been in the years after the Financial Crisis, and how much more of a trajectory it might have ahead: 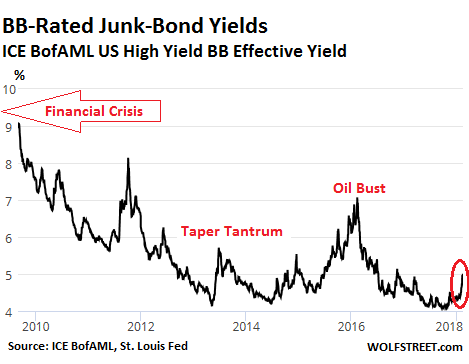 When yields rise, it means that bond prices are dropping. And so the selloff that has been hitting the Treasury market is finally creeping into the riskier parts of the corporate bond market, which had been in denial of the Fed’s efforts to tighten financial conditions via rate hikes and the QE Unwind.

But at -1.06, it remains below zero. In other words, financial conditions remain extraordinarily easy. This is clear in a long-term chart of the index that barely shows the recent spike, given the magnitude of prior moves: 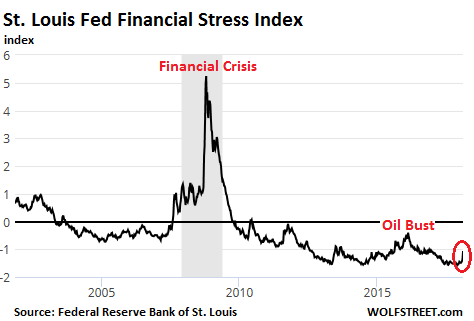 This is precisely what the Fed wants to accomplish. The market is just slow in reacting to a shift in monetary policies. But when it begins to react, the adjustment can be sudden and large. Given that the Fed wants to “normalize” financial conditions – where these kinds of measures return to normal levels – there will have to be quite a bit more tightening in the markets before the market catches up with the Fed’s intentions. And the Fed itself is likely behind the curve – in which case it too will have to do some catching up. So these adjustments in yields and prices are coming. And yesterday’s reports didn’t help at all. Read…  Retail Sales, Inflation Add Fuel to Fed’s Rate-Hike Trajectory, Treasuries Dive as Yields Surge