What would the Fed do?

The Dow fell 4.1% today to 23,860, plunging 480 points in the last hour. This 1,033-point drop was the worst drop since, well, the 1,175-point drop on Monday, which had been, as it was endlessly repeated, the biggest point-drop in history – and irrelevant at these ludicrously inflated levels of the industrial average.

This used to be standard practice after a dizzying surge of the type we had. Unwinding the last 10 weeks of a rally is no big deal. But those spoiled by the record 410-day streak without a 5% selloff are now struggling with letting go of an illusion: that stocks are a low-risk high-reward bet.

But there is something that is starting to get a little ugly. Today’s selloff has crushed again the most cherished way of making money in the stock market since the Financial Crisis: dip buying. There were three messy selloffs over a span of five trading days: Friday, Monday, and today; each time, prior dip buyers that didn’t get out of the way got slammed.

The selloff is starting to show up on long-term charts. This chart, which captures the bottom of the last crash, shows just how steep the current selloff has been in point terms – 187 points in five trading days – compared to the selloffs since 2009, but in percentage terms it fits right in: 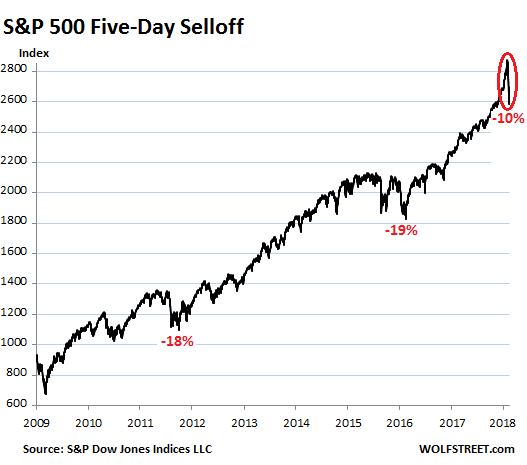 I said on Monday that the dip buyers would come in. On Tuesday, courageous dip buyers rode to glory during very volatile trading that ended with a massive surge. But those that didn’t get out of the way got crushed today.

Now the market is waiting for the new wave of dip buyers. And they will show up. Wall Street is encouraging them to. The whole industry is.

I just got an email from Bankrate.com with a commentary on today’s “slide.” These folks don’t usually comment about stocks. But today, their chief financial analyst Greg McBride came out swinging: “With such strong economic and earnings fundamentals, each dip is a buying opportunity,” he said.

This has been the rule for years. Dip-buying has been rewarded since March 2009. And this rule will continue to get trotted out. Now that the market is down 10%, it might even attract larger funds set up to profit from big selloffs. No one knows when they will show up in numbers large enough to reach critical mass. But they will, and they will cause the index to jump. It’s only a question of when.

But the trend has turned ugly. Dip-buyers that didn’t get out of the way quickly got crushed each time. There will be wave after wave of dip-buyers, but if they keep getting crushed, they will wait longer and longer before they jump in, and they will have shorter and shorter time horizons, jumping out more quickly and more nervously. If this goes on long enough, and dip-buyers lose interest, that’s when the market gets in real trouble. But it will take many more waves of crushed dip buyers before it gets there.

What would the Fed do?

Those clamoring for the Fed to step in and do something sound ridiculous. “Silly crybabies” — that’s what comes to mind. Stock indices quadrupled since March 2009, and the five-day 10% swoon so far represents only a minor dip in the long-term picture. See chart above.

There is no telling what a spooked Fed might do, but this selloff is far from spooking the Fed. The Fed has been attempting to tighten “financial conditions,” which include yields and risk premiums, which had been at record lows, and which the Fed has been trying to raise. The Fed has also mentioned elevated asset prices as an issue and is likely welcoming a civilized decline. A disorderly crash would spook the Fe — but I think, for now, most voting members of the policy-setting FOMC will brush off this sort of post-blistering-rally selloff.

And who was selling stocks and who was buying them last week just before the selloff on Monday? Answers emerge. Read…  Who Was Selling Stocks Last Week Before the Monday Rout?

108 comments for “Stocks Get Messy, Dip-Buyers Get Crushed Again”