Rents are on the move, but not in the same direction.

These declines from head-spinner peaks, in a city where housing costs turned officially into a “housing crisis” years ago, are not much of a relief for renters and not yet a headache for landlords, but a sign that new supply from the construction boom – most of it higher end – is having an effect.

Those declines do not include incentives, such as “1 month free” or “2 months free,” which reduce the effective rent for the first year by 8% or 17%.

The data is based on asking rents in multifamily apartment buildings. Zumper gleans this data from active listings in cities across the country and aggregates it into its National Rent Report. The data does not include single-family houses and condos on the rental market. Unlike some other types of rent reports, this data includes asking rents from new construction.

Biggest trouble spots among the most expensive markets.

No metro among the 12 most expensive major rental markets set new highs in January. But double-digit year-over-year gains were booked in Washington DC, Los Angeles, and San Diego. In this table, the shaded area indicates peak rents and the movements since then. Note the number of double-digit declines from the peaks: 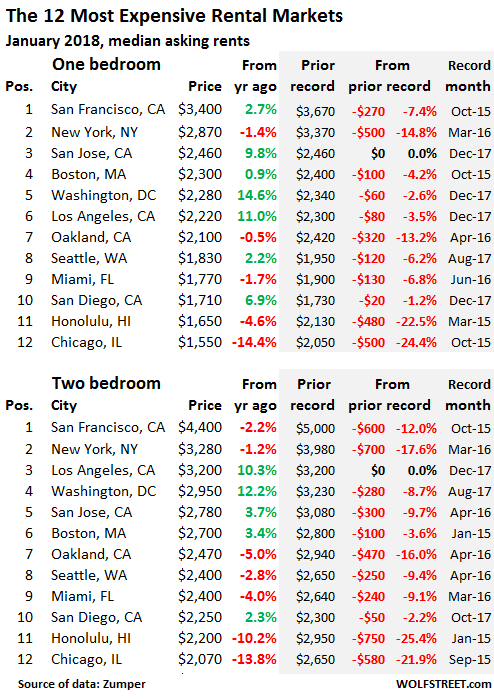 Seattle faces an onslaught of supply. Nearly 12,000 apartment units were completed in 2017 in the metro area, just counting buildings with over 50 units. There are nearly 25,000 units under construction and an additional 35,000 units in the development pipeline. Nearly all of it is higher end. This does not even include smaller buildings or condos that might show up on the rental market [Once Hot Seattle Apartment Market Hit by Onslaught of Supply].

Other major cities – including New York City and San Francisco – have experienced similar construction booms of mostly of higher-end apartments.

But rents soar in many mid-tier metros.

In “mid-tier” metros – “mid-tier” in terms of the rent – asking rents are decidedly a mixed bag, plunging in some cities such as New Orleans (1BR rents -5.3%, 2BR rents -15.6%) but soaring in others. Here are some markets with double-digit year-over-year increases (1 BR and 2 BR apartments):

Starting in November, a phenomenon became strongly apparent in the data: a divergence between 1-BR rents and 2-BR rents, with 1-BR rents rising faster or at least declining more slowly than 2-BR rents.

In other words, starting in November, on average, the one-bedroom rental market has become hotter or at least “less cold,” depending on the city, than the two-bedroom market.

According to the Zumper National Rent Price Index, the median one-bedroom asking rent across the US soared 7.6% in November year-over-year, 9.9% in December, and 8.8% in January, while two-bedroom rents were rising about 2.5% over the same period. The blue line (1-BR year-over-year rent increase) shows this phenomenon: 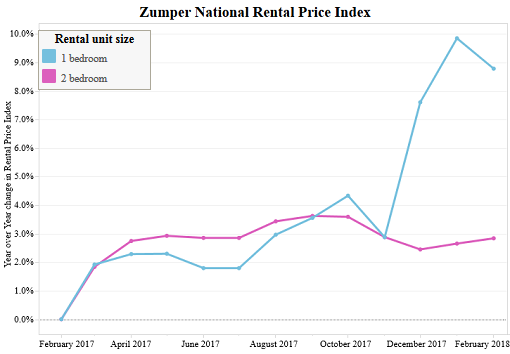 Below is Zumper’s list of the top 100 most expensive rental markets and their median asking rents. You can look for a specific city by using the search function in your browser:

48 comments for “Double-Digit Drama on the Ground for Renters”