Or what the averages are hiding.

We will start with income and see what’s left over, and for whom.

Personal income increased by 4.1% in December from a year earlier, the Bureau of Economic Analysis reported today. This includes all income received by all persons from all sources, such as from labor, financial assets (dividends and interest income but not capital gains), business activities, homeownership (rentals), government transfers, etc.

Per-capita “real” personal income – which accounts for 0.71% population growth in 2017 and measures income per individual – rose only about 1.7%. If the inflation measure even slightly understates actual inflation as experienced by these individuals, their personal income growth might go away entirely.

Not everyone is getting this income growth equally.

But consumers, no matter what their income levels, are trying to do their best to prop up the economy, upholding an American tradition. And they’re spending more, the Bureau of Economic Analysis reported today.

Personal consumption expenditures (PCE) – the goods and services purchased by everyone living in the US – rose 4.6% year-over-year. Adjusted for inflation, spending grew by 2.8%.

The personal saving rate – disposable income less personal outlays – fell to 2.4%. This was even below the savings rate of 2.5% in November 2007, and the lowest savings rate since September 2005: 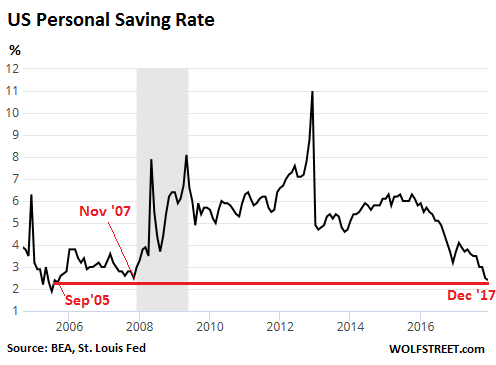 In terms of dollars, personal saving dropped to a Seasonally Adjusted Annual Rate of $351.6 billion, meaning that at this rate in December, personal savings for the whole year would amount to $351.6 billion. This is down from the range between $600 billion and $860 billion since the end of the Financial Crisis.

But who is – or was – piling up these savings?

Numerous surveys provide an answer, with variations only around the margins. For example, the Federal Reserve found in its study of US households:

Similarly, Bankrate found that only 39% of Americans said they’d have enough savings to be able to cover a $1,000 emergency expense. They rest would have to borrow, sell, cut back on spending, or not deal with the emergency expense.

All these surveys say the same thing: about half of Americans have little or no savings though many have access to some form of credit, including credit cards, installment loans, pawn shops, payday lenders, or relatives.

So what does it mean when the “saving rate” declines?

It boils down to this: most of the positive saving rate, with savings actually increasing, takes place at the top echelon of the economy – at the top 40%, if you will – where households are flush with cash and assets and where the saving rate is very large.

But the growth in borrowing for consumption items (the negative saving rate) takes place mostly at the bottom 60%, where households are living paycheck-to-paycheck even if those paychecks are reasonably large and even if life is comfortable at the moment.

When the overall saving rate drops it means that the surge in borrowing at the bottom 60% or so is no longer outweighed by the growth in savings at the top.

But economic risk lies at the lower echelons – with people who cannot afford to lose their jobs. If something goes wrong in the economy, it’s at there where defaults are happening and where job losses hurt the most. This is why these low saving rates were a red flag before the Great Recession – not because households at the top were saving less but because households in the lower 60% of the economy were stretching further to borrow to fund their spending and to deal with existing debts.

Nine years of scorched-earth monetary policies come home to roost. Read…  Why the Next Downturn “Will Not Look Like 2008”

136 comments for “What Does it Mean, Saving Rate drops to 12-Year Low when 50% of Americans Don’t Have Savings?”