Transportation Recession of 2015 and 2016 is just an Ugly Memory.

The transportation recession of 2015 and 2016 has receded into memory, and the trucking industry is hopping and railroads are getting their share, rates are surging, and so are costs, and the money is flowing. The Cass Freight Index, which tracks US shipment volumes by all modes of transportation, rose 7.2% year-over-year in December, to the highest level for any December since 2007.

The Cass Freight Index is not seasonally adjusted, with peaks in early summer for back-to-school season and in September during shipping season ahead of the holiday sales season. December marks the end of shipping season, and shipments normally plunge from November. But in December 2017, instead of plunging, shipments barely edged down from November. In the chart, the difference between 2017 (red line with black markers) and 2016 (black line with red markers) shows the severity of the transportation recession and the powerful recovery since: 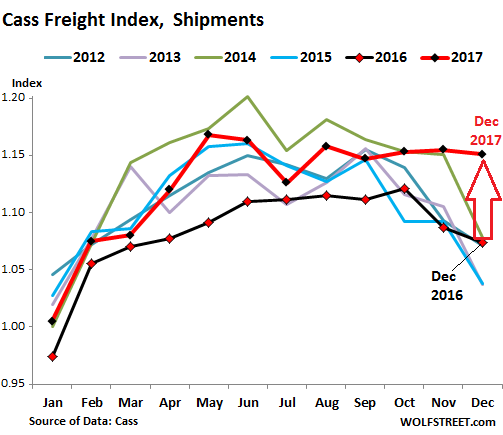 The green line in the chart above represents 2014, which had been a banner year for US transportation until it began to unravel at the end of 2014 and descended into the full-blown transportation recession covering much of 2015 and 2016.

The index is based on “more than $20 billion” in annual freight transactions, according to Cass Information Systems. It does not cover bulk commodities, such as oil and coal but is focused on consumer packaged goods, food, automotive, chemical, OEM, and heavy equipment, shipped via truck, rail, barge, and air.

The chart below of year-over-year percentage changes in the Cass Freight Index for shipments shows the severity of the transportation recession in 2015 and 2016 — which I covered, including in May 2016, with Freight Rail Traffic Plunges: Haunting Pictures of Transportation Recession. The chart also shows just how powerful the recovery has been: 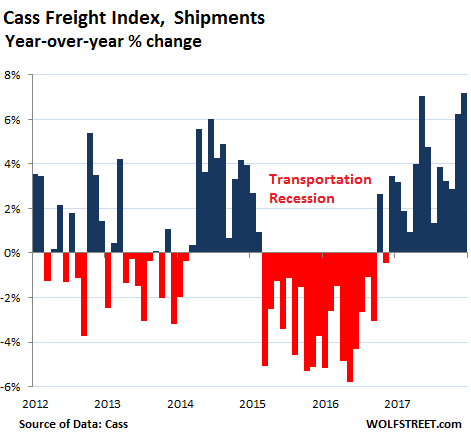 The e-commerce boom gets part of the credit, with e-commerce sales surging 15.5% in the third quarter of 2017, according to the Commerce Department, and 18% over the holiday period, according to Adobe. Cass: “Data continues to suggest that the consumer is finally starting to spend a little, albeit not with brick and mortar retailers.”

The report also pointed out that, with the transportation recession over, “freight seems to be gaining momentum in most segments.” It cites the DAT Dry Van Weekly Barometer – tracking the dynamics of van trailers hauled by Class 8 semi-trucks – which “is giving us real‐time indications of stronger demand and tighter capacity in this key freight group.” (Click to enlarge): 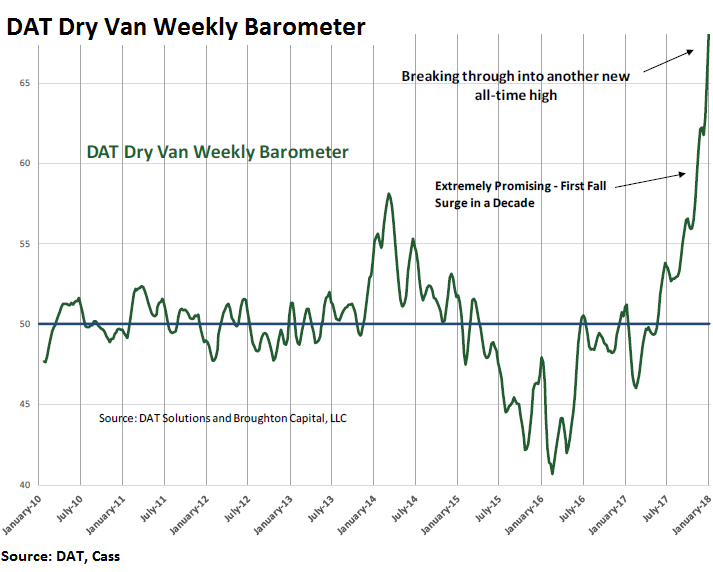 With shipping volumes rising, and shipping rates rising on top of it, the amount spent on shipping has surged. The Cass Expenditure Index, which tracks the amounts spent on freight for all modes of transportation, soared 16% year-over-year in December (2.638), the highest in the data series going back to 1999.

The chart below shows how spending on freight in 2017 (red line with black markers) has risen throughout the year, even blowing by the normal seasonal decline in December, to produce the strongest December in the data series going back to 1999, while freight spending in 2016 – the black line with red markers at the bottom – had been mired in the ugly transportation recession: 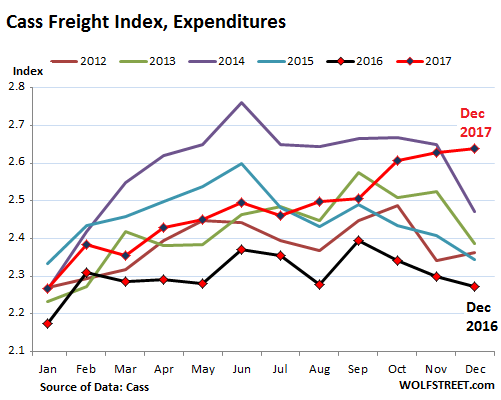 “December’s 16.0% increase clearly signals that capacity is tight, demand is strong, and shippers are willing to pay up for services to get goods picked up and delivered in modes throughout the transportation industry,” the report explains.

Fuel prices have surged too, “up as much as 75%” on a year-over-year basis. Fuel surcharges are included in the Expenditures Index. But the report points out that the year-over-year increase in spending “attributable to fuel is now diminishing.” And Cass is “seeing some improvements in the pricing power of truckers and intermodal shippers.”

The increased costs of shipping are either filtering into the prices of goods and into consumer price inflation, or, if they cannot be passed on directly or indirectly, they are absorbed by the companies paying for them. With e-commerce rocking and rolling and with many other parts of the economy tagging along – the auto sector being one of the exceptions – the transportation sector is for now scrambling to meet demand.

Brick-and-mortar retailers have been in full meltdown for the past two years. Many of them were owned PE firms that have doomed them. Here they are…. The Private Equity Firms at the Core of Brick & Mortar Retail Bankruptcies

36 comments for “US Freight Spending, Shipments, Rates & Costs all Surge”