The Bank of Canada raised interest rates another 25 basis points last week. It was the third time in the past six months. Rates have more than doubled in that time, going from 0.50% to 1.25%. This hike was baked into the economic data, and now it’s getting baked into the debt loads of Canadian households.

This is critically important, considering the context of the current situation. Interest rates have been at historically low emergency levels since the Financial Crisis. This has allowed households to absorb elevated house prices and a record amount of debt. Each rate hike reduces the ability to service that debt. 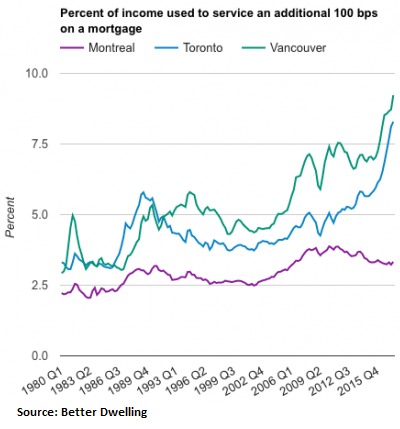 Further, the newly required stress tests for variable-rate mortgages require that applicants qualify at the minimum specified rate of the stress test, which just jumped from 4.99% to 5.14%, or at the actual rate they’re borrowing at PLUS 2%, whichever is greater.

A five-year fixed rate (rate adjusts in five years from when the mortgage was taken out) at most banks is now 3.54%. So most borrowers will be stress tested closer to 5.54%. Ouch.

The BOC’s rate hike will immediately impact the roughly 30% of existing Canadian mortgages with variable rates that adjust nearly instantly. And it will also put pressure on the C$211-billion HELOC phenomenon, whose outstanding balances have surged 500% since the year 2000.

The Bank of Canada is well aware of the current situation, and while they have assured Finance Minister Bill Morneau further rate hikes won’t cripple the economy, they have warned him of a potential household deleveraging.

It remains to be seen how the resilient housing market will digest the changes. It’s early. By Steve Saretsky, Vancouver, Canada, Vancity Condo Guide

The Canadian Housing & Debt Bubble ascends to the next level of risk. Read…  Canadian Homeowners Take Out HELOCs to Fund Subprime Buyers Unable to get a Mortgage