Tesla gets crushed by the big boys.

Compared to 2015, sales fell by 249,033 vehicles, or 1.4%. These sales are vehicles delivered by dealers to their customers, or delivered by automakers directly to large fleet customers, as reported by Autodata.

For the big three US automakers and some import brands it was the second year in a row of sales declines (two-year percent change from 2015):

The table below shows new-vehicle sales by automaker, sorted by total sales in 2017 (gray column). Automakers with declining sales in 2017 are marked in red. The green column shows the two-year percentage change from 2015: 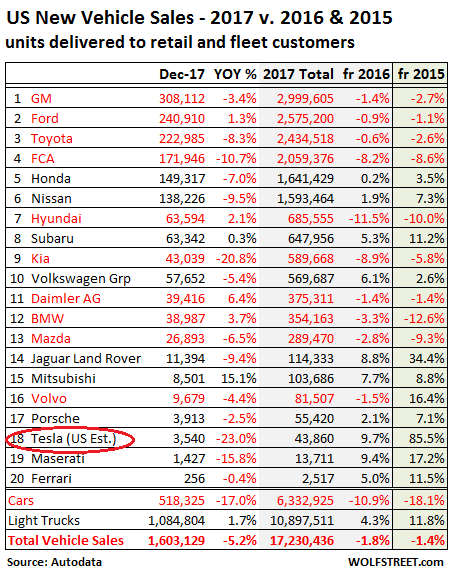 Turns out that replacement demand for new vehicles after Hurricane Harvey was strong, but not nearly strong enough to pull out the year for total US auto sales, and what demand there has been will peter out going forward.

A special word about Tesla.

Tesla, in 18th position near the bottom of the list, wants to play with the big boys, but doesn’t want people to know on a monthly basis just how inconsequential its US sales are. Since it refuses to disclose how many vehicles it delivered that month in the US, the industry has to estimate Tesla’s monthly US sales.

Instead of December sales in the US, Tesla disclosed global sales for the fourth quarter on Wednesday: 15,200 Model S, 13,120 Model X, and just 1,550 Model 3, some of which have been “sold” to its own employees for testing purposes. So in total, Tesla sold 29,870 vehicles globally in Q4. We still don’t know how many vehicles it sold in the US in December. Hence the estimate.

But you have to admit that Tesla’s endless hype works. Hence, Tesla’s market capitalization of a ludicrous $53 billion is among the highest of the Big Boys.

Among the US Big Boys…

GM – facing no “production bottlenecks” and no “manufacturing hell,” as Tesla and its CEO called their own mess – delivered 3,227 Bolt EVs in December, bringing the total for the year to 23,297.

This caps a year when even record incentives by manufacturers and two horrible hurricanes were not able to create enough demand to keep total sales from falling below the level of two years ago. And headwinds are building for 2018, among them:

So if the US economy keeps humming along nicely, it’s likely that auto sales in 2018 will be below sales in 2015. If something slightly untoward happens, however, sales could end up below where they’d been in 2014.