But rents tank in the most expensive metros. Even Seattle cools off, awash in new supply.

In New York City, the second most expensive major rental market in the US, the median asking rent for one-bedroom apartments fell 3.7% from a year ago to $2,870. For two-bedrooms, it fell 5.0% to $3,230. Since the peak in March 2016, asking rents have plunged respectively 14.8% and 18.8%. A modicum of relief for renters, a headache for landlords, a sign that new supply from the construction boom is having an effect, and proof that even in New York, you can inflate rents only so far.

The data is based on asking rents in multifamily apartment buildings, gleaned from “over one million active listings” that Zumper aggregated in its National Rent Report. Not included in the data are single-family houses and condos on the rental market. Also not included are incentives, such as “1 month free” or “2 months free,” which reduce the effective rent for the first year by 8% or 17%.

The data includes asking rents from new construction. In many cities, high-rise apartment and condo buildings have sprouted like mushrooms. These units are now showing up in large numbers on the rental market, and landlords need to fill them – hence more pressure on rents.

In Oakland, whose rental market had been inflated by San Francisco’s housing refugees, median rents took serious hits recently but in December ticked up year-over-year. From their peak in April 2016, one-bedrooms are down 10.7% and two bedrooms are down 11.6%.

In this table of the 12 most expensive major rental markets, the shaded area indicates peak rents and the movements since then. Note the number of double-digit declines from prior peaks: 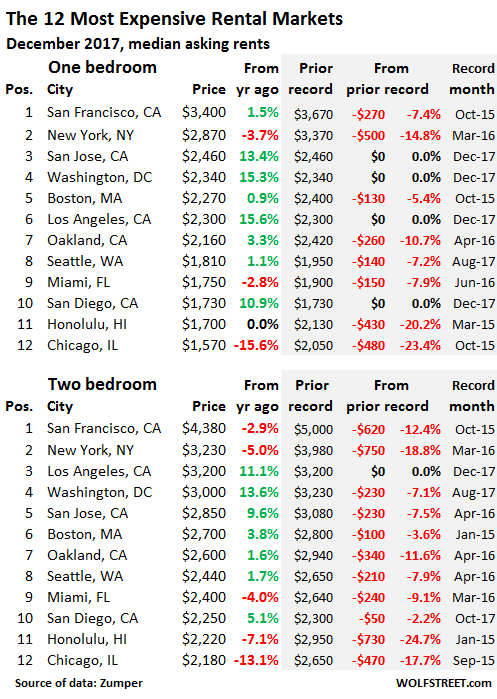 A special word about Seattle.

The median asking rent for one-bedrooms in Seattle is now down 7.2% from the peak in August last year and the median two-bedroom is down 7.9% from the peak in April 2016. It seems the declines, though still small compared to the surges of the past, are more than just a seasonal blip.

Seattle’s economy is strong, but in 2017, its epic construction boom completed nearly 12,000 new units, counting only buildings of 50 or more apartments. This does not even include condos that have been acquired by investors and have reappeared on the rental market. This supply of new units continues and will apply more pressure on rents.

But rents jump in many mid-tier metros.

In many “mid-tier” metros – “mid-tier” in terms of the rent – asking rents have soared in the double digits year-over-year. Here are some standouts (one-bedroom and two-bedroom apartments):

And suddenly, a new phenomenon appears.

In fact, in 68 of the 100 top most expensive rental markets (see list below), one-bedroom rents:

This means that the one-bedroom rental market on average is far hotter or at least “less cold” – depending on the metro – than the two-bedroom market. This phenomenon started in November and expanded in December.

This is borne out by the Zumper National Rent Price Index: The median one-bedroom asking rent across the US soared 4.6% in November from October and another 2.1% in December from November, and ended the year up a steamy 9.8% year-over-year at $1,255. But the index for two-bedroom rents rose only 2.2% for the entire year. The blue line shows this two-month spike in one-bedroom rents (chart from Zumper): 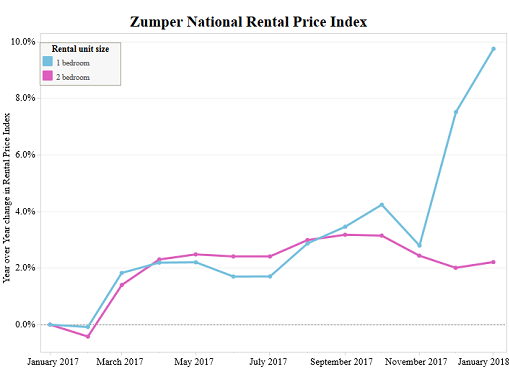 This divergence between one-bedroom and two-bedroom asking rents is not hurricane-related but is spread across the country. It is also peculiar that the divergence materialized all of a sudden in November and didn’t revert in December but instead widened further.

Below is Zumper’s list of the top 100 most expensive rental markets. Check out your city (click to enlarge).

The Case-Shiller National Home Price Index jumped 6.2% year-over-year and is now 6% above the crazy peak in July 2006 of Housing Bubble 1 and is up 46% from the trough of Housing Bust 1. Read… The US Cities with the Biggest Housing Bubbles 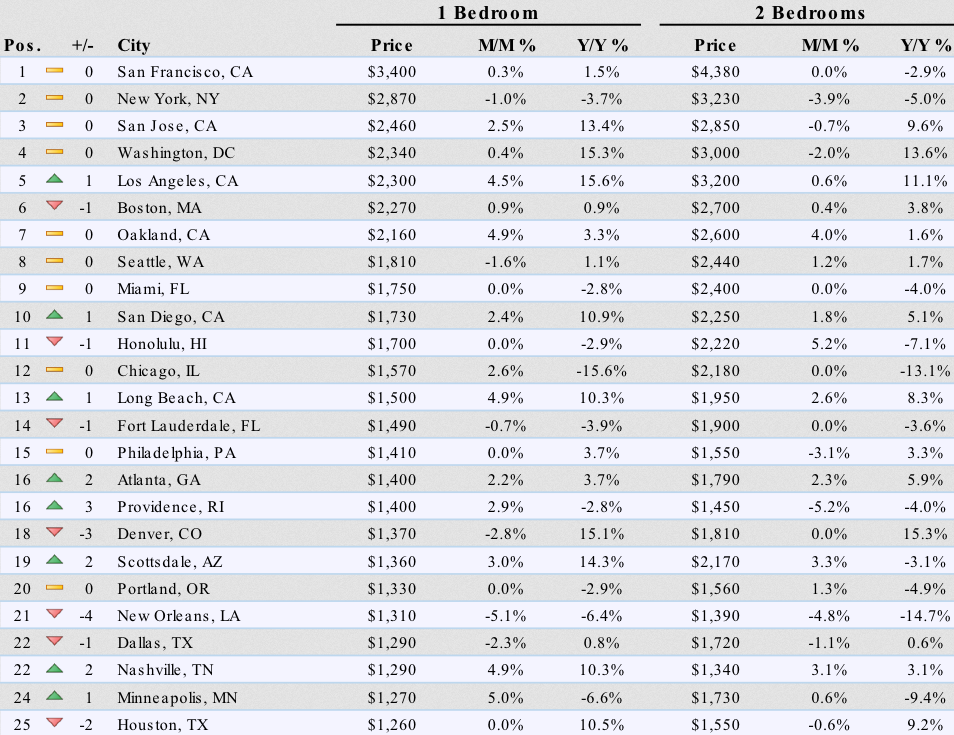 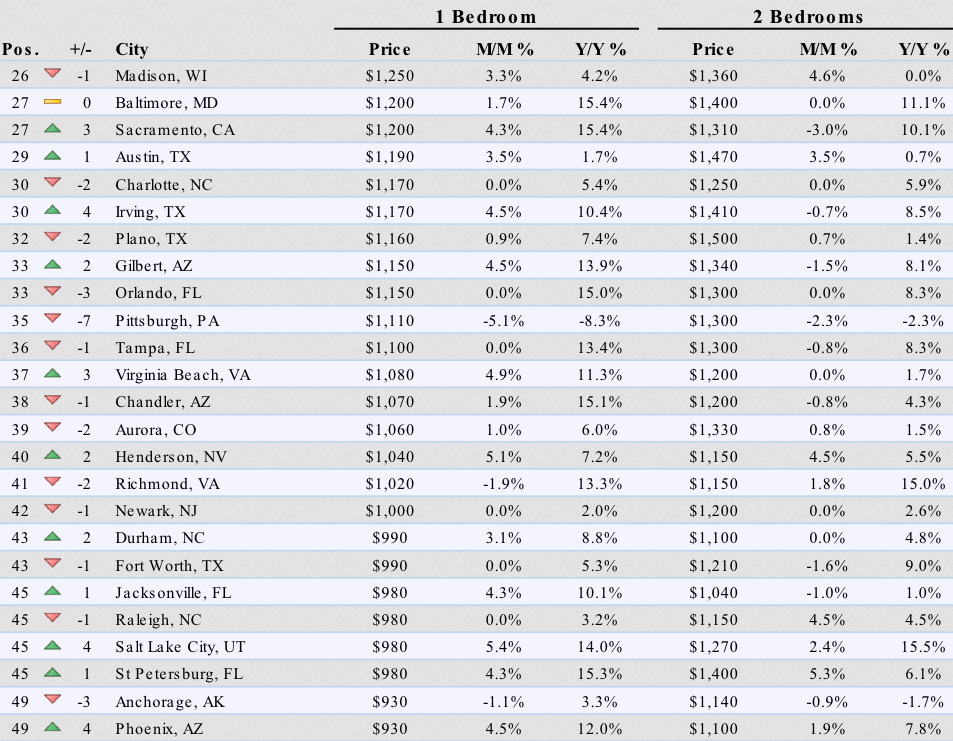 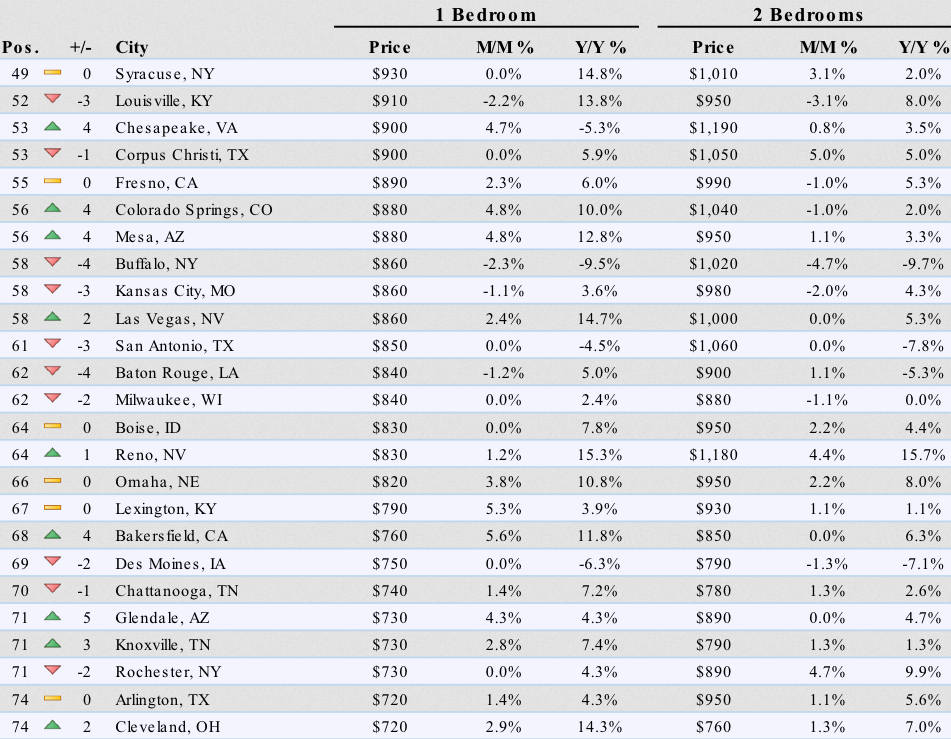 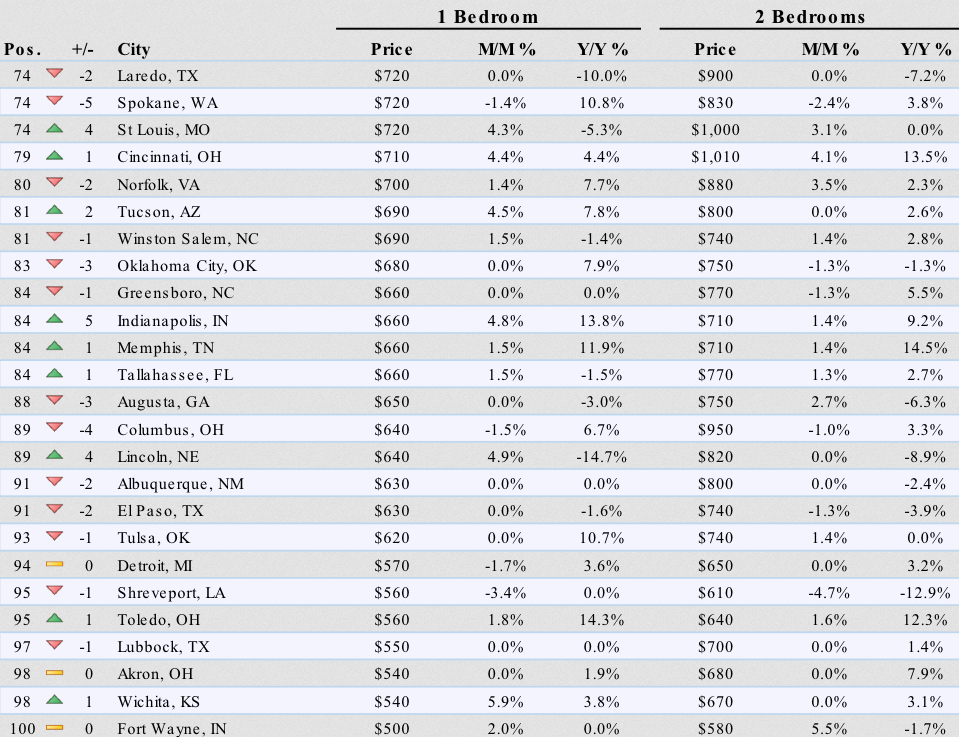 53 comments for “Suddenly, US Rental Markets Diverge by Bedrooms”