But red-hot Seattle has first back-to-back declines since 2014!

The S&P CoreLogic Case-Shiller National Home Price Index for October, released this morning, jumped 6.2% year-over-year (not-seasonally-adjusted), up from 6.1% in September. The index has now surpassed by 6.0% the crazy peak in July 2006 of Housing Bubble 1 and is up 46% from the trough of Housing Bust 1: 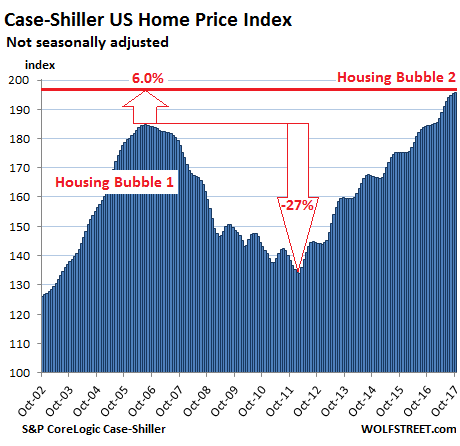 Real estate prices are subject to local dynamics but are impacted by national  and even global factors, such as the consequences of monetary policies, particularly in places where this liquidity washes ashore. This creates local housing bubbles. And they operate each on their schedules. When enough of these local bubbles occur simultaneously, it becomes a national housing bubble as depicted by the chart above.

The Case-Shiller Index is based on a rolling-three month average; today’s release was for August, September, and October data. Instead of median prices, the index uses “home price sales pairs.” For instance, it takes sales data from a house that sold in 2011 and then again in 2017, incorporates other factors, and uses algorithms to adjust the price movement into an index data point. The index was set at 100 for January 2000. An index value of 200 means prices as figured by the algorithm have doubled since then.

Here are the standouts among the housing bubbles in major metro areas:

The index for the Boston metro area ticked down on a monthly basis, the first decline after 22 months in a row of increases. It’s still up 6.9% year-over-year, a slightly slower pace then the 7.2% year-over-year surge in the prior month. During Housing Bubble 1, it soared 82% from January 2000 to October 2005, before the plunge set in. Now, after six years of relentless price increases, the index exceeds the peak of Housing Bubble 1 by 12.7%: 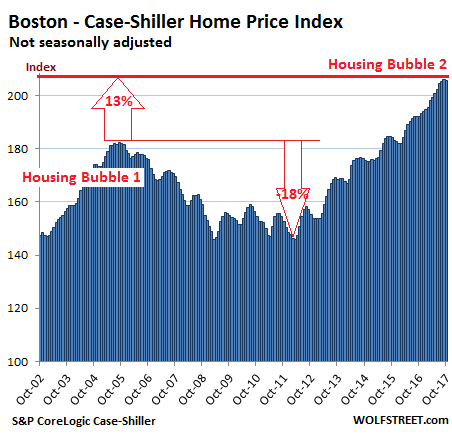 The Case-Shiller home price index for the Seattle metro declined again by a tad on a month-to-month basis — first back-to-back declines since the end of 2014! However, the index is not seasonally adjusted, and a slight downturn this time of the year was not unusual before 2015. So this may be a sign that the housing market in Seattle is returning to some seasonal patterns, rather than just spiking no matter what. The index is up a breath-taking 12.7% year-over-year, 20% from the peak of Housing Bubble 1 (July 2007), and 79% from the trough of Housing Bust 1 in February 2011: 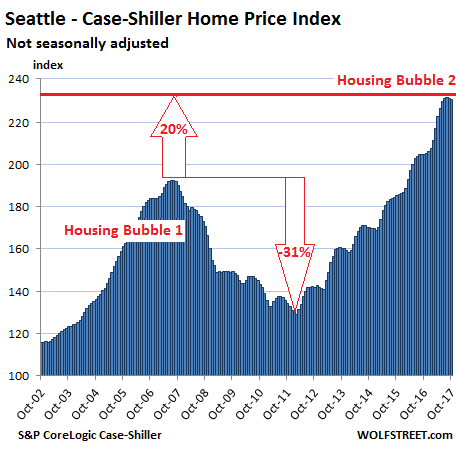 The index for the Denver metro rose again on a monthly basis, the 24th monthly increase in a row. It is up 6.6% year-over-year and has surged 44% above the prior peak in the summer of 2006. Note that Housing Bubble 1 and subsequently Housing Bust 1 mostly spared Denver. But in 2012, Housing Bubble 2 erupted with a vengeance: 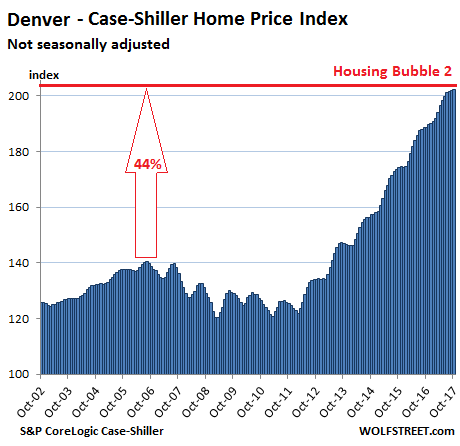 The index for the Dallas-Fort Worth metro rose again on a monthly basis — the 45th month in a row of increases. It is up 7.1% year-over-year and 43% from the prior peak in June 2007. Similar to Denver, Housing Bubble 1 and Housing Bust 1 mostly spared North Texas. But prices began to surge in 2012: 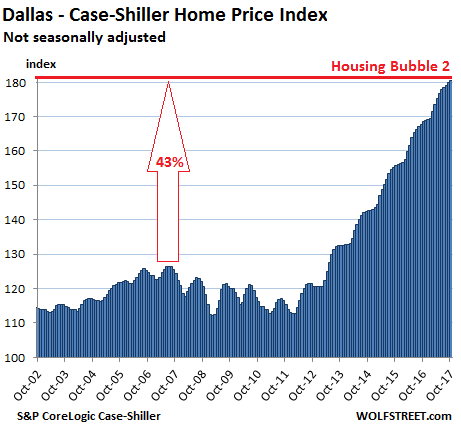 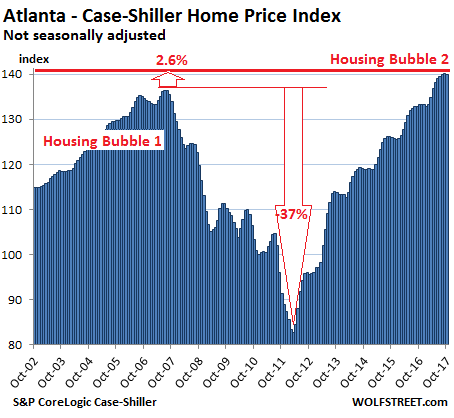 The Case-Shiller index for Portland declined a tad, and is now back where it had been three months ago — the first monthly decline since September 2016, and in line with seasonal price patterns. The index is up 7.1% year-over-year and 73% in five years. It is now 20% above the crazy peak of Housing Bubble 1 and has ballooned 123% since 2000: 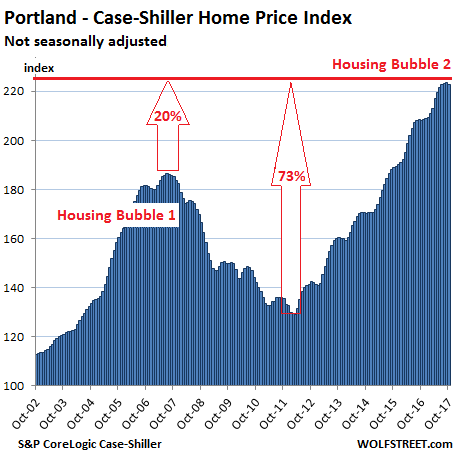 The index, which covers the county of San Francisco plus four Bay Area counties — Alameda, Contra Costa, Marin, and San Mateo (the northern part of Silicon Valley) —  jumped 1.2% for the month. It had however ticked down in August. It’s up 7.7% year-over-year, up 29.5% from the crazy peak of Housing Bubble 1, and up 84% from the end of Housing Bust 1. The index has surged 148% since 2000: 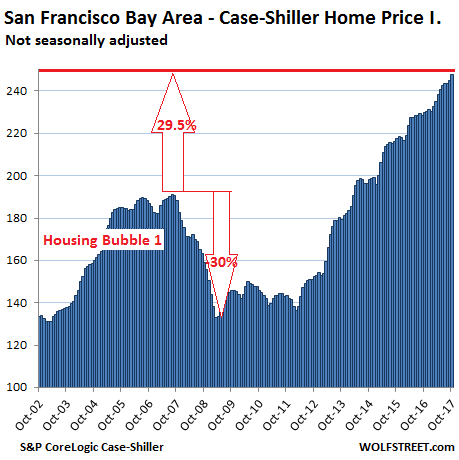 The index for the Los Angeles metro ticked up again for the month and is up 6.5% year-over-year. The sugar-loaf Housing Bubble 1 was in a category of its own, with home prices skyrocketing 174% from January 2000 to July 2006, before collapsing and surrendering much of the gains. The index has skyrocketed since the end of Housing Bust 1 and is getting closer to beating the prior insane peak, but is still 2.0% shy: 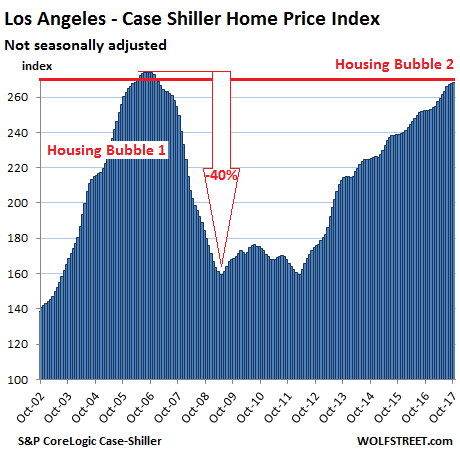 These charts are visual depictions of asset price inflation. A house whose price jumps 20% in three years hasn’t gotten 20% bigger. What happened is that the purchasing power of the dollar with regards to these assets — since “homes” have become a global asset class — has been demolished by the Fed’s monetary policies that generated little or no wage inflation, moderate consumer price inflation, and extraordinary asset price inflation. In other words, the value of labor (wages earned) with regards to assets, such as homes, has been crushed, and housing costs in general, including rents, are consuming an ever larger slice of wages. This has turned into the “affordability crisis” now gripping many of the big urban areas in the US. Which can hardly be the foundation of a healthy economy.

The new tax law will have a big impact on the housing market, the magnitude of which has not been fully appreciated just yet. Read… What Will the Tax Bill Do to the Housing Market?

37 comments for “The US Cities with the Biggest Housing Bubbles”