Where will it go from here?

Today is another down-day for the US dollar, the third in a row, capping a nasty year for the dollar, the worst since 2003. In 2017, the dollar dropped 7% against a broad basket of other currencies, as measured by the Trade Weighted Dollar Index (broad), which includes the Chinese yuan which is pegged to the US dollar. It was worse than the 5.7% drop in 2009, but not as bad the 8.5% plunge in 2003.

Here are the past four years of the dollar as depicted by the Broad Trade Weighted Dollar Index, which tracks 26 foreign currencies. The index is updated weekly, with the last update on December 26, and has not yet captured the declines of past three days: 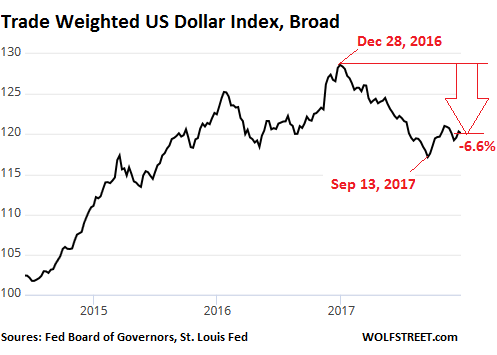 As per the narrower Dollar Index [DXY], the dollar fell 10.2% for the year. The DXY measures the dollar only against the euro, Japanese yen, Canadian dollar, British pound, Swedish krona, and Swiss franc, but not against the currencies of other major US trading partners, such as China and Mexico.

Thus the dollar has accomplished a feat in 2017: During a year when the Fed continued with clockwork regularity its efforts to raise interest rates “gradually,” and when it kicked off the QE Unwind, thus taking dollar liquidity out of the market, the dollar, instead of rising in response, had its worst year since 2003.

In the second half of 2016, the Fed signaled fairly clearly that it would get serious about raising its target range for the federal funds rate. In the fall of 2016, Fed governors started suggesting that the QE unwind would need to start in 2017. So when the Fed raised rates in December 2016 for the first time in a year and for the second time in 10 years, there was absolutely no surprise. Markets had expected it.

And foreign currency traders had driven up the dollar in advance: From May 2016 through the end of 2016, the broad Trade Weighted Dollar Index jumped about 9% and the DXY 10%!

This move in the dollar was paralleled roughly by the move in 10-year Treasury securities, whose yield, after falling to a historic low of 1.37% in early July, soared in the second half, nearly doubling to 2.6% by the end of the year.

Then, having successfully front-run the Fed’s actions in 2017, it was time to take some money off the table. As 2017 dawned on the markets, the dollar and 10-year Treasury yields both fell, despite the Fed’s consistent tightening.

These moves have only encouraged the Fed. Had the dollar skyrocketed in 2017, and had long-term yields soared in response to the QE unwind, in a replay of the Taper Tantrum, some Fed governors might have felt a little queasy about their new monetary policies. But the opposite happened.

Where does this leave the dollar for 2018?

I think much of the damage to the dollar exchange rate against other currencies has been done. The new Fed will continue to tighten, possibly in a more hawkish manner than in 2017.

Nothing like this QE unwind has ever happened before in US history, so the results could vary, as they say.

The dollar is likely to respond to this tightening US monetary environment in 2018 with a bounce, especially given the sell-off in 2017 following the front-running in the second half of 2016. And if markets suddenly come to the realization that tightening is real and will continue, which they haven’t yet, the bounce in the dollar – along with long-term yields – could happen abruptly.

This can happen only during the late stage of a bubble. Read…  I’m in Awe of How Far the Scams & Stupidities around “Blockchain Stocks” are Going

87 comments for “US Dollar Has Worst Year since 2003, Defying the Fed”