The Producer Price Index for final demand – which tracks prices received for goods, services, and construction from the perspective of the seller, as opposed to a measure like CPI which tracks prices paid from the perspective of the buyer – jumped 0.44% seasonally adjusted in November from October, after having risen 0.44% in October and also 0.44% in September, the Bureau of Labor Statistics reported today. After those three sharp monthly increases in a row, the index has now risen 3.1% year-over-year (not seasonally adjusted), the fastest increase since January 2012. 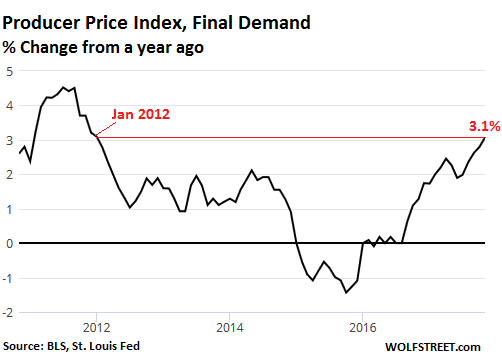 In the chart above, note the impact of the collapse of energy prices in 2015 and early 2016, which was just a temporary blip on the longer-term inflation scale.

In its “MoneyBeat” email sent out this morning hours before the PPI data was released, the Wall Street Journal said that the consensus estimate for the PPI was a 0.3% increase from October. “A gauge of U.S. business prices is expected to have ticked lower last month after a stronger-than-expected reading in October,” it said and added, “The index has picked up recently after a stretch of weakness earlier in the year.”

So the PPI is once again rising faster than expected, according to the WSJ’s “consensus estimate.”

A special word about the PPI for Personal Consumption Goods (finished consumer goods), something consumers might want to keep an eye on: it spiked 1.7% from October and is now up 5.3% year over year. 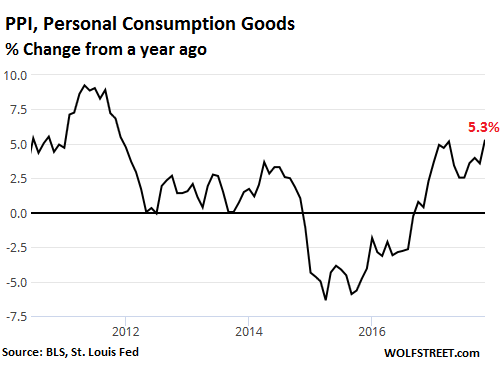 The changes of prices that producers receive for their goods and services don’t always convert in lockstep to changes in prices that consumers pay. But they precede them and form the basis for them. In terms of consumer prices, the PPI points at inflation pressures beneath the surface. Consumer price inflation, as measured by the Consumer Price Index, lags the price pressures seen further up the pipeline [update, Dec 13: CPI rose 2.2% in November].

At this point, these pressures are not a sign of some kind of run-away inflation. But they’re a sign among many others that inflation is ticking up, that pressures are building further up in the pipeline, and that some temporary factors that had eased inflation down a smidgen have started to fade.

The Fed looks at all kinds of data for its rate decision, glimpses of which can be seen in the minutes. Its primary inflation measure is the core PCE price index, but like the CPI, it too is subject to price pressures building up in the pipeline, which is what the PPI shows. In other words, there is nothing in this report to discourage the Fed from continuing, as it likes to say, to “gradually” remove “accommodation” from the financial markets.

Other inflation measures too show something is moving beneath the surface. Read… New York Fed: “Underlying Inflation” Hits 11-Year High

35 comments for “Fed Gets More Ammo for Rate Hikes”