Even Seattle rents are under pressure from new construction. But rents are surging in mid-tier markets.

Over the past few years, commercial real estate prices have boomed, and so has multi-family construction, enticed by dropping and desperately low rental vacancy rates that have pushed up rents. But vacancy rates bottomed out in Q2 2016 and have since turned up. In Q3 2017, the rental vacancy rate rose to 7.5%, the Census Bureau reported on Tuesday. While still low, it’s the highest rate in over three years: 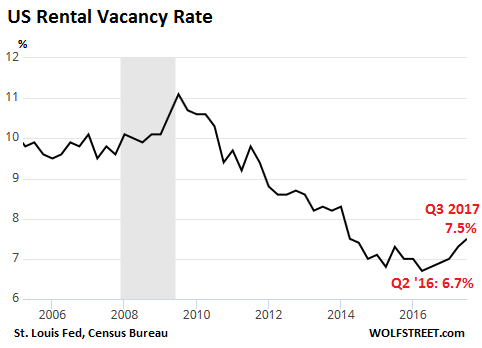 Rents have started to respond in the most expensive rental markets.

These are asking rents in multifamily apartment buildings, that Zumper aggregated in its National Rent Report. Single-family houses or condos for rent are not included. And these asking rents do not consider incentives, such as “one month free” or “two months free,” which effectively slash the rent for the first year by another 8% or 17%. The data is based on “over one million active listings,” Zumper explains in its methodology. Importantly, the data also includes asking rents from new construction.

So this is not what renters are currently paying, which in many cities includes rent-controlled units. Rather, it’s a measure of the open market, including new construction units.

After this plunge, New York’s one-bedroom rents are in second place and two-bedroom rents in fourth place behind San Francisco, Los Angeles, and Washington DC – which also says a lot about how expensive DC and LA have become.

In Chicago, the median asking rent for a one-bedroom apartment dropped 15.9% year-over-year to $1,530, and 15.6% to $2,110 for a two-bedroom. Whatever the reasons – from Chicago’s declining population to its fiscal woes – median asking rents have plunged by 25% and 20% respectively from their peaks in late 2015.

Even in Seattle, asking rents are coming under serious pressure, possibly due to new construction units piling on the market as years of crane-counting are producing results. The median asking rent for one-bedroom apartments dropped 1.1% year-over-year and is down 7.7% from the peak in August. Part of the sharp decline since the summer may be due to seasonal patterns. Rents for two-bedrooms still rose 3.7% year-over-year but are down 5.7% from their peak in April! 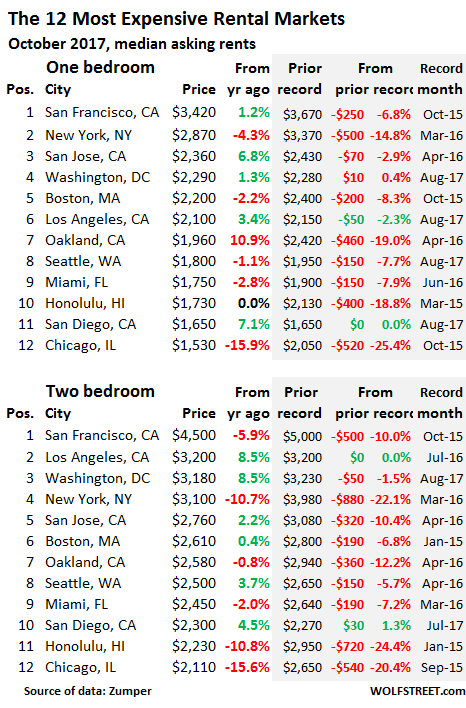 A word about the other double-digit losers among the top 12:

But there’s a boom in “mid-tier” rental markets.

In many “mid-tier” markets – “mid-tier” in terms of the magnitude of the rent – asking rents are soaring. Here are some of the mid-tier markets with double-digit year-over-year rent increases (one-bedroom and two-bedroom apartments):

Whiplash from the drama on the ground?

With rents plunging in some markets but rising or surging in many others, the picture of this vast nation shows that rents are still rising overall.

This is confirmed by recent inflation figures. In September, the Consumer Price Index for “rent of primary residence” increased by 3.8% year-over-year. And according to Zumper’s national rent index, the median asking rent for a one-bedroom rose 4.1% year-over-year and for a two-bedroom 3.8%. These overall rent increases will continue to feed inflation. It’s just that in the most expensive markets in the US, rents have hit a ceiling and have bounced off this ceiling. And some of this is now spreading to other markets.

Here’s some extraordinary home price inflation in all its beauty. Read…  The US Cities with the Biggest Housing Bubbles

Below is Zumper’s list of the top 100 most expensive rental markets and price movements. Check out your city (click to enlarge). 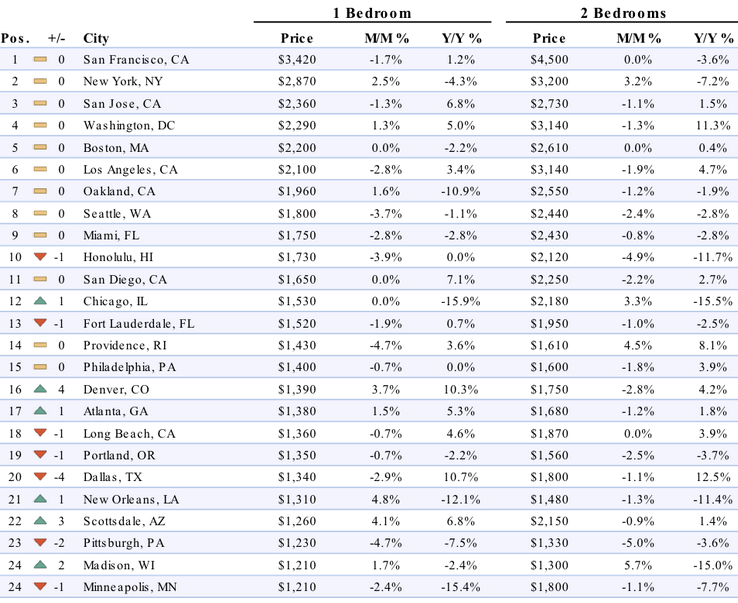 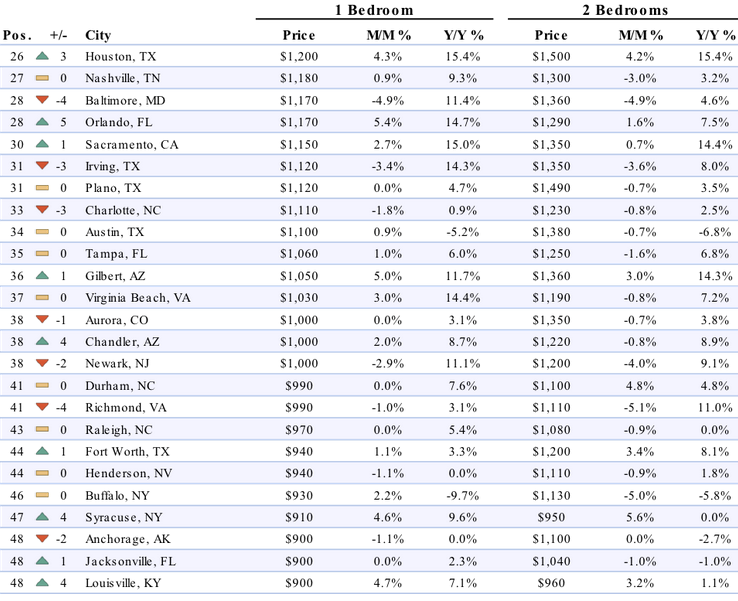 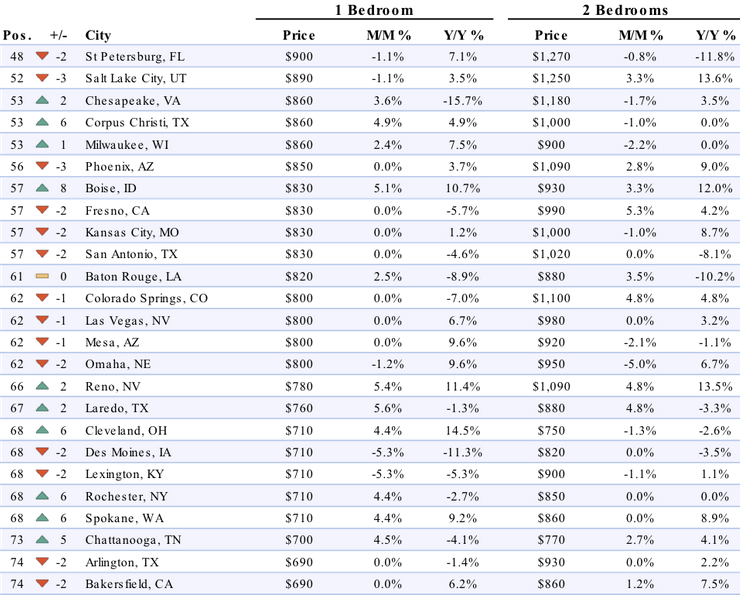 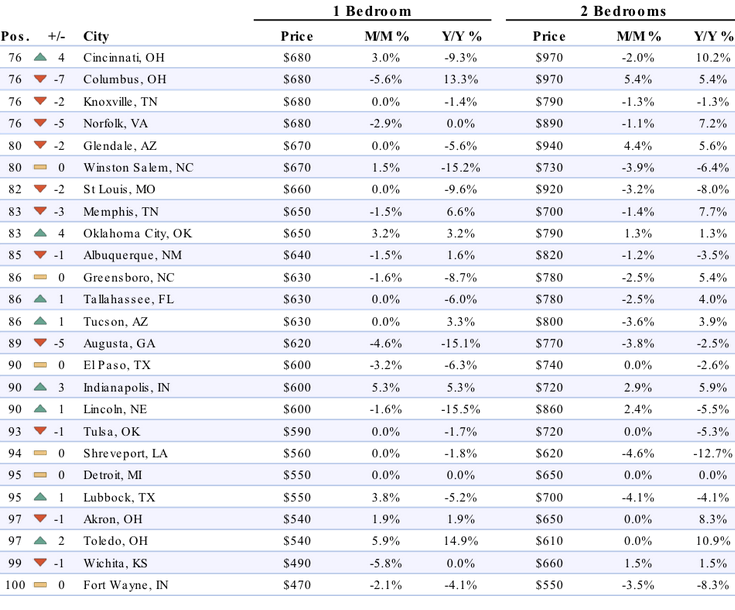 42 comments for “It Gets Serious: Biggest US Cities Where Rents Are Plunging”