Sales volume in Q3 plunges 67% from a year ago.

Manhattan, the biggest most expensive trophy market in the US for commercial real estate, used to be particularly appealing to exuberant foreign investors, such as Chinese conglomerates. But in the third quarter, sales volume of large office properties (minimum $5 million and 50,000 sq. ft.) plunged 67% year-over-year to $991 million, the lowest in five years. It was down 90% from the peak in Q1 2015.

“Q3 2017 might signal a return to normalcy for the highly sought-after Manhattan market,” the report by Yardi Systems’ Commercial Café commented.

This chart shows the dollar sales volume of large office properties. The $991 million in Q3 is rounded up to $1 billion: 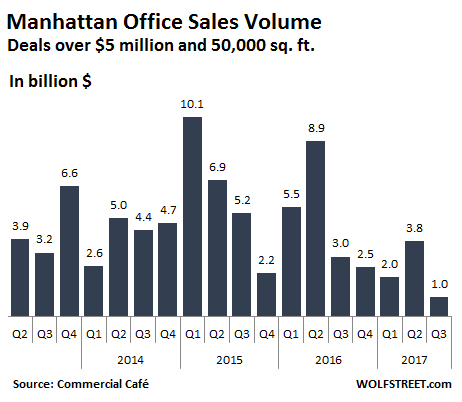 The number of closed deals plunged 40% to just six transactions, according to Commercial Café. That’d down 71% from the peak in Q1 2015: 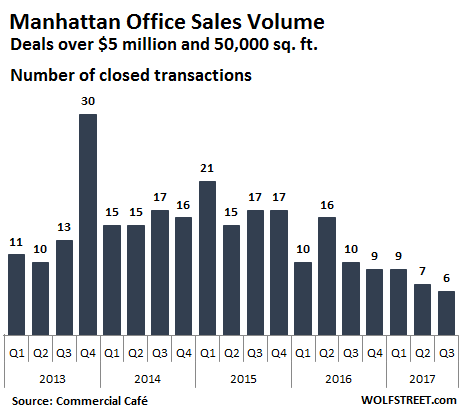 As this chart shows, the average price per square foot varies based on a number of factors, including seasonality, but with a trend since the peak in Q1 2016 that doesn’t look promising: 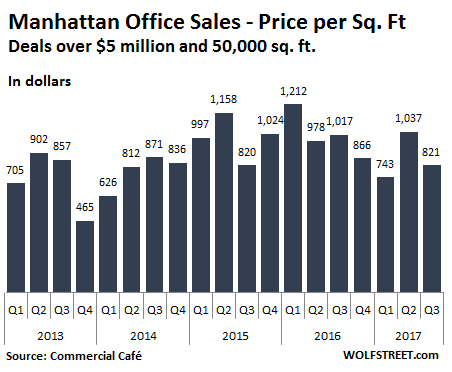 What’s sorely missing? The big transactions at inflated prices by Chinese buyers, such as the $2.2 billion purchase in May of 245 Park Avenue by the Chinese conglomerate HNA Group that had boosted Q2 sales. The deal was more than twice the size of the six transactions in Q3 combined. At $1,282 per square foot, it was also “among the highest price-per-pound for this type of asset” ever recorded in Manhattan, as it has been described. Those trophy purchases by Chinese conglomerates really moved the needle.

But now the large Chinese conglomerates that had considered the Manhattan office market their trophy hunting grounds were absent.

This absence follows the crackdown by China’s State Council on cross-border transactions. Its guidelines spell out what Chinese companies can and cannot acquire overseas to “promote healthy growth of overseas investment and prevent risks,” as the guidelines said.

Some transactions are still desirable according to the guidelines, with a big emphasis on China’s “Belt and Road Initiative” in Central Asia and on companies that “take the lead to export China’s superior technology and equipment, upgrade the nation’s research and manufacturing ability, and make up the shortage of energy and resources through prudent cooperation in oil, gas and other resources.”

Other overseas investments will be “restricted,” including “real estate,” “hotels,” and “entertainment.”

So here we go. Over the past few years, and building up into a powerful crescendo that culminated just a few months ago, Chinese conglomerates have been buying up whatever they could get their hands on with precariously borrowed money. But now they’re being reined in by Chinese authorities who are worried about the soaring debt levels of those conglomerates and about their acquisitions at inflated prices and about a financial crisis that these debt levels could trigger when they go bad. And trophy markets, such as Manhattan, are among the first to feel the effects.

US Treasury securities with maturities of two years or less have taken a beating, and their yields have been soaring, but the yield spread has collapsed to the lowest level since early in the Financial Crisis, and even the Fed is worried. Read… US Treasury Rates Hit Nine-Year Highs