Tech, including Facebook and Google, lent their support to a host of misleading scare tactics.

Wolf here: After the US Congress repealed restrictions earlier this year, your broadband provider (ISPs such as Comcast, Verizon, or AT&T) can monetize your private data. ISPs know practically everything you do on the internet, and they know who you are and have your credit data from credit bureaus such as Equifax. California tried to pass legislation that would have reinstated some of those protections. So this is not just about a legislative defeat of internet privacy in California, but about how lobbyists for the tech industry in general operate.

As this succeeded in California — via falsehoods and national security scaremongering — the campaign is now heading to other state legislatures because the industry wants to monetize all your data in a world where you and your data are the product.

Across the country, state lawmakers are fighting to restore the Internet privacy rights of their constituents that Congress and the President misguidedly repealed earlier this year. The facts and public opinion are on their side, but the recent battle to pass California’s broadband privacy bill, A.B. 375, suggests that they will face a massive misinformation campaign launched by the telecom lobby and, sadly, joined by major tech companies.

The tech industry lent their support to a host of misleading scare tactics.

Big Telco’s opposition was hardly surprising. It was, after all, their lobbying efforts in Washington D.C. that repealed the privacy obligations they had to their customers. But it’s disappointing that after mostly staying out of the debate, Google and Facebook joined in opposing the restoration of broadband privacy for Californians despite the bill doing nothing about their core business models (the bill was explicitly about restoring ISP privacy rules). Through their proxy the Internet Association, which also represents companies like Airbnb, Amazon, Etsy, Expedia, LinkedIn, Netflix, Twitter, Yelp, and Zynga, among others—Google and Facebook locked arms with AT&T, Verizon, and Comcast to oppose this critical legislation.  What is worse, they didn’t just oppose the bill, but lent their support to a host of misleading scare tactics.

How do we know? Because we were on the ground in Sacramento in September to witness every last-minute dirty trick to stop A.B. 375 from moving forward. But there is one positive outcome: ISP and Silicon Valley lobbyists have played their hand. When these tactics are deployed at the last minute by an army of lobbyists, false information is extremely hard to counter by citizens and consumer groups who lack special access to legislators. But over time legislators (and their constituents) learn the truth – and we’ll make sure they will remember it when this legislation comes back around in 2018.

People have not forgotten they had privacy rights that were repealed this year. It is in fact one of the most unpopular moves by this Congress and opposed by voters regardless of political party affiliation. Undoubtedly, the companies and their proxies will recycle what worked in California to other states as legislatures move closer to passing their own bills. To inoculate against misinformation, here is a breakdown of the three most pervasive myths we saw at the final hours.

Let’s not let our lawmakers get fooled again.

Read the Bill: the Definitions Are Rooted in Longstanding Telecom Law

Lobbyists often calculate that some lawmakers are not going to closely read a bill and that these policymakers will instead rely on the word of “industry experts” without checking their claims.

In California, the opposition lobby used this tactic and began claiming that the definition of “Broadband Internet Access Service” (the technical term for an ISP that sells broadband service) was inadequately defined and could burden all kinds of companies that are not ISPs. Technology giants like Google and Facebook, using the Internet Association as their proxy, echoed the false claim, providing the air of legitimacy that added to the intended confusion.

In reality, there was nothing vague or unclear about this definition in A.B. 375. The language in the California bill was copied almost verbatim from the long-standing definition under Federal Communications Commission rules.

You can see for yourself in this side-by-side comparison. 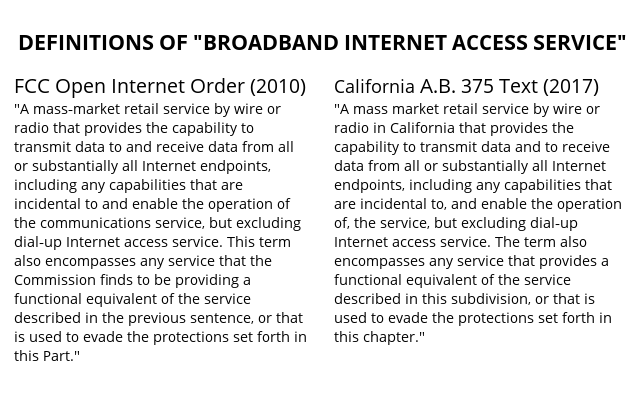 And the bill’s author, Assemblymember Ed Chau, went one step further to explicitly state which entities would not be covered by the bill:

“Broadband Internet access service provider” does not include a premises operator, including a coffee shop, bookstore, airline, private end-user network, or other business that acquires BIAS from a BIAS provider to enable patrons to access the Internet from its respective establishment.

The language couldn’t be clearer. But repeat a false claim enough times from enough paid lobbyists and legislators start to question themselves.

One of the most offensive aspects of the misinformation campaign was the claim that pretending to restore our privacy rights, which have been on the books for communications providers for years, would help extremism.

Here is the excerpt from an anonymous and fact-free document the industry put directly into the hands of state senators to stall the bill:

The bill would bar ISPs from sharing potentially identifiable information with law enforcement in many circumstances. For example, a threat to conduct a terror attack could not be shared (unless it was to protect the ISP, its users, or other ISPs from fraudulent, abusive, or unlawful use of the ISP’s service). AND the bill instructs that all such exceptions are to be construed narrowly.

In addition to national security scaremongering, the industry put out a second document that attempted to play off fears emerging from the recent Charlottesville attack by white supremacists:

This would mean that ISPs who inadvertently learned of a rightwing extremist or other violent threat to the public at large could not share that information with law enforcement without customer approval. Even IP address of bad actor [sic] could not be shared.

There is absolutely nothing true about this statement. A.B. 375 specifically said that an ISP can disclose information without customer approval for any “fraudulent, abusive, or unlawful use of the service.” More importantly, it also included what is often referred to as a “catchall provision” by allowing ISPs to disclose information “as otherwise required or authorized by law.”

The catchall provision is key, since there are already laws on the books allowing services to provide information to the police in emergency situations. For example, the Stored Communications Act spells out the rules under which ISPs are, and are not, allowed to disclose content to law enforcement. The California Electronic Communications Privacy Act (CalECPA), passed in 2015, allows ISPs to disclose information to law enforcement as long as it doesn’t run afoul of state or federal law and allows law enforcement to obtain this information without a warrant in specific emergency situations. Facebook and Google presumably know this, because they supported CalECPA when it was in the legislature. Comcast, AT&T, and Verizon know it too.

In materials like this advertisement, the opposition lobby claimed that A.B. 375 would result in a deluge of pop-ups that consumers would have to click through, and that in turn this inundation would create a sort of privacy fatigue. Consumers would stop caring, and cybersecurity would suffer.

We’ve debunked most of this tale in a separate post , but let’s address the issue of pop-ups. The bill did require ISPs get your permission (also known as opt-in consent) before monetizing your information that includes the following:

(7) (A) Internet Web site browsing history, application usage history, and the functional equivalents of either.

But it did not mandate that people have to constantly receive pop ups to obtain that consent. In fact, once you said no, they couldn’t keep asking you over and over again without violating this law and likely laws that regulate fraud and deceptive acts by businesses. However, if the ISP changed the terms of your agreement, they would have to ask your permission again.

Think of it like renting an apartment. If your landlord was going to change your lease agreement, you’d want to know and you’d want to make sure you agreed to any amendments. Being notified of these changes isn’t annoying, it is expected. The only thing that would be annoying is if your landlord kept pestering you to agree to changes you don’t want and did not take no for an answer.

The same applies to ISPs: people are a lot more concerned about ISPs trying to sneak through new invasions of privacy than the alerts they get about those changes.

It’s easy to see how lawmakers could be duped in the sleepless, high-speed, waning hours of the legislative session, especially when the information comes from sources that have historically been credible.

In 2018, we plan to make sure that every legislator who was bamboozled by companies like Google, Facebook, Comcast, and AT&T is given the facts. We are confident that lawmakers in states around the nation will continue to push for consumer privacy, filling the gaps created by the Federal Communications Commission as it rolls back network neutrality and privacy protections and AT&T’s efforts in the courts to eliminate the Federal Trade Commission’s authority to oversee telephone companies.

EFF will continue to support state efforts to respond, including dispelling the myths spread by privacy opponents. And we’ll need your help to make sure our legislatures respond to the demands of a vast majority of the public and side with Internet users—not the companies that seek to exploit them. By Ernesto Falcon, Electronic Frontier Foundation.

What else has Equifax not disclosed yet? Read… LEAKED: Worst Data Hack in US History Gets Worse