Or Why Consumer Spending Has Been Dragging for Years.

One more thing about the new Census Bureau’s Income and Poverty report for 2016, which found to the great excitement in the media that median household income, adjusted for inflation (via CPI), rose 3.2% in 2016 to $59,039 – finally a tad above where it had been 17 years ago.

We already found buried in it that inflation-adjusted earnings from wages, salaries, etc. for full-time employed men have fallen 4.4% since 1973.

So now, we’ll look at another data set buried in the Census Bureau’s report, which is based on respondents at 98,000 addresses across the US. We want to know which households were the lucky ones – and turns out, there weren’t very many.

“Earnings” in this report are the fruits of labor – so wages, salaries, and the like. “Household income” includes not only “earnings” but also money from other sources during the year. These are the sources of “household income” in the report:

This is critical when looking at the income distribution as to which households had the most income because proceeds from investment (#10, 11, 12, and 13 in the list above) play a big role in households with large investments. 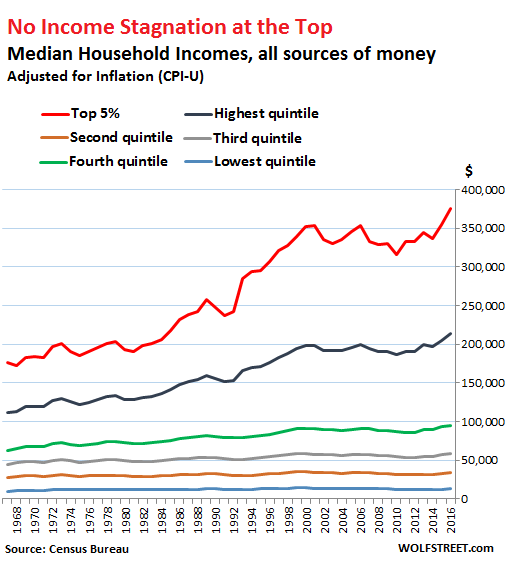 Households in the third lowest quintile (40% to 60% on the income scale, purple line) have now finally squeaked past their prior income peak in 2000, but by less than 0.5%.

Also note how household income in this top 5% category fell sharply during the Financial Crisis, and how the Fed’s monetary policies, designed to create what Bernanke called the “Wealth Effect,” effectively created wealth and income for them, benefiting the most those households with the most assets. Hence, incomes from their investments began to surge in 2010. For them, the Fed, personified by Bernanke, was the guardian angel — while the middle class was getting further hollowed out, with the bottom 60% getting shafted.

Thankfully, the Census Bureau did not provide data on the top 1% or the top 0.1%. It would have made that chart look absurd.

And on second thought, for an economy based on consumer spending, strangling the incomes of 80% of those very consumers on whom the economy relies for growth, while bailing out and enriching a tiny group at the top, doesn’t quite appear to be an effective economic model over the longer term.

Buried in the annual income data from the Census Bureau are some facts that the media silenced to death. Men, sit down. Read… The Terrible Facts about Real Earnings of Men