Breath-taking differences in a vast country.

The Census Bureau released another data trove today for 2016, based on the American Community Survey. Among many other data points, the survey details median household incomes by geographic location, such as by metro area, county, or state. And they show just how enormous the income differences in the US are from city to city.

These MSAs can be large. For example, the extended San Francisco Bay Area is divided in several metros including the two biggest:

“Household income” is income by all household members and from all sources of money, including “earnings” (wages, salaries, and the like) and investment income such as interest, dividends, and rents (#11-#13):

Below are the 30 metros in the US with the highest household incomes. Those in California are color-coded: bright red for the extended Bay Area, burgundy (sort of) for Southern California, and neon-pink for the Central Coast.

In total, nine of the 30 metros with the highest median incomes are in California. There are many up and down the East Coast and a number of them in the middle of the country. Hawaii has two metros on the list, as has Alaska. But even within the top 30, the median household income of Number One is 57% higher than that of Number 30: 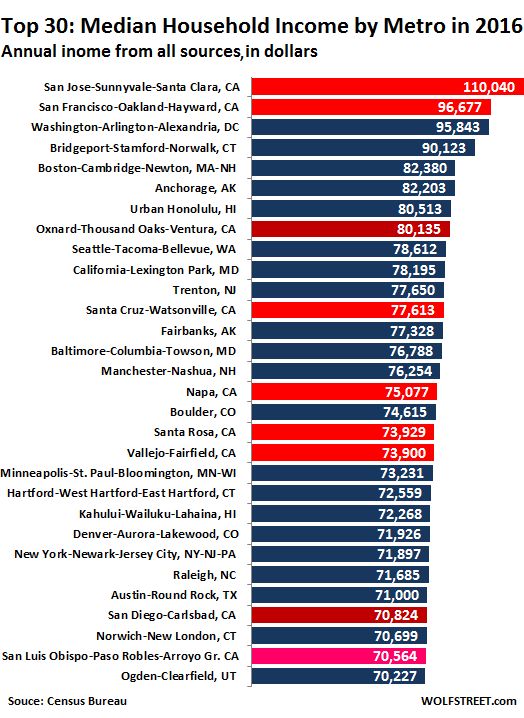 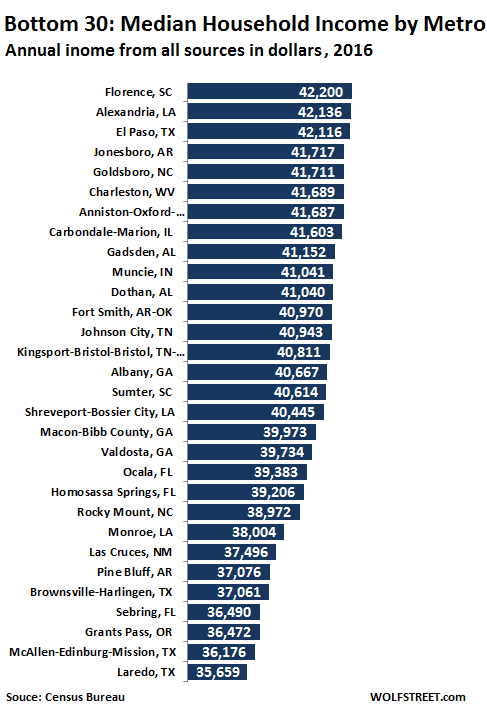 The comparison shows just how vast the income differences by geographical regions are in a vast country, and it also explains a host of other differences, such as home prices and rents, where $1.2 million, for example, buys a median condo in San Francisco (these are nothing special) or a palatial house in Laredo, TX.

But “median household income” is an aggregate number that hides as much as it reveals. Here are some details. Read…  The Chilling Fact “Record Median Household Income” is Hiding