During the windiest parts of the day, wind power typically supplies 20% of the power in Texas, according to grid operator Electric Reliability Council of Texas. Most of the wind farms are in West Texas, far away from the coast. During the hurricane, they continued operating normally. But a little over 2,000 MW of capacity is located in coastal areas, in hurricane country. So how did they fare?

According to a report by the Southern Alliance for Clean Energy (SACE):

Between 3-4 PM, as conditions deteriorated, wind power production dropped by approximately 800 megawatts, with a regional operation rate of about 47%.

This chart by SACE shows power generation for each of the four days, starting with August 25 (red line): 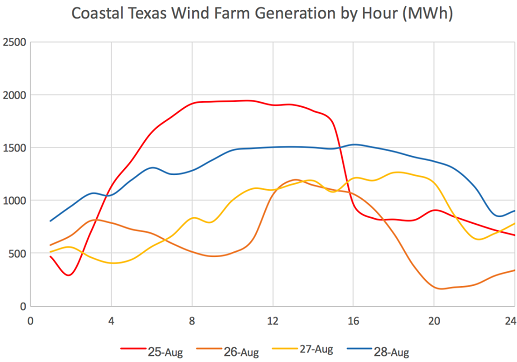 Only one facility – E.ON’s Papalote Creek Wind Farm complex, south of where the hurricane made landfall near Corpus Christi and then moved north – was knocked out of operation, according to Recharge, not because of damage to the wind turbines but because the electric transmission system to the facility was heavily damaged by the storm, and service to the grid was cut.

The 380 MW project experienced sustained winds of 90 mph with gusts over 100 mph, before losing its power connection. Recharge:

“The park was placed into an Owner’s stop and has remained down since the storm, since the underlying grid suffered extensive damage and power was lost to the facility,” E. ON says in a statement.

The turbines “appear to be in good shape,” E.ON said. “Once power is restored to the substation, our team will begin working to energize the turbines, once they have been determined acceptable to return to service.”

Another facility E.ON owns near the Gulf Coast is the 200 MW Magic Valley wind farm in Willacy County, toward the border with Mexico. Normal operations have resumed.

Duke Energy Renewables’ 402 MW Los Vientos I and II wind farms in Willacy County have not seen “any impact” and continue to operate normally.

Avangrid Renewables’ Penascal I & II projects (404 MW) and Baffin wind farm (201 MW) in Kenedy County were already back into partial operation on Saturday and to near full capacity on Monday.

But there are other problems – the same problems that everyone is having in the devastated areas: An Avangrid spokesman told Recharge: “We still have a significant number of personnel who need to remain evacuated with their families due to area flooding…”

Pattern Energy Group Inc.’s 283 MW Gulf Wind facility on the Gulf Coast in Kenedy County, about 85 miles south from where the storm made landfall remained in operation.

“We were on the clean side of the storm,” John Martinez, Pattern’s director of operations, told Bloomberg. “The dirty side is the side coming right off the water.”

At winds above 55 mph, the turbines must be shut down. Gusts at the turbines reached up to 50 mph. So the turbines continued operating at sustained maximum production for much of the first 36 hours of the storm, Martinez said. Maximum power production usually occurs at wind speeds between 26 and 30 mph. Collecting a small part of the power of a hurricane.

Given the mayhem and devastation in the area, it’s good to see that one of the sectors that many people thought at risk survived largely unscathed.

How will Hurricane Harvey impact nationwide auto sales? My thoughts. Read…  What will Harvey do to “Carmageddon?”

65 comments for “What Did Harvey Do to the Wind Farms on the Texas Coast?”