In Chicago, rents are getting crushed.

Since 2012, nearly 26,000 multifamily rental units have been completed in the city, according to Fannie Mae, which for 2017 sees “elevated volume of new supply, particularly in the Loop/River North/Gold Coast submarkets.” This does not include condos and single-family homes that were bought by investors and have reappeared on the rental market. Over the same five-year period, Chicago’s population has dropped by 9,000 people.

This has some effects on rents.

These are asking rents in multifamily apartment buildings. Single-family houses or condos for rent are not included. And they do not include incentives, such as “one month free” or “two months free,” which effectively slash the rent for the first year by another 8% or 17%.

In January this year, Chicago was still in 8th place on the list of the 12 most expensive major rental markets. It has since been pushed down relentlessly – though other markets too have declined. And in August, Chicago was effectively pushed off the list into 13th place (so now my list of the top 12 has 13 entries).

This offers some relief for renters – though Chicago remains immensely expensive. But it’s not such a great thing for landlords whose costs are rising due to various fees and taxes the City has recently imposed to avoid falling into its fiscal sinkhole.

Other high-dollar luminaries where rents fell.

The last period of year-over-year declines in San Francisco ended in April 2010 after the Financial Crisis. This time, there is only a “Housing Crisis,” where the middle class can no longer afford to move into a modest apartment.

Given that plunge, New York City’s median asking rent for a two-bedroom has dropped below Washington DC to an ignominious third/fourth place, shared with Los Angeles, which also tells you how expensive DC and LA are becoming.

This table of the 12, well 13 now, most expensive major rental markets in the US shows median asking rents, their year-over-year changes, and (in the shaded areas) the prior record and the change since then: 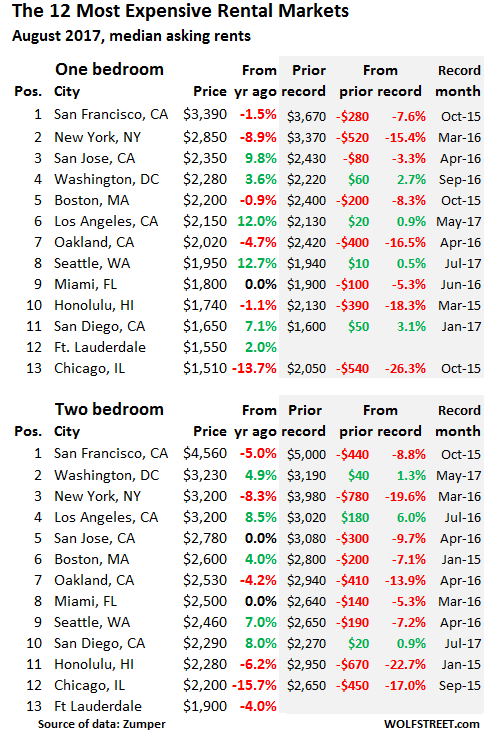 The other double-digit losers were:

But nationwide, asking rents for both one and two-bedroom apartments were up 3.2% year-over-year, according to Zumper. How can this be, given the kind of red ink in the top 13 markets?

The boom in “mid-tier” rental markets.

Asking rents are soaring in the high single digits and even in the double digits in many “mid-tier” markets – “mid-tier” in terms of the magnitude of the rent. Here are some of the mid-tier markets with double-digit year-over-year rent increases (one-bedroom and two-bedroom apartments):

Note the three cities in North Texas (Dallas, Irving, Fort Worth) on the list. Plano, north of Dallas, didn’t quite make the double-digit list with rent increases of 7.5% and 10.7% year-over-year. The North Texas housing market is hopping.

Below is Zumper’s list of the top 100 most expensive rental markets and price movements. Check out your city (click on table to enlarge).

In terms of homebuyers? Read…  The US Cities with the Biggest Housing Bubbles 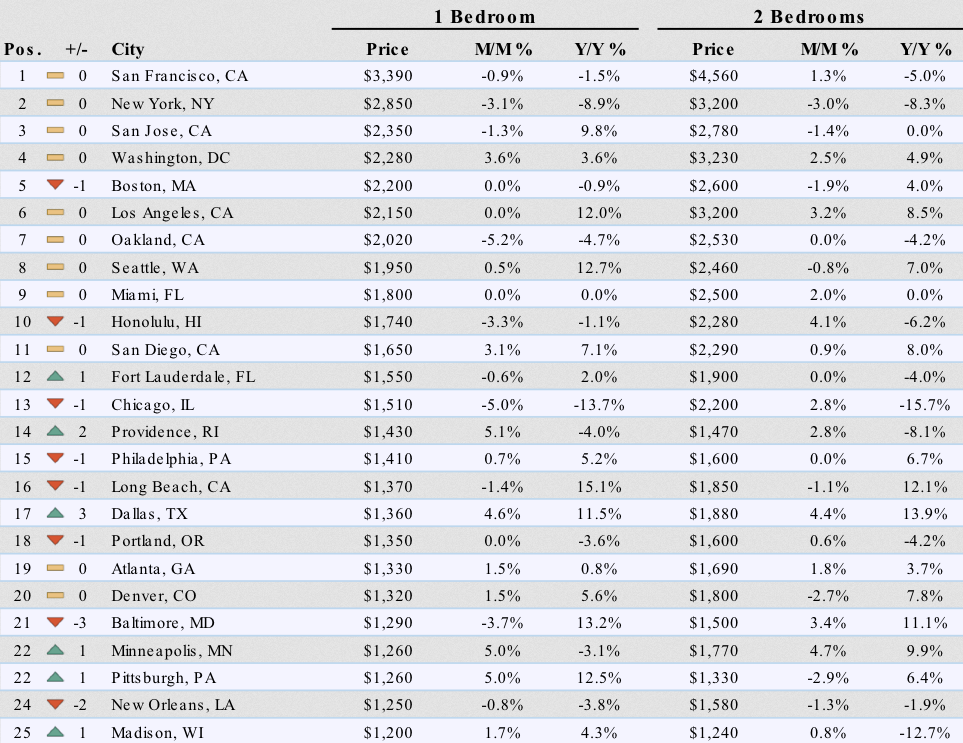 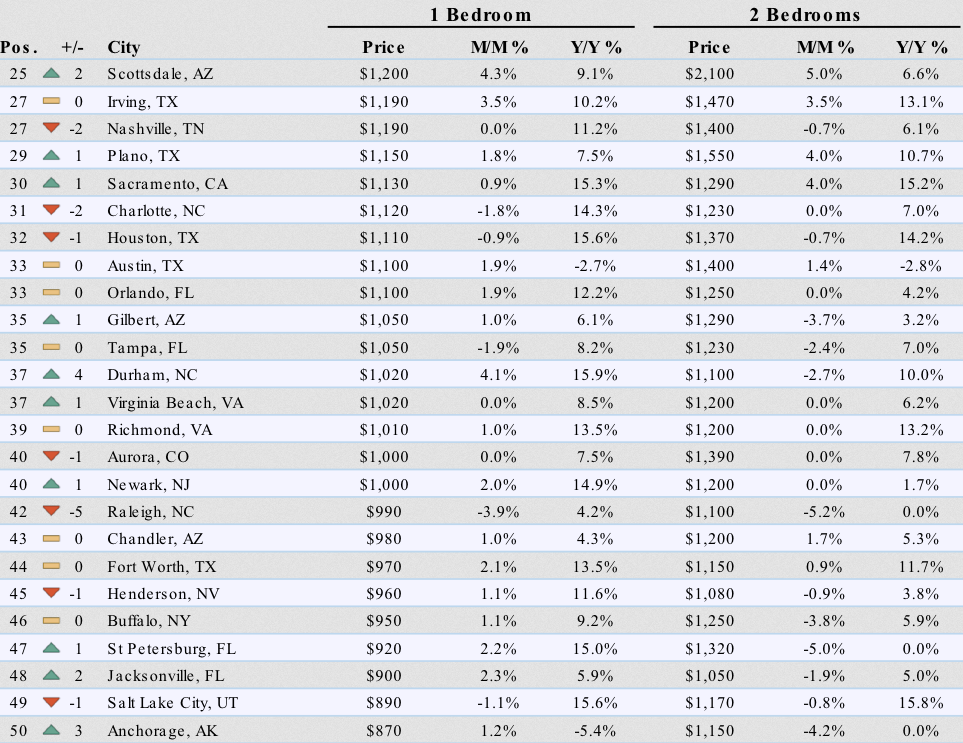 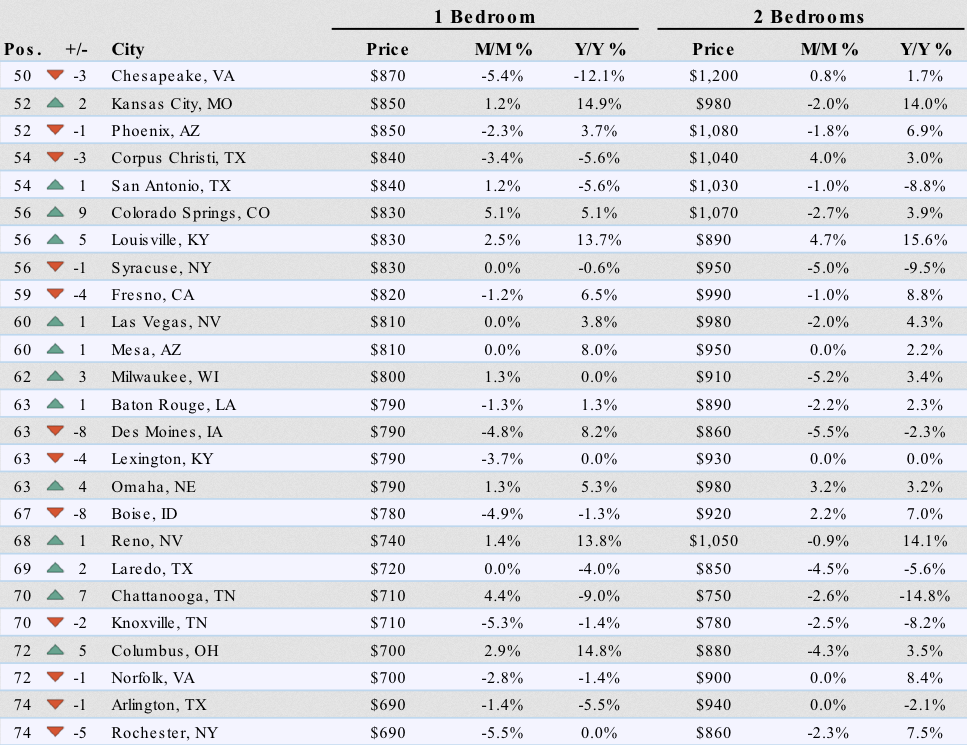 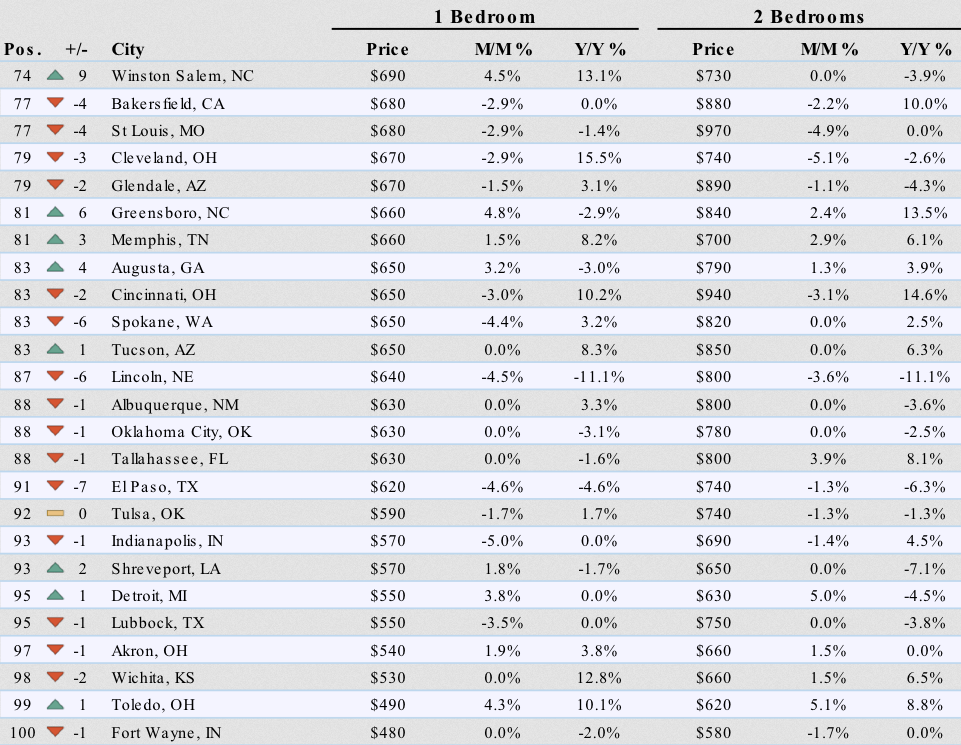 80 comments for “The Biggest US Cities where Rents Are Plunging”