All big gorillas have been trying, but consumers just don’t want to.

Numerous companies have been trying. Safeway started an online store and delivery service during the dotcom bubble and has made practically no headway. A plethora of startups, brick-and-mortar retailers, and online retailers have tried it, including the biggest gorillas of all — Walmart, Amazon, and Google. Google is trying it in conjunction with Costco and others. It just isn’t catching on.

And this has baffled many smart minds. Online sales in other products are skyrocketing and wiping out the businesses of brick-and-mortar retailers along the way. But groceries?

That’s one of the reasons Amazon is eager to shell out $14.7 billion to buy Whole Foods, its biggest acquisition ever, dwarfing its prior biggest acquisition, Zappos, an online shoe seller, for $850 million. Amazon cannot figure out either how to sell groceries online though it has tried for years. Now it’s looking for a new model — namely the old model in revised form?

This is why everyone who’s online wants to get a piece of the grocery pie: The pie is big. Monthly sales at grocery stores in June seasonally adjusted were $53 billion. For the year 2016, sales amounted to $625 billion: 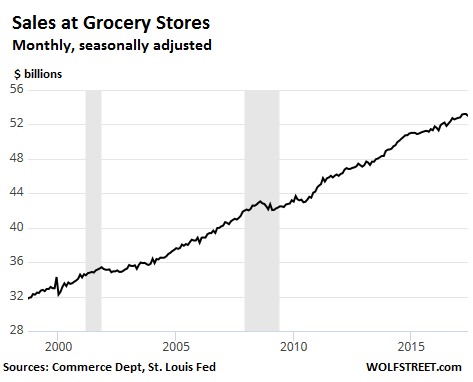 But it’s going to be very tough for online retailers to muscle into this brick-and-mortar space, according to Gallup, based on its annual Consumption Habits survey, conducted in July. Consumers just aren’t doing it:

At this point, online grocery shopping appears to be an adjunct to retail shopping rather than a replacement, as most shoppers whose families purchase groceries online once or twice a month or more say they still visit a store to buy groceries at least once a week.

But there are some differences by age group – and maybe that’s where Amazon sees some distant hope:

But all age groups shop between 97% and 99% at brick-and-mortar grocery stores at least once a month.

Online shopping became a big thing over 20 years ago. It is in the process of wiping out the brick-and-mortar ends of department stores, specialty apparel retailers, electronics stores, and many others. If these companies don’t have a vibrant presence online, they’ll be gone. Even shoe sales. Pundits said shoe sales would never migrate online because people would want to try their shoes before buying them. Yet, they’re migrating online — and Payless ShoeSource ended up in bankruptcy court.

Some non-food items consumers buy at supermarkets — toilet paper, diapers, detergent, shampoo, and the like – are already migrating to online stores. This is one of the reasons supermarkets are hurting. But it hasn’t happened with groceries yet.

The failure of online grocery sales has been a two-decade nightmare for the online gorillas. They’ve succeeded in everything else except grocery sales despite the money they’ve thrown at it and despite the different schemes they’ve concocted.

Amazon’s purchase of Whole Foods seems to be an effort to look at this whole problem in a new way and come up with something that might actually get consumers to shift at least part of their grocery sales online. And maybe someday, Amazon (and others) will succeed in making a dent. But that day, based on how consumers responded in the Gallup survey, appears to be a long way off.

Nearly every retail chain caught up in the brick & mortar meltdown has been acquired in a leveraged buyout by a private equity firm. Now these LBO queens are heading into bankruptcy court. But PE firms win again. And stiffed creditors not amused. Read…  Brick & Mortar Retail Meltdown Fueled by Asset Stripping. Details Emerge in Bankruptcy Courts

129 comments for “Amazon Online Grocery Boom? Not So Fast…”