Before the Elections and despite Bank of Mexico’s “monetary shock.”

Inflation is a touchy topic in Mexico where wages are tight and not growing fast enough. Inflation is spiking. And consumers, trying stretch ever further just to keep up, are not happy.

Consumer prices, as measured by the national consumer price index, soared 6.44% in July compared to a year ago, according to Mexico’s statistics agency INEGI. It was the sharpest annual inflation rate increase since December 2008, sharper than economists had forecast. It has now accelerated for the thirteenth month in a row. And it’s very much unwanted by regular Mexicans: 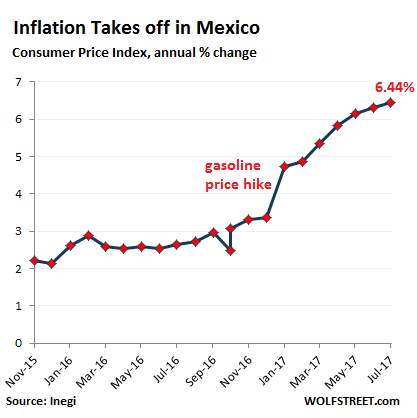 The spike in inflation at the beginning of the year was to some extent due to a jump in gasoline prices brought on by deregulation of the gasoline market on January 1. At the time, some politicians in the opposition Democratic Revolution Party called on Mexicans to stage a “peaceful revolution” against the price increases. It triggered a series of protests, and road blockages snarled traffic for days. But those gasoline prices didn’t come back down. On the contrary.

Fuel prices had been set by the government. Those prices were heavily subsidized. This was possible since the government owned the state oil company, Pemex, which has been embroiled in a slew of corruption scandals, and which got hit hard by the collapse in oil prices.

So Mexicans experienced something peculiar: While gasoline prices in the US and many other countries had plunged and remained low as a result of the oil bust, Mexicans experienced a similar plunge as result of the oil bust and then a sudden and powerful surge that started at the beginning of the year. Even as the price of crude oil fell 9% (WTI) over the past seven months, gasoline prices in Mexico surged 32% (via Trading Economics): 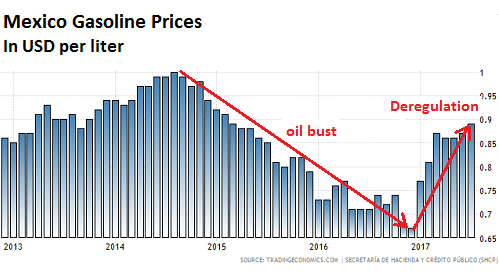 The fuel-price surge was expected to calm down by now, but it hasn’t quite yet. And in July, food added to the ticket: prices of fruits and vegetables soared 22% year-over-year.

The whole thing was an unpleasant surprise for the government, which had been pronouncing the end of the surge in inflation – prematurely each time. Presidential elections are coming up next year, and this surge in inflation is very inconvenient.

Finance Minister Jose Antonio Meade, when he was trying to explain the phenomenon to reporters in Mexico City, said that this time, it was the fault of tomatoes.

Excluding the surge in tomato prices, the inflation index would have been 30 basis points lower, he said. So around 6.1%. That would still be more than double the rate of inflation a year ago! Even without those dang tomatoes.

And it gets more complicated for the government. The core inflation rate – without some volatile food and energy prices – surged nearly 5% year-over-year. Just blaming tomatoes and gasoline doesn’t quite explain the story. But as always, there’s hope that this will go away, and not turn into something like the inflation debacle in Argentina.

“In general terms, we still think that the inflation trajectory will be decreasing,” he said. This has been the song and dance for a while.

And there’s more: This surge in inflation occurred despite the breath-taking recovery of the beaten-down peso. The peso had fallen to a record low of 22 pesos to the dollar on January 19, thus making imports more expensive, which would have explained part of the inflation spike early in the year. But since then, the peso has skyrocketed. It’s up 22% against the dollar in seven months. At 17.9 pesos to the dollar currently, it’s back where it had been in May 2016. And thus the peso should have disappeared as a factor in year-over-year inflation.

The hope is that the surge of the peso is going curtail inflation, Finance Minister Meade told reporters – there being a lot of hopes involved these days in economic policy.

There’s an even bigger hope: that the surge of the peso is going to last, which, given the peso’s long history of just relentlessly zigzagging lower in fits and starts against the dollar, is not exactly a sure bet.

To counteract these inflation pressures and to prop up the peso, the Bank of Mexico jacked up its policy rate from 3.0% at the end of 2016 to 7.0% now. A real “monetary shock.” The central bank will release its next interest rate decision on Thursday. It is widely expected to maintain it at 7.0%. Which is a stunningly high rate in this world of near-zero or below-zero policy rates. But when inflation takes off, that’s the kind of bitter medicine to be expected.

41 comments for “Inflation Spikes Most since 2008 in Mexico. Bad Timing”