It depends on the value of the home.

What happens to home prices during the current housing boom and the next housing bust depends to some degree on whether the home is relatively “affordable” — whatever that means at today’s prices — or more expensive.

This is an important data point in the consideration for lenders that have to worry about their collateral value and for residential property investors and for homeowners who might want to get a foretaste of what is next.

The CoreLogic Case-Shiller Home Price Index offers an index based on three tiers of prices — low tier, middle tier, and high tier. Like small-cap stocks versus large-cap stocks, the less expensive homes show much more price movements up and down and are thus far more volatile during booms and busts than their more expensive counterparts.

Prices in the low tier rose 10.8% year-over-year, according to the TPI, published in August. For mid-tier homes, the index rose 7.5%. And for expensive homes prices rose 4.8%.

That principle has been true for the past 17 years of the index, covering two housing booms and one housing bust so far. The chart below shows how prices of homes in the low tier (yellow line) rise much faster than higher priced homes, but during the bust, they also plunge much faster and bottom out a lot lower (chart via  John Burns Real Estate Consulting): 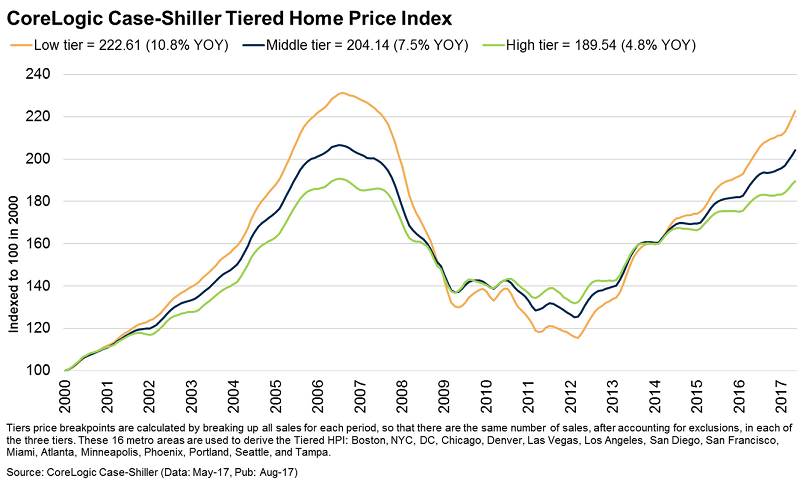 In the current price run-up, the same principle is at work. At the lower end, home prices have soared 88% from the trough at the beginning of 2012 to the last reading, while high-end homes have appreciated only 43% — less than half as much!

“Over the last 17 years, low-tier homes have now risen an average of 4.8% per year, while high-tier homes gained only 3.8% per year despite greater income growth at the high end,” the John Burns Real Estate Consulting newsletter says based on their US Housing Analysis and Forecast:

So what does this mean? If you focus on lower-priced homes, beware that you are investing in a more volatile section of the market from a pricing perspective and beware that lower-priced homes have appreciated the most. Remember that relatively high home prices can last for years (as they did from 2003–2007), so don’t panic.

And it has a piece of advice when things do turn around: “Just consider the risks” of lower priced homes as depicted in the chart above, “and always be ready to react when the market shifts for the better or worse.”

But for investors with large sums at stake, that’s no consolation. Perhaps to battle this situation and have more control over the market when it tanks, the largest single-family rental firms in the US, Invitation Homes and Starwood Waypoint Homes, are merging to form one giant landlord with 82,000 single-family homes, concentrated in the low tier. But as the Burns report says, “don’t panic,” housing bubbles can last longer than seems possible, and so there may still be a little time left.

At the very high end of the housing market, where homes are listed for tens of millions of dollars, BS asking prices are now meeting the ax. Read…  Whiff of Reality at Crazy Super High-End Housing Market?

51 comments for “Volatility in Housing: What Surges & Crashes the Most?”