Commercial real estate’s eight-year boom reached such breath-taking levels that even the Fed has been pointing it out as one of the reasons for tightening monetary policy. The Fed is worried because of the size of the sector, its leverage, and what it did to the banks during the Financial Crisis. And now commercial real estate prices are heading south once again.

Green Street’s Commercial Property Price Index, which tracks the value of property owned by real-estate investment trusts, fell 0.4% in May to the lowest level since May 2016: 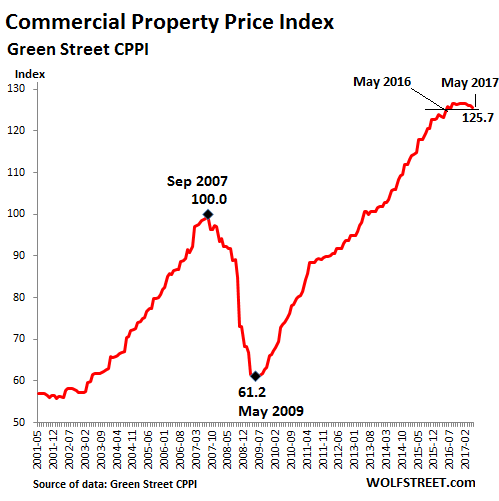 This is not happening because there is some sort of crisis. And this is not a crash, as during the Financial Crisis, when the spigot was suddenly turned off and liquidity disappeared overnight. Instead it’s a slow process that is happening despite super-low long-term interest rates, enormous liquidity in the markets, and super-easy financial conditions powered by yield-chasing risk-blind investors.

One of the primary drivers of the decline are the values of retail malls that have been getting hit by store closings and bankruptcies of their tenants as brick-and-mortar retail is melting down. So the sub-index for malls fell 2.8% in May and 5% for the past three months, and is down year-over-year. Other weak areas are apartment buildings. But industrial space – such as warehousing, one of the beneficiaries of the shift to online retail – remains strong.

Boston Fed President Eric Rosengren, one of the earliest advocates of unwinding QE, started warning about the CRE bubble last year. A couple of months ago, he gave a presentation on what CRE could do to “financial stability,” with some stunning charts.

The “significant decline in collateral values” of both commercial and residential real estate was “the root cause of the financial crisis,” he said. Currently, financial institutions hold $3.8 trillion of CRE loans:

Industry professionals have been expecting the downturn for a while. CRE runs in big cycles of magnificent booms and terrible busts. After about six or seven years of boom, everyone starts looking for signs of the next bust. And these signs are starting to pile up.

This shows up in commercial real estate transactions. Over the first four months in 2017, CRE transactions dropped 17% year-over-year, to $121 billion and have plunged 30% from the same period in 2015, according to Real Capital Analytics.

“Those participants focused on the priciest deals are facing the biggest challenges in the current market,” writes Jim Costello in the report. Large transactions – those over $500 million – experienced the sharpest decline:

But he had some soothing words, ironically by comparing the current situation to the Financial Crisis:

Still, conditions are still far more favorable for the investors active in the $500 million-and-greater space in the current market than in the aftermath of the Global Financial Crisis. Activity for the priciest deals fell from a 4-quarter trailing peak of $231 billion in Q4 2007 to only $1.7 billion by Q3 2009. So, in the current market, it is not like the past where the big game disappeared, there are simply fewer mastodons out and about.

So this is just an early stage in a drawn-out painful down cycle of CRE that will maul loan-by-loan the smaller banks, and it will hit REITs and crush mall REITs, and eventually it will rake holders of commercial mortgage-backed securities over the coals, but unless something big and unexpected happens very suddenly and turns this into a “crisis,” this downturn – unlike the last one – will take its time.

The credit cycle has already turned sour, and the Debt Slaves are beginning to buckle under their loads. Read… Great Debt Unwind: Bankruptcies by Consumers and Businesses Jump

61 comments for “Next Asset Bubble Cracks: It’s so Big even the Fed is Fretting”