The Debt Slaves are beginning to buckle under their loads.

Consumer and business bankruptcies are rising again, after declining for years since the Financial Crisis. That’s not a propitious sign.

For bankruptcy filings by businesses from large corporations to tiny sole proprietorships, the dance started in November 2015. At first it was the energy bust. But bankruptcies of energy companies have tapered off with new money surging into the oil & gas sector once again. Now bankruptcies in the retail sector are steadily worsening, and other sectors too have picked up the slack.

And there’s another concern: Bankruptcy filings are highly seasonal. They peak in tax season – March or April – and then fall off. The decline in April after the peak in March was within that seasonal pattern. Over the past years, filings dropped in May. But not this year. This year, they jumped: 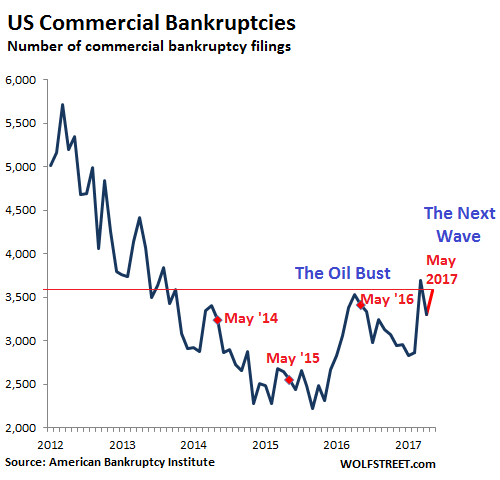 The data is not seasonally or otherwise adjusted but is a raw and unvarnished measure of how businesses are faring in this economy.

Commercial bankruptcy filings ballooned during the Financial Crisis and peaked in March 2010 at 9,004. Then, as credit conditions eased, and as cheap money was looking for a place to go and even zombie companies were able to refinance their debts, filings fell sharply. But November 2015 was the turning point when for the first time since March 2010, commercial bankruptcy filings rose year-over-year.

With consumer bankruptcy filings, a similar pattern played out. But the turning point started a year later, in December 2016, when bankruptcy filings rose 4.5% year-over-year. In January they rose 5.4%. It was the first time consumer bankruptcies rose back-to-back since 2010. I called it “an early red flag” that is “highlighted only afterwards, and with hindsight, as the turning point in the consumer’s ability to continue playing this debt-binge game.” 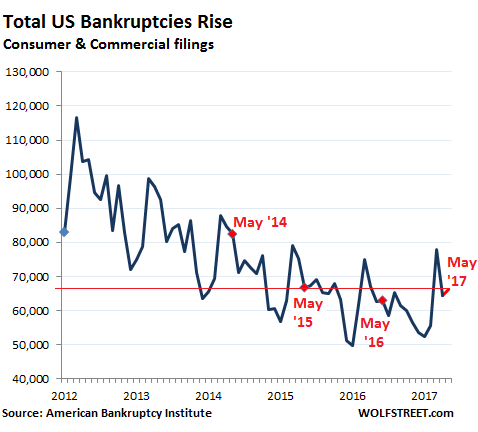 Total US bankruptcy filings by consumers and businesses in May rose 5.3% year-over-year to 69,668, the highest May since May 2014.

Consumers at risk of seeking bankruptcy protection are those with insurmountable piles of debt and stagnating or declining real incomes, of which there are many.

Mortgages, after home prices have been surging for years, are rarely the cause for filing. When homeowners get in trouble with mortgage payments at this point, they can sell the home and pay off the mortgage. And if they can’t and let the bank have the property, the bank will rarely try to obtain a deficiency judgment against the homeowner in the “full recourse” states where it is allowed. And in non-recourse states, the bank cannot even try.

When it comes to consumer bankruptcies, other forms of debts are the primary drivers: largely student loans, auto loans, and revolving credit such as credit cards. And a big one: debts related to medical treatments, such as emergency room bills.

And there is a lot of this debt. Credit card debt, at $1 trillion, is just one notch below the peak during the Financial Crisis. But auto loan balances outstanding have surged 36% from the pre-crisis peak in 2006 to $1.12 trillion in Q1 2017. And student loan balances outstanding have surged 180% over the same period to $1.44 trillion. This amounts to over $3.5 trillion plus medical debts.

While student loans cannot be discharged in bankruptcy, they can be drivers when other debts are involved and the combined debt burden is simply too large for consumers to carry. And they buckle.

Delinquencies on credit cards, according to the Federal Reserve Board of Governors, have been ticking up from the lows of the first half in 2015. Auto loan delinquencies have been rising too, and in the subprime segment, they have been surging. Student loan delinquencies have been very high and have been underreported for years, it now turns out. So when will the first waves of consumers stumble in their debt binge and head for bankruptcy court to seek protection from creditors? That’s what everyone wanted to know. And now the answers are beginning to emerge.

While hiring in May was, according to LinkedIn data, strong in most of the US, there was an exception: in San Francisco and Silicon Valley where tech skills are suddenly “abundant.” Read… It Starts: Hiring Falls in San Francisco Bay Area, Says LinkedIn