The divide in economic confidence has become extreme.

The election had an instant impact on consumer sentiment in the US. From one day to the next, their confidence about the economy surged – though nothing changed in the economy.

The major sentiment surveys all show the same pattern: Confidence soared after the election, peaked in March, and has begun to taper off. The surveys also agree: Economic confidence has soared among Republicans but has plunged among Democrats, and the net effect has been an increase in the overall score.

Gallup’s weekly Economic Confidence Index shows to what extremes both moves have gone, how the surge of economic confidence among Republicans has been far larger than the plunge in confidence among Democrats, and that the overall decline recently isn’t because Republicans are losing faith – their confidence remains at super-high levels – but because Democrats are becoming ever more gloomy.

This chart of Gallup’s weekly Economic Confidence Index shows the Trump Bump right after the election and how it has begun to taper off: 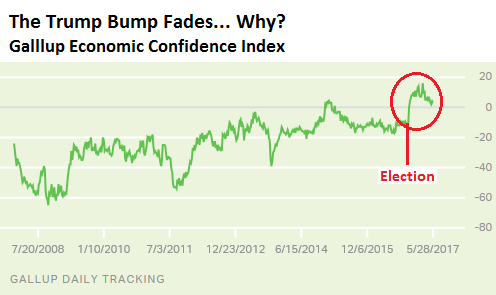 The index started in 2008 during the Financial Crisis. With its theoretical range from +100 to -100, it has consistently depicted consumers as a gloomy bunch, ranging from -65 in October 2008 to a pre-Trump peak of +5 in January 2015.

But after the election, economic confidence jumped, hitting +16 in March. And that was it. By early May it was in the +3 range and has remained there.

The divide in economic confidence has since become extreme – and the economy still hasn’t changed much, neither for Republicans nor for Democrats, and not for Independents, who’re all in the same leaky economic boat.

So what’s causing the Trump Bump to fizzle?

Democrats’ economic confidence (blue line) plunged 59 points, from +30 to -29, and it continues to drift lower without signs of bottoming out yet: 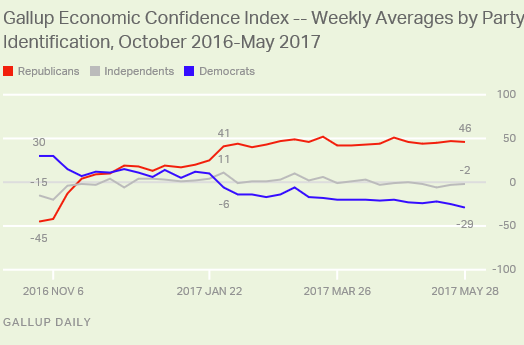 On many measures of national conditions, including economic confidence and satisfaction with the way things are going in the U.S., Americans who identify with the party of the incumbent president rate conditions more positively than do Americans who identify with the opposing party. When the party of the president changes, so do partisans’ ratings of national conditions. That change could occur as soon as a president is elected, as soon as they are inaugurated, or after they have been in office and have been able to enact some of their preferred policies. 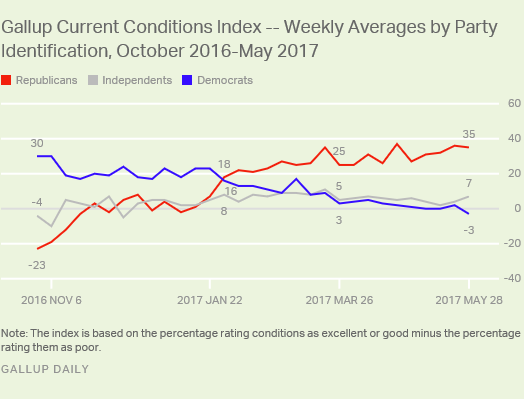 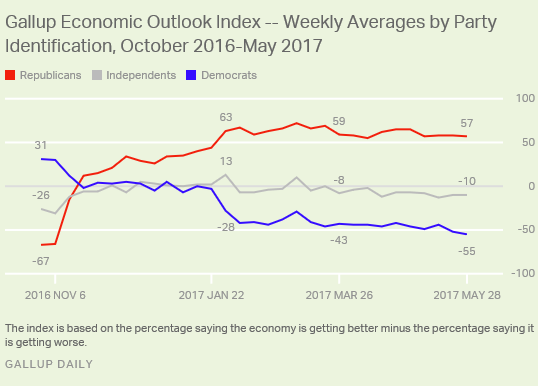 But here’s the thing: hardly anything in the economy has changed in those months since the election, neither to benefit Republicans nor to hurt Democrats. None of Trumps major economic policies have been passed by Congress, and there are increasing doubts as to what exactly will eventually emerge. So the economic reality is the same as before the election: soaring financial markets and subpar economic growth.

Gallup points out that some of this is normal, that “partisans’ evaluations of the economy change when new presidents are elected, when they take office, and in their first months on the job.”

There are other reasons why confidence surveys change, such as stock market crashes, mediatized economic problems, or some Congressional fiascos such as a down-to-the-wire debt-ceiling fight that pushes the US to the edge of default. The Financial Crisis demolished economic confidence for years.

What does it mean for the economy when Democrats descend into gloominess and Republicans become rampant optimists? For one thing, they’re switching roles, with Republicans more confident than Democrats used to be, and with Democrats less gloomy than Republicans used to be. So the net effect should be positive.

But does it impact spending? Does consumer sentiment ever impact spending? Will Republicans, those that have extra money lying around, suddenly spend more than they would have spent before? And will Democrats suddenly close their wallets? The signs say no.

Sentiment surveys are one thing. Real life is another. Over half of the Americans spend every dime they make, plus some. They have trouble making ends meet. How they feel about the economy isn’t going to change their spending patterns. And those with extra money to burn or room left on their credit cards, well, they have not yet stepped up to the plate either.

But neither one apparently wants to go to the mall anymore. Read… Brick-and-Mortar Retail Meltdown Has a Busy Month

113 comments for “Oh My, Those Conflicted American Consumers….”