A stock or bond market tantrum might stop the Fed in its tracks. But the opposite is happening.

The US Treasury 3-month yield rose to 0.94% by late Thursday, the highest since September 2008. It reflects how the market views the Fed’s next action – to be announced after its meeting on June 14. The short-term Treasury market is attempting to read every quiver of the Fed’s lips, what Fed governors are saying on their speaking circuits, the minutes from prior meetings, and so on. And it sees a large probability of a rate hike on June 14: 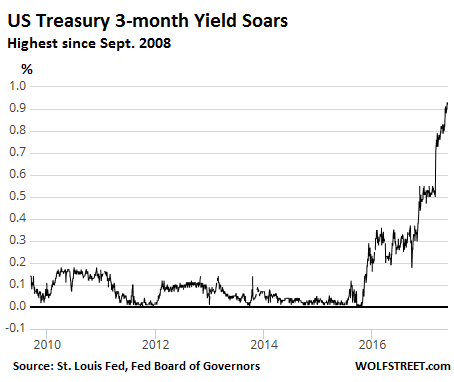 This would mean that the FOMC nudges up its target for the federal funds rate by a quarter point, to a range of 1.0% to 1.25%. It would be the third rate hike since the election in November, one hike every other meeting.

Even one of the most dovish Fed Governors, Lael Brainard, said during a panel discussion yesterday that a brighter outlook for the global economy has shifted the risk balance for the US economy. These words are the kinds of signals the bond market feeds on.

And the minutes from the last FOMC meeting show that unwinding QE and trimming down the Fed’s $4.5 trillion balance sheet is moving closer to reality. QE was designed to drive up asset prices and bring down long-term yields, including mortgage rates. Now the opposite is being planned.

Currently, the Fed replaces securities on its balance sheet as they mature. So every few days, it buys Treasuries and mortgage-backed securities. Now the Fed is getting into the nitty-gritty of how it will trim down its balance sheet. The “staff” is working on it and gave a presentation on the “possible operational approach” at the last meeting.

So they have a plan. It will probably kick off later this year, but perhaps as soon as September, according to JP Morgan’s Chief US Economist Michael Feroli who worked at the Federal Reserve Board until 2006.

The Fed is removing “accommodation,” as it calls this, across the spectrum: at the short end by raising the target for the federal funds rate, and at the long end by allowing QE to unwind. This includes mortgage-backed securities, which would remove some of the support under mortgage rates.

It’s a momentous move. But markets brushed it off.

The bond market is going along with short maturities. Short-term yields, such as the three-month yield, have been rising in preparation for more rate hikes. But at the longer end, the bond market is going the opposite way. The 10-year yield and the 30-year yield have fallen. And stocks have hit new highs. Thus, markets are in fact loosening monetary conditions, rather than tightening them.

The ten-year yield, at 2.24%, is also lower than it was on December 14. With the 12-month CPI inflation rate at 2.2%, investors are not even being compensated for loss of purchasing power  (red line = current yields, blue line = yields on December 14): 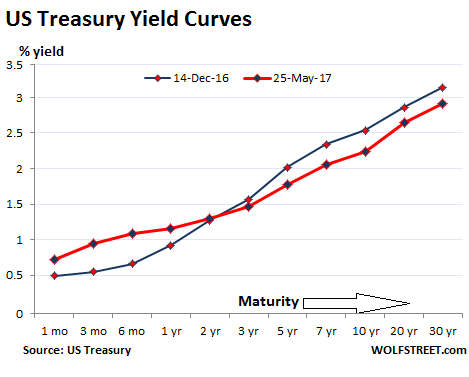 A flattening yield curve is considered by some a sign of troubled economic waters ahead. There are a slew of reasons for this phenomenon of dropping yield at the long end of the curve in face of the Fed’s actions and plans, among them:

With stocks at all-time highs and borrowing costs ultra-low, financial conditions for companies have actually eased since the Fed stopped flip-flopping in December and got serious about tightening, and they have eased further since unwinding QE has morphed from a crazy idea into an action plan.

This is corroborated by the St. Louis Fed Financial Stress Index which indicates that “financial stress” in the markets is extremely low. The black horizontal line (zero) denotes “normal financial market conditions.” Values below it “suggest below-average financial market stress.” And now they’re near record lows and dropping as if QE infinity were still the law of the land:

As long as markets are not getting the message and as long as financial conditions in the markets are getting looser, instead of tighter, the Fed has all the more reasons to proceed. A tantrum by the stock and bond markets might stop the Fed in its tracks. But the opposite is happening.

After surging for years, quant hedge funds – where trading is done by machines, not humans – now dominate stock trading. Read…  Will Quant Funds Trigger the Next Stock Market Crash?

58 comments for “Are Markets Blowing off the Fed?”