“Green gold.” That’s the new name Mexicans have given to avocado, one of the country’s staple foods and most important agricultural exports. Unlike real gold, the price of green gold is soaring, having more than doubled in the last year alone, to reach an average price of 71.4 pesos ($3.85) in Mexico City, according to data from Mexico’s National Institute of Statistics and Geography (Inegi).

Avocado prices are soaring for a whole variety of reasons, including rising global demand. Mexico is the world’s biggest exporter of avocado, accounting for just under half of the global market. And that market is growing by the day, particularly in the U.S., Europe, and China. But there’s another reason why the price of green gold is rising in Mexico, and it’s much closer to home: inflation.

After decades of trying to tame the tempest of rising prices, with a reasonable degree of success, Mexico’s inflation rate soared to 6.17% in May, as measured by the INPC, the CPI version used by Inegi. It was fueled largely by the rising cost of food and energy after the government hiked gasoline prices by almost one-fifth at the beginning of the year. It’s the highest inflation rate since April 2009 and over double the Bank of Mexico’s benchmark rate of 3%. 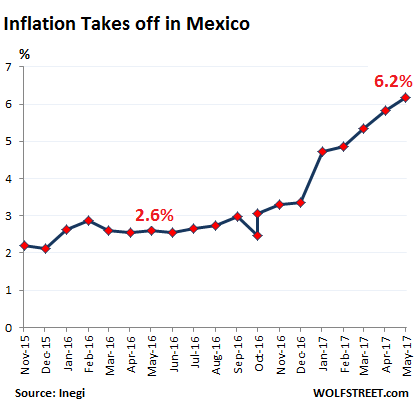 But it’s the pace of change that is most disconcerting: this time last year inflation seemed “contained,” at 2.6%.

That was before the Mexican peso felt the full brunt of the Trump effect. From August 16, 2016, to January 18, 2017, the peso shed 18% of its value against the dollar, to an all-time low of 22.22 pesos to the US dollar. Since then, the peso has gained the most against the greenback of any major currency, bouncing back to 18.5 pesos to the dollar.

But prices keep rising, even as the Bank of Mexico throws everything it can at the problem. It has hiked its policy rate repeatedly. Today it stands at 6.75%, compared to just 2.5% early last year. This surge in borrowing costs is meant to help address the challenge of anchoring mid- and long-term inflation expectations, but it could also end up choking internal consumption and investment.

The current inflation rate is still far below the levels seen in the midst of the so-called Tequila Crisis in the mid-1990s, when inflation reached 50% as the newly free-floating peso tumbled against the dollar. The savings of much of the country’s middle class was wiped out. Those who had the foresight or sheer fortune to have the bulk of their savings or investments in dollars made a killing. Those who had no savings at all saw the purchasing power of their income plummet as taxes and fuel prices were hiked.

During Mexico’s Lost Decade, the 1980s, the fierce hangover from the Latin American debt crisis, coupled with a surging dollar, pushed inflation to an all time peak of 180%. That was in 1988. It took years to bring inflation under some semblance of control. But the damage had already been done. From 1974 to 2017 the average rate of inflation in Mexico has been over 25%.

Now the specter of inflation is once again rising, and with it the prospect of widespread social protest: a taste of which Mexico already had at the beginning of this year in the wake of the gasolinazo.

To calm the waters, some politicians have begun to call for a semi-commensurate rise in the lowest wages. Miguel Ángel Mancera, the chief of government of Mexico City, just called for a short-term hike of the country’s minimum daily wage to 92 pesos ($4.97), with a view to raising it in the medium term to 120 pesos (just over $6). But if inflation continues to surge, these kinds of wage increases are unlikely to go very far, especially with basic food staples and gasoline on which Mexicans spend a disproportionately big part of their incomes. By Don Quijones.

Gasoline theft is the second most profitable activity for Mexico’s crime gangs, now that gasoline prices have soared. With consequences. Read…  The Pillage of Pemex Turns Bloody