Just as the deflating Farmland bubble leaves its marks.

When it comes to agricultural debt, the numbers aren’t huge enough to take down the global financial system. But this shows how much pain the commodities rout is producing in the farm belt just when the farmland asset bubble that took three decades to create is deflating, and what specialized lenders and the agricultural enterprises they serve – some of them quite large – are currently struggling with in terms of delinquencies.

This is what delinquencies on loans for agricultural production – not including loans for farmland, which we’ll get to in a moment – look like: 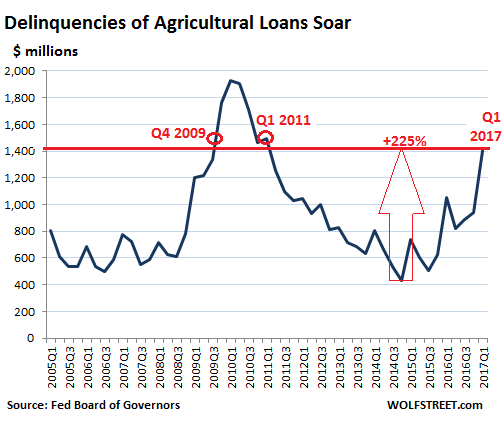 From Q4 2014 to Q1 2017, delinquencies have soared by 225% to $1.4 billion, according to the Board of Governors of the Federal Reserve, which just released its report on delinquencies and charge-offs at all banks. This is the highest amount since Q1 2011, as delinquencies were falling after the Financial Crisis. That amount was first breached in Q4 2009.

The delinquency rate rose to 1.5%, the highest since Q3 2012. On the way up, going into the Financial Crisis, delinquencies breached that rate in Q1 2009. 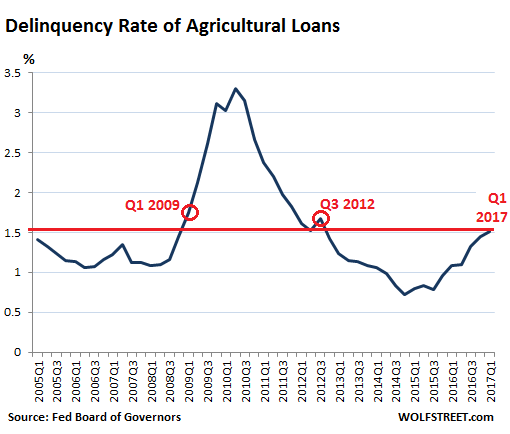 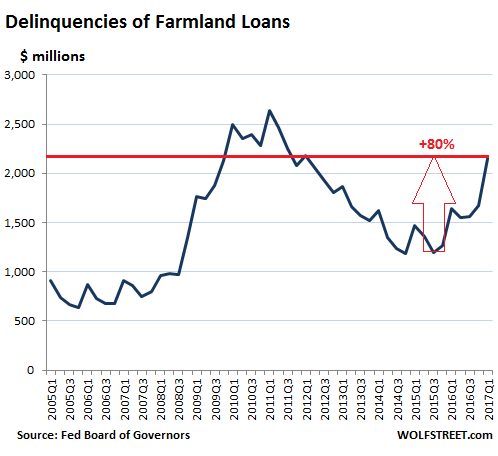 Farmland values have surged for three decades but are now in decline in many parts of the US. For example in the district of the Federal Reserve of Chicago (Illinois, Indiana, Iowa, Michigan, and Wisconsin), prices soared since 1986, in some years skyrocketing well into the double-digits, including 22% in 2011, and nearly tripling since 2004. It was the Great Farmland Bubble that had become favorite playground for hedge funds. But starting in 2014, prices have headed south. 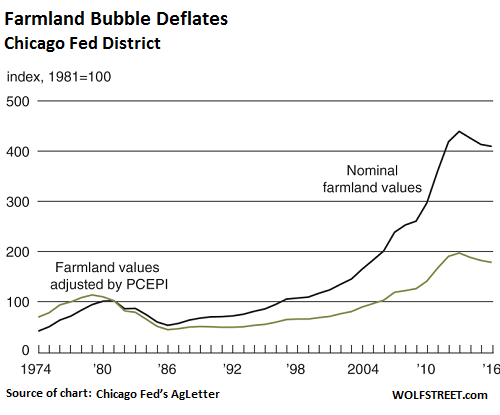 Adjusted for inflation, farmland prices in the district fell 9.5% over the past three years. The exception is Wisconsin:

The Chicago Fed adds this about the deflating farmland asset bubble, in inflation-adjusted terms:

Even after three annual declines, the index of inflation-adjusted farmland values for the District was nearly 60% higher in 2016 than its previous peak in 1979.

Does it mean to say that there is a lot more air to deflate out of the farmland bubble and a lot more pain to come and that this is just the beginning? Or is it saying that this is no big deal?

These falling farmland prices are making the debt much more precarious. So on a nationwide basis, the delinquency rate of farmland loans, according the Fed’s Board of Governors, jumped from 1.46% in Q3 2015 to 2.0% in Q1 2017.

In terms of magnitude of the dollars involved, agricultural and farmland loans pale compared to consumer or commercial loans. So the problems in the farm belt won’t cause the next Global Financial Crisis, and it progresses on its own terms. But it is putting strain on agricultural lenders, growers, and their communities.

Another asset bubble, a global one, is quietly but persistently experiencing a downturn that parallels and in some aspects already exceeds the one during the Financial Crisis. What the slow crash of classic cars says about the future of other asset classes. Read…  This Is How an Asset Bubble Gets Unwound these Days