More #Carmageddon data – and its impact.

This is just relentless: Wholesale prices of used vehicles up to eight years old going through auctions across the US dropped another 1.5% in April from the prior month.

It pushed the seasonally adjusted Used Vehicle Price Index by J.D. Power Valuation Services (formerly known as NADA Used Car Guide) down to 109.9. The 10th month in a row of declines.

The index is down 7.1% year-over-year and down over 13% from its peak in mid-2014. It’s at the lowest level since September 2010, when prices were still spiking from the cash-for-clunkers program which had eliminated a whole generation of often perfectly good cars. In that sense, values are just now beginning to normalize (chart by J.D. Power Valuation Services): 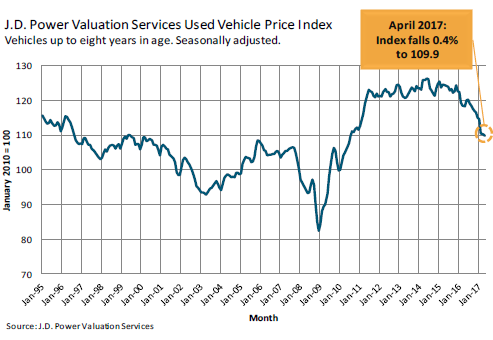 According to the report, “the used market continues to experience negative pressure from a struggling new market.”

This decline in used vehicle values is confirmed by the Consumer Price Index. According to the Bureau of Labor Statistics, used car and truck prices fell 4.6% in April over the past 12 months. It was the only major category with a significant 12-month decline. There were two other major categories with declines, but declines were small: the index for food at home inched down 0.8% and the index for commodities less food and energy inched down 0.6%. So the sharp drop in used vehicle prices stands out.

Will the Fed worry about these used vehicle prices as a sign of deflation? Nope. It’s a sign of an oversupplied and still overpriced market. As prices drop, more buyers will emerge and the oversupply will work its way out of the system, but at the expense of new vehicle sales.

This is already happening. New vehicle sales in April dropped 4.7% year-over-year. For the first four months, sales are down 2.4%. This decline has occurred despite automakers’ record but apparently futile spending on incentives to crank up the market.

Then there’s the problem of consumer debt.

Lenders – including the captives of the automakers – were eager to finance the vehicle boom of the past seven years. This debt has ballooned and some of it, especially at the subprime end, is now defaulting, and lenders are tightening their underwriting standards. The results are already visible.

While total auto loans and leases outstanding still rose in Q1, they rose by “only” $8 billion, less than half of the average quarterly increase over the past five years of $17.5 billion. At its peak, in Q3 2015, total balances soared by $31.8 billion, which was the peak of the auto boom. By these standards, the increase in Q1 this year was anemic: 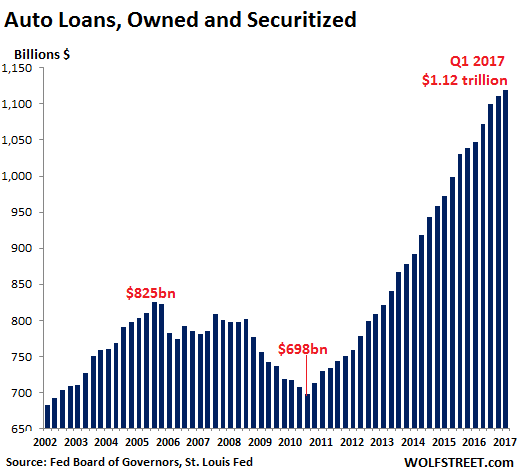 How did the used-vehicle segments fare in April?

Wholesale prices fell the most for luxury large cars, down 4.4% from March, followed by compact and subcompact cars. The only two segments that gained in April – luxury large SUVs and mid-size pickups – both had lost value in March (-1.8% and -0.6% respectively): 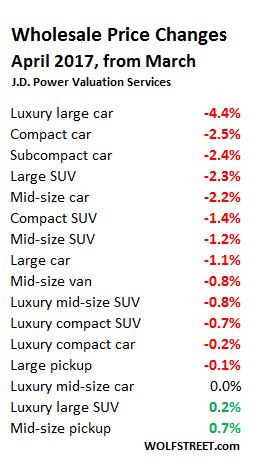 Auction volume of vehicles up to eight years old in April, at 366,909 units, was about flat compared to a year ago. Late-model volume (up to three years old), largely rental cars and lease returns, edged down 1% in April to 224,381. This is a shift from the prior months, when auction volume of those cars had been heavy.

More likely, it’s a sign of the calendar: the Easter holiday, which slows down the wholesale business, was in April this year. Last year it was in March. This theory is supported by year-to-date late-model volume: at 955,447 units, it’s up 7% from the same period a year ago. So the flood of auction cars is unlikely to abate anytime soon and prices are expected to decline further this year.

These used vehicle price declines and the plethora of late-model vehicles hitting the retail market impacts new vehicle volume and how new vehicle deals are made.

For dealers, the wholesale price drop translates into lower cost. It’s dealer nirvana. Dealers can make more money on used cars than on new cars. And they’re buying these units, and they’re selling them. But these sales are taking sales away from new vehicles piling up on their own lots. That’s how the oversupply problem of used vehicles will be solved: at the expense of new vehicles.

Lower used-vehicle values also impact other aspects of new-vehicle deals. The May edition of the NADA Official Used Car Guide cut its trade-in values on average by 2.8% from a month ago. Trade-in values of subcompact cars got slashed by nearly 5%. This reduces the equity of the trade-in – or more often, it increases its negative equity, which is at a record on average, just when lenders are tightening their lending standards. As a consequence, it will be harder to get new vehicle deals financed, and more customers will be switched to used vehicles…. So it looks like automakers will face a lot more pain.

What the slow crash of classic cars says about the future of other asset classes. Read…  This Is How an Asset Bubble Gets Unwound these Days