What the slow crash of classic car prices says about the future of other asset classes.

The global asset class of collector cars – these beautiful machines are perhaps one of the most enjoyable asset classes to play in – is quietly but persistently and very unenjoyably experiencing a downturn that parallels and in some aspects already exceeds the one during the Financial Crisis.

Unlike stock market indices, the Hagerty Market Index is adjusted for inflation via the Consumer Price Index. So these are “real” changes in price levels.

In the chart below from Hagerty’s May report (I added the dates), note how the index surged 83% on an inflation-adjusted basis from August 2009 to its peak in September 2015. This represents a nominal price surge (not adjusted for inflation) of 95%: 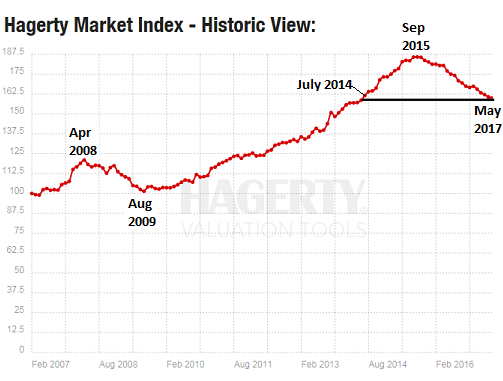 The index is now at the lowest level since June 2014. “With the latest release of values in the Hagerty Price Guide, prices have started to normalize,” the Hagerty report commented.

Among the “Drivers of this month’s decrease,” according to Hagerty:

The number of owners expressing the belief that the values of their vehicles are rising is still falling. The drop was more pronounced for the owners of mainstream vehicles, but the number for owners of high-end vehicles who feel values are increasing is also at a five-year low.

Market observers have cited a split in the market between entry-level vehicles and the top of the market, where more affordable cars are showing strength as the top end is contracting.

This is how an asset bubble during these crazy times of easy money around the globe, central bank “wealth effect,” and endless liquidity gets unwound: In small, nearly imperceptible but relentless increments with plenty of confusing ups and downs, as buyers become just a little less enthusiastic month after month, and as sellers become just a little more eager month after month, seeing whatever they’re seeing on the horizon. There’s zero signs of panic at this point, and there’s no forced selling at this point – but those tiny orderly increments add up after a while.

Prices of collector cars move similarly to those of other asset classes, such as equities or real estate, both residential and commercial. They surged up to the Financial Crisis. They crashed in a panic – hence the “crisis.” And they reacted in near-unison to central bank money printing, zero-interest-rate policies, and gargantuan bailouts of banks and industrial companies. Central banks made cheap liquidity available expressly to pump up asset prices. And that worked. But it doesn’t work forever.

This time around, asset prices are inflated far beyond where they’d been before the Financial Crisis, but there is no panic, and there is no crisis. Liquidity is still sloshing knee-deep through the system. And some of the largest central banks, including the ECB and the Bank of Japan, are still engaging in massive QE operations.

So collector car prices indicated what’s in store: Despite all liquidity and QE, prices can rise only so far, and then investors back away, gradually, one after the other.

In this process, markets will prove everyone wrong – prices weren’t “plateauing, and they weren’t “normalizing,” and the “buying opportunities” were in fact, with hindsight, selling opportunities.

But given the liquidity in the markets, and policy interest rates that are still close to zero, and in some cases below zero, and in all cases way below inflation, there may not be a theatrical, panic-induced crash as there was during the Financial Crisis. More likely is a slow but relentless zigzagging lower to what may be more rational levels, which would be a whole lot lower.

But it may spread over years, and may be slow enough and uncertain enough, with enough upticks in between, that central banks don’t feel compelled to unleash more QE, and it may exasperate everyone in the markets. At some point, the economy’s main focus might shift away from financial engineering and asset-bubble betting to productive activities. And that might actually be a positive for the real economy.

Up 10,000% in 16 months? These charts truly depict our crazy times. Read…  What the Heck’s Going on With Cryptocurrencies?