And the rest of the S&P 500? On March 1, the index closed at 2,394. Today it closed at 2,397. In those 10 weeks, it went absolutely nowhere. Which means this: the remaining 495 stocks in the index lost as much in total market capitalization as the FAANG stocks gained.

This chart shows the impact of “the new 1%,” as John Alexander at MacroCharting calls them, versus the 99%: 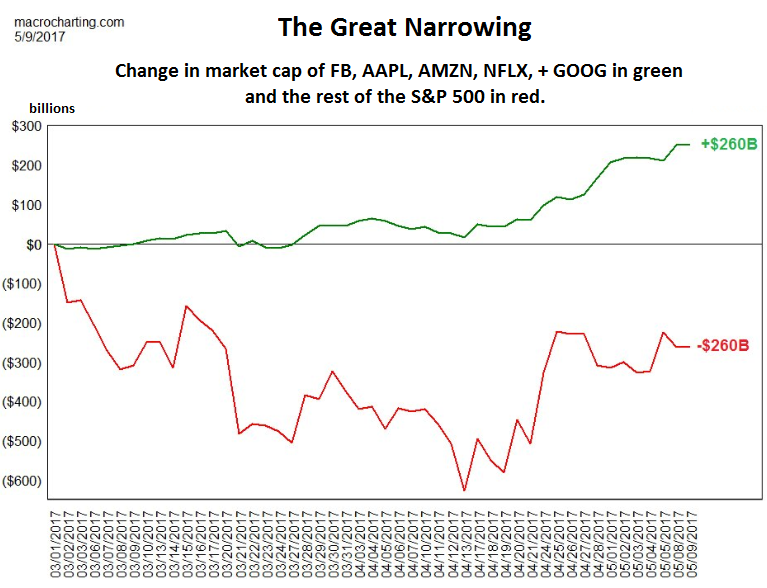 Facebook has been edging lower from its high of May 2 and today closed at $150.48, which still gives it a market capitalization of $436 billion.

Apple, which closed at a high of $153.99 today, hit a market cap of $802 billion, after the Warren Buffett surge. Via a quarterly SEC filing, his investment vehicle disclosed that its holdings of Apple shares had jumped to $19.2 billion as of March 31, from $7.1 billion on December 31. It now owns 133.65 million shares. The filing was immediately mediatized. Buffett’s avuncular face appeared on CNBC yesterday. Everyone talked about it. And after already rising due to this enormous buying pressure, Apple shares surged some more.

He has a powerful megaphone. He can even move the shares of a giant like Apple and benefit handsomely from his megaphone. If Apple moves 10%, $80 billion move along with it, up or down.

Amazon rose to a high of $952.82 today. Everyone is itching to short this stock. A lot of people followed their itch to short it at $100 a share, and then at $200 a share, and so on, getting their heads handed to them all along the way in this crazy market. The stock now sports a market value of $455 billion and a PE ratio of about 180.

Netflix is the dwarf in this bunch with a market cap of $68 billion. But it gained 10% in those 10 weeks. Its PE ratio is 203. But unlike Tesla, moving closer with its market cap of $52 billion, Netflix at least has a positive PE ratio.

The five FAANG stocks combined have a market value of $2.4 trillion. That’s the size of the GDP of France. And just forget the rest of Corporate America and its struggles. On the other hand, a decline of 30% – not unheard of with these stocks – wipes out $720 billion. But we’ve been reassured: that’ll never ever happen again.

So clearly, it’s not all careening downhill, at least not for everyone. But when it comes to internet advertising, which is surging, only Alphabet and Facebook matter. Read…  Internet Ad Revenues Surge, Only 2 Companies Get the Spoils