Wouldn’t it be great if a big hedge fund could borrow for five years at a fixed rate of 2.05%, just barely above the cost that the US government pays for five-year debt (1.81%)? It’s especially great considering that inflation, as measured by the Consumer Price Index, is 2.4%. In real terms, the rate on this five-year loan would be negative.

Or borrow at 1% daily rate? This would be way below the rate of inflation. And on the rare occasion that creditors gang up on you and try to get their money back all at once, the Fed steps in as lender of last resort. You can rely on that. So no biggie.

You could lend this money out at 5% or 7% or, if you’re into credit cards, at 21%, for example, and keep the difference. Or better, you could bet with this money on the riskiest trades, some of them long-term illiquid deals that might take a decade or longer to unwind. Or you could play with highly leveraged derivatives.

If you could just gather up hundreds of billions of dollars in this manner, or perhaps even a trillion, you could make some serious bucks.

If your bets blow up and the borrowed money disappears, your creditors have a government guarantee. They’re not worried about the risks you’re taking. And they’re ecstatic to lend you the money below the rate of inflation because the yield they’re getting is just a tiny bit higher than what they’re getting in their savings accounts and CDs.

That’s exactly what Goldman Sachs is now seriously pushing into – not dabbling, as it has been – as a major funding source.

“It carries … great strategic potential,” Chief Strategy Officer Stephen Scherr told Reuters today. “The ambition we have is for the retail deposit platform to grow so that it becomes a real, sizable channel.”

This “retail deposit platform” is its online bank for regular savers.

Goldman isn’t the first to figure this out. All banks in the US benefit from this cheap moolah, assuming they know what to do with it, like Goldman is hoping to play this game. Among the biggest: JP Morgan Chase – with $1.4 trillion in deposits – Citibank, Bank of America, and Wells Fargo.

Goldman isn’t in their club. But Goldman wasn’t actually a commercial bank until the Financial Crisis. In order to get bailed out by the Fed, it had to become a bank holding company overnight. Until then, it was a hedge fund and an investment bank.

Some banks are just divisions of credit card companies or other companies that need cheap money, such as American Express Bank or Capital One Bank. They advertise “high-yield” deposit products – “high-yield” only when compared to zero.

There’s a lot of money to be obtained in this manner. All US commercial banks combined sit on a mountain of deposits that has now reached $11.7 trillion: 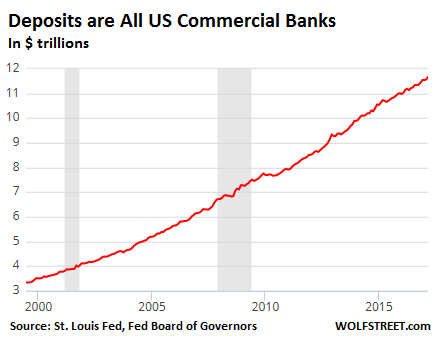 Goldman wants to get its share of this mountain. A first big stepped occurred in April last year, when Goldman announced that its “GS Bank” acquired the “online deposit platform” of GE Capital Bank. This included $16 billion of deposits. Of that, about $8 billion came from individual savers. Scherr told Reuters that Goldman has since attracted another $4 billion from savers, bringing the total to $12 billion. And they’re going to grow the online bank further, he said.

This is how GS Bank pushes the strategy on its website:

Through its services for its wealthy clients, Goldman holds additional deposits. Total deposits on its balance sheet amount to $124 billion. Peanuts compared to the big guys.

To induce regular prudent savers – a kind of clientele that Goldman has spurned for so long – to lend Goldman their money, it has decided to offer deposit rates that are still ludicrously low, but slightly higher than those of some banks with a large deposit base.

The goal is simple: Get a relatively stable and very low-cost source of funding – low cost because the deposits are government-insured and creditors who stay within the FDIC limits don’t have to worry about Goldman Sachs blowing up. As Reuters notes, this is “designed to boost profits” and “may help it better weather future disasters.”

So it’s time to prepare for these “future disasters.” What’s surprising is that it took Goldman so long to figure this out. Perhaps its distaste bordering on scorn for regular prudent savers has kept it from pursuing their money.