I hope the forecasting model is broken.

The Atlanta Fed’s GDPNow forecast for first-quarter 2017 economic growth in the US dropped further, this time to 0.2%. This seasonally adjusted “annual rate” of GDP growth means that if the economy grows like this for four quarters in a row, it would grow only 0.2% for the entire year.

Economic growth in 2016 was 1.6%, which matched 2011 as the worst year since the Great Recession. So the current forecast of Q1 GDP growth of 0.2% annual rate looks ugly. I just hope that the model is broken and that some internal gears have jammed.

The forecast is down from the already ugly 0.5% at the last publication of the GDPNow forecast on April 18.

As the GDPNow model picks up data for the quarter, it gets more accurate in predicting GDP growth to be reported by the Bureau of Economic Analysis in its first estimate for that quarter. With the last batches of March data piling up, the GDPNow forecast is now just a hair above zero. This has been a steep plunge from 2.5% at the end of February to my red marks today: 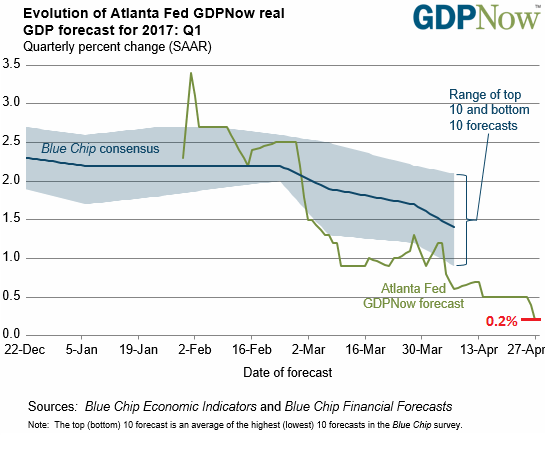 Since the last report on April 18, new data points have arrived and have left their marks:

Existing-home sales (April 21). No change in the forecast.

New-home sales (April 25). No change in the forecast.

Retail trade revision (April 25) pushed the forecast for consumer spending from already weak growth of 0.3% to near stagnation of 0.1%.

Durable goods manufacturing (reported today by Census Bureau) and the light trucks sales to businesses (reported by BEA on April 25) caused the forecast of real equipment investment growth to rise from 5.5% to 6.6%.

Wholesale and retail inventories (today) caused the forecast of the contribution of inventory investment to GDP to fall deeper into the negative (from -0.76 percentage points before) to -1.11 percentage points today.

Ironically, this is about where today’s Blue Chip consensus estimate is once again (the dark blue line in the chart above).

That GDP release by the BEA on April 29, 2015, shocked economists, and they blamed it on the weather – the polar vortices blowing across much of the country. Though everyone could see the weather, it didn’t make it into their forecasts. But the Atlanta Fed model, though it too gets it wrong plenty of times, had an uncanny sense of accuracy when no one else seemed to believe it.

So the hope that some internal gears might be jamming up the forecasting model this time around and that Q1 2017 GDP growth will actually come out much better may be wishful thinking.

As so many times, Private Equity firms are in the thick of it. Read…  I’m in Awe of How Fast Brick-and-Mortar Retail is Melting Down