The big shift to mobile advertising.

Internet advertising revenues in the US soared 22% in 2016 from a year earlier to a record of $72.5 billion, surpassing for the first time in history the $69 billion spent on TV ads.

And mobile wins. All these people with their eyes glued to their smartphones as they walk into traffic or sit in a restaurant across from their friends, date, or spouse, they’re consuming ads, constantly:

This chart shows the annual internet advertising revenues going back to 2003. Note in crisis-year 2009 the tiny 3% dip – that’s all. Also note the acceleration of the increase in 2016. That 22% or $12.9 billion jump was the biggest, both in percentage terms and in dollars in history. Since 2012, revenues have nearly doubled: 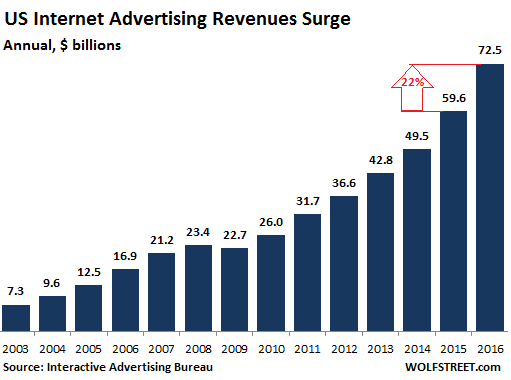 Other key milestones for advertising revenues in 2016:

But not everything is rosy:

This chart shows the loss of market share by desktop search ads, desktop banner ads, and desktop “other,” as mobile grabbed over half of the market (chart via IAB): 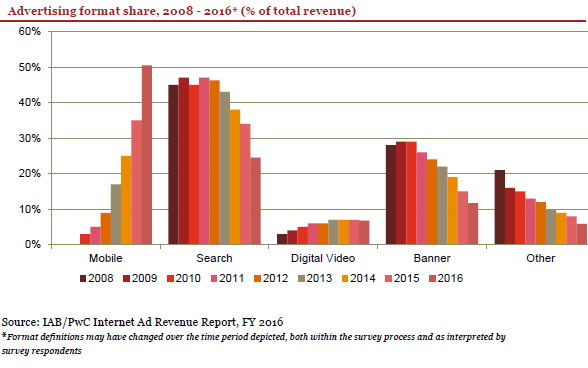 Here are the ten largest sectors in terms of their share of total internet advertising spend in 2016 (compared to 2015):

The 10 leading ad-selling companies accounted for 73% of total revenues in Q4 2016, according to the report. So who are these 10 companies that grab the largest share of these revenues? The report didn’t say. But analysts for the Pivotal Research Group, cited by Reuters, reported the only two names that really matter: Facebook and Google.

In terms of the industry growth, so in terms of the 22% or $12.9 billion year-over-year increase in total internet advertising revenue, Facebook and Google together grabbed 99% of the growth!

They’re sitting at the sweet spot. Everyone else is fighting for crumbs.

This explains some aspects of the Twitter fiasco. Behind its dazzling homemade metrics, Twitter reported today an ugly reality: Global revenues in the first quarter dropped 8% to $548 million, the first ever year-over-year decline. And advertising revenues in the US, the core of its business model – yes, internet advertising, including mobile where Twitter is big – plunged 17%.

So as Twitter’s US ad revenues collapse, it has embarked on cutting costs to manage its decline. Read… Twitter Revenue Plunges for First Time Ever, Stock soars

59 comments for “Internet Ad Revenues Surge, Only 2 Companies Get the Spoils”