How far can a desperate government go to keep the whole overleveraged edifice of a housing bubble from tumbling down and doing God-knows-what to the economy and the banks? Australia is trying to find out.

The housing bubble in Sydney and Melbourne, by now among the top in the world, is taking on grotesque proportions, not only in price increases, but also in political pronouncements. So much of the economy depends on this bubble that no politician can imagine bringing it down to earth.

Prices for all types of homes in Sydney jumped 19% in March year-over-year, according to CoreLogic, with houses up nearly 20% and “units” (we’d call them condos) up 15%. Sydney’s home prices have nearly doubled since 2008.

In Melbourne, overall home prices jumped 16%, with houses up 17%, and condos up 5%. The index for all dwellings in Canberra and Hobart also rose in the double-digits. In Adelaide and Brisbane, prices rose in the mid-single digits. Perth and Darwin showed declines in the 4.5% range.

The CoreLogic index is not based on sales pairs, such as the Case-Shiller index in the US, or on median prices, but on its own “hedonic methodology,” which, like the other two methods, has plenty of critics.

The government has its own Residential Property Price Indexes. The latest edition, released on March 21, was for Q4 2016, so a little slow. Based on the median price, the index for Sydney jumped 10.3% and for Melbourne 10.8%.

Real estate is highly leveraged, and household debt is at an all-time high. Wages even in Sydney haven’t risen at the same pace. So the inevitable is beginning to happen. Affordability becomes a political issue, and delinquencies become a financial issue.

Standard & Poor’s warned on Thursday that delinquencies of mortgages underlying Australian prime residential mortgage-backed securities rose to 1.29% in January, from 1.15% in December. The largest increase occurred with mortgages that were 31-60 days delinquent, a sign that more borrowers had failed to make mortgage payments for the first time.

Allegations of mortgage fraud and other misconduct, including “liar loans,” have been documented in the media and by researchers for a while. LF Economics has submitted a report to the Senate Standing Committees on Economics of the Australian Parliament, which boils down to this:

[O]ur research into the mortgage market and banking system provides evidence to suggest many borrowers have or are at risk of becoming a victim of fraud, committed by lenders.

So it’s all there. Well, there was also this…

On February 24, Anthony Roberts, New South Wales Minister for Planning and Housing, was speaking at the launch of a 690-unit apartment development at Olympic Park, a suburb of Sydney, heaping praise on the developer for having committed to offer 60 units first to first-time buyers.

A new policy on housing affordability would be announced in the “very near future,” Roberts said. But as a first step, he threw in an incentive for first-time buyers. Instead of the normal 10% down payment, they’d only need to make 5%. “This is the beginning, this is the start,” he said.

And in hyping the Sydney housing market and the importance of getting in now or be priced out forever, he also said this: 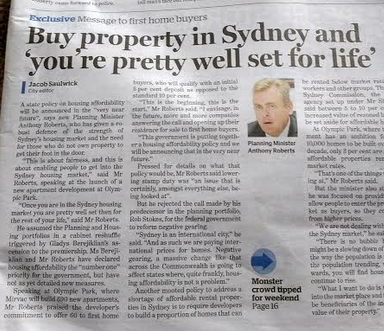 But regulators are worried. Not that they will seriously try to prick it, but they’re trying to “contain” it, as it were. In that regard, the Australian Prudential Regulatory Authority (APRA) introduced in December 2014 an annual “speed limit” of 10% on how much banks could expand their loans to investors. This hasn’t helped, obviously.

So on Friday, APRA told banks to slash new interest-only loans to 30% of total new mortgage lending, from 40% now, according to Reuters. It also threatened to do a lot of “monitoring,” “scrutinizing,” and “observing.”

The mortgage industry isn’t exactly quaking in its boots. But banks have been raising their interest on variable rate loans to investors. Reuters cites loans from Australia’s largest mortgage lender, Commonwealth Bank of Australia, whose rates are “as high as 5.94%, compared with 5.25% for owner occupiers and an official cash rate of 1.5%.” So no problem. Fat profits for the bank for now.

But political resistance could mount to regulators’ however feeble efforts to contain the housing bubble. The infamous words – “Once you are in the Sydney housing market, you are pretty well set then for the rest of your life” – indicate that politicians are going to promote this game to the bitter end.

They fear that property prices that fall for an extended period of time until they’re actually affordable can send a lot of economic and financial shrapnel in all directions that no politician wants to catch. And it’s not just politicians. Reuters:

Regulators are also worried about the risks from a slowdown in the home-building boom. According to official estimates, every A$1 spent on residential construction generates A$1.31 worth of spending elsewhere in the economy, and every A$1 million creates 17 full-time jobs.

Not to speak of the banks. Once a bubble reaches this grotesque level, there are no longer any good options. So trying to lure new people into it to keep it inflated for as long as possible becomes the name of the game.

But some places in Australia are already getting hit. It shows what happens when “Ponzi finance schemes are stuck firmly in reverse gear.” Read…  Commodities Bust Crushes Incomes, House Prices, & Rents in Western Australia