Condo sales in Miami-Dade County have plunged. Condos on the market have surged. Supply has hit 14 months. Developers are sitting on completed units they can’t sell, and months’ supply in their projects has reached several years.

With this kind of supply-and-demand imbalance – sales down 25% from February 2014, inventory up 90% since early 2013 – you’d expect prices to head south. But the median price of condos in February, according to the Miami Association of Realtors, increased 6.3% year-over-year. This is the mystery we’ll shed some light on (chart by StatFunding): 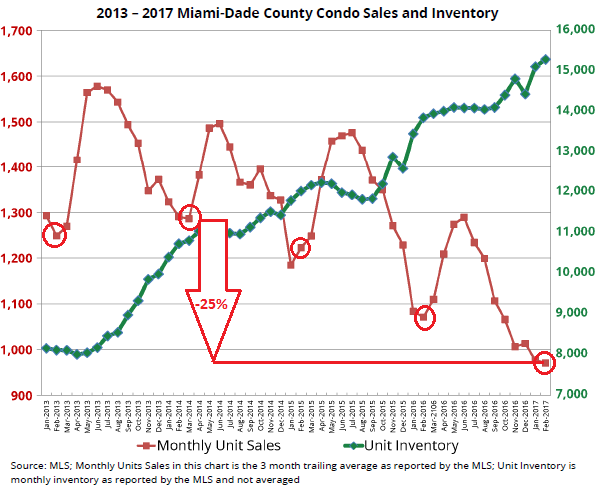 StatFunding conducted an analysis of sales price per square foot in four condo projects with 2,634 units in Brickell, an area of Miami that is part of the “condo corridor.” These projects – 1050 & 1060 Brickell, Axis Brickell, Plaza Brickell, and Jade Brickell – are representative of the overall condo market. Turns out, per-square-foot prices in those four projects peaked in 2014 and 2015 and have since dropped between 10% and 16%.

So what’s going on?

One of the projects was completed in 2004, the other three in 2008. Hence there is a sales history. They’re “newer” and well-maintained projects in the aspiring-luxury and luxury categories of the market. Each project was built by a different developer (pricing data as of March 2017, based on the Multiple Listing Service (MLS) and the Miami-Dade Recorder).

The three projects completed in 2008 got caught up in the foreclosure crisis when these units were liquidated at prices as low as $200 a square foot. Whoever bought them at this price more than doubled their money by 2014! But that party has now ended. 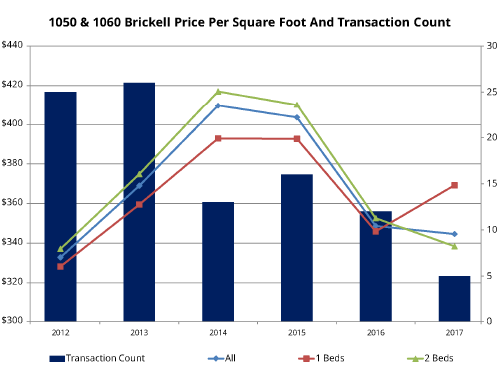 In this particular project, studios, lofts, and units below the 14th floor were excluded. Here’s why:

The layout of the building is peculiar: The parking pedestal is shared by both towers, and the amenities and the pool deck are on the 12th floor. The units below the 12th floor are squeezed in leftover spaces of the project, and are almost all 1-bedroom 2-story lofts. Given their proximity to parking, they have a street-level feel, and according to Andrew Stearns, CEO of StatFunding, “the pricing on the units is all over the place and not representative of the project as a whole.”

Studios were excluded because the 1050/1060 is the only project of the four with studios, and there is no comparable data from the other projects.

Penthouses were excluded for all four projects since are all unique and sales don’t occur with enough frequency. 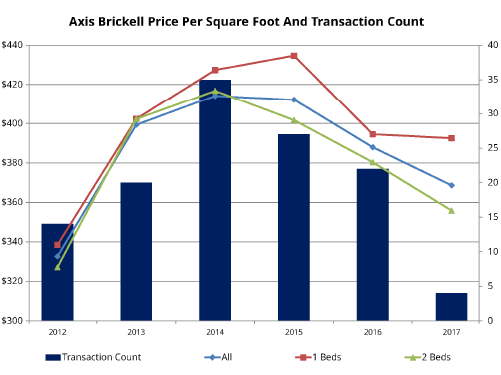 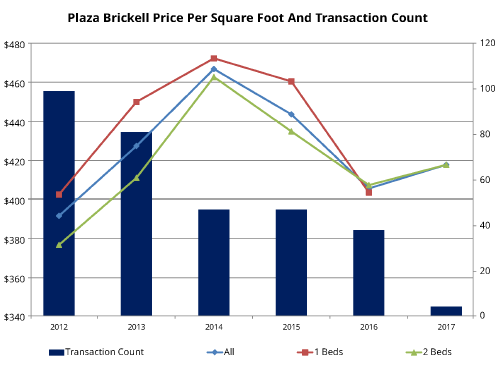 Jade Brickell (2004), waterfront luxury category; 340 units, with 1-bedroom, 2-bedroom, 3-bedroom, 4+ bedroom, “townhouse,” and penthouse units. Completed in the middle of the prior condo bubble, the project “became a hotbed of mortgage fraud and subsequent foreclosure activity.” 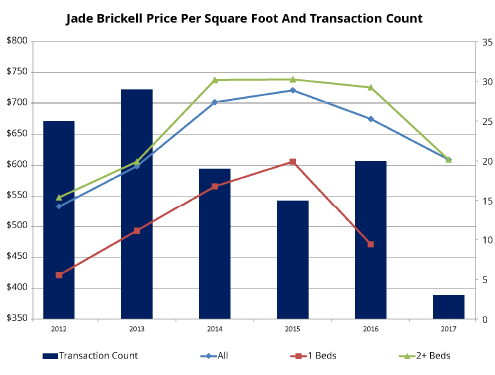 This chart shows the average sales price per square foot for all four projects’ averages combined: 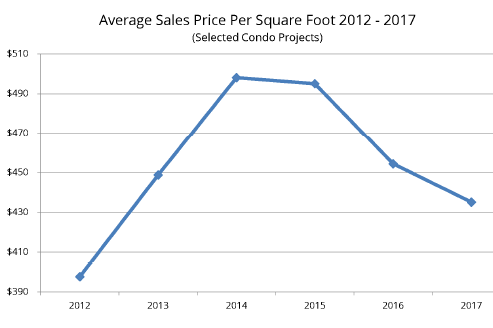 Among the reasons prices have declined:

Why do the numbers not add up? But they do add up

Why do these price declines not show up in the median prices published by the Miami Association of Realtors? Stearns explained:

The realtor’s aggregate data is flawed because from 2009-2016 the data was full of sub $150k sales of bombed-out foreclosure borderline worthless properties – and those properties have worked their way through the system and are the weak comps that make the reported year-over-year average or median gains “true” but entirely meaningless.

So the median price is up 6.3% year-over-year, but it’s meaningless because the prior-year data was pushed down by nearly worthless foreclosed old condos working their way through the process. These units are still not totally gone (Miami Realtors Association lists them as under $50,000 on page 8 of its report).

The consequences when Realtor-published data shows median prices are rising though in reality prices of good condos are declining? Stearns:

What is driving real estate agents crazy is that the local and national real estate associations keep on putting rosy reports out there saying “prices up 7% this month, etc.” but then the agent has to explain to their client that the pricing in their condo building is actually down 20% over the last 18 months with a 5-year supply of units listed for sale.

Most people who make the decision to sell cannot wait five years to find a buyer, which means they have to price the unit at the low end of the market to get their unit sold, which explains a lot about why prices are falling in this market with surging inventory.

The rosy reports might be true in the aggregate, but they mask the distress in certain segments of the market, which makes for painful conversations between real estate agents and their clients.

Miami-Dade’s spectacular condo flipping mania is once again in turmoil. Read… Condo Flippers in Miami-Dade Left Twisting in the Wind