Those who lost out on the Fed’s “wealth effect.”

Here’s a mystery: Has this “wealth-effect” economy that the Fed so beautifully engineered since the Financial Crisis gotten a lot riskier, scarier, and uglier in some profound ways for lower-income Americans, those making $30,000 or less a year?

One of the questions that Gallup posed was this:

Then came 13 issues, including “hunger and homelessness.”

Turns out, among Americans making $30,000 or less a year, 67% worry “a great deal” about hunger and homelessness! Food and shelter, two of the most basic human needs. That’s the highest percentage ever in Gallup’s data series on this question going back to 2001.

Median annual household income in February was $58,714, according to Sentier Research. On an inflation-adjusted basis, this was about flat with February 2016 and below February 2000. Median income means 50% make more and 50% make less. Other studies have shown that incomes have risen sharply at the upper end of the spectrum, but have fallen at the lower end, with the gap widening. Thus the median might have stagnated, but for many of those below the median, things haven’t turned out so well. And there are a lot of them!

With the prices of stocks, homes, art, classic cars, commercial real estate, and the like inflated to dizzying heights after eight years of radical monetary policies, why would these folks, making $30,000 or less – worry more than ever about such basic and dreadful conditions? 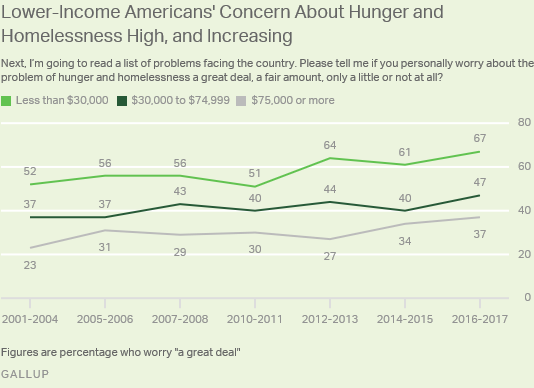 Rising worries about hunger and homelessness can have a number of causes, including media coverage of those topics, or coverage of rising income and wealth inequality in America. In its survey report, Gallup points out that occasionally, when something terrible happens, such as 9/11, it might be “dominating the national consciousness,” and hunger and homelessness recede as primary concerns.

We get that. But Gallup goes on:

Since 2001, worry has been highest among those residing in lower-income households, likely because those with limited financial resources are more at risk of going hungry or becoming homeless. A consistent majority of lower-income adults worried about the problem before 2012, but that has only increased in the past five years.

Lower-income Americans worry about basic problems, in this order:

At the upper section of the spectrum, at incomes over $75,000, things look different, in that order:

Lower-income Americans worry more in general than those with higher incomes. Everything is riskier and tougher for them. But nothing compares to the worries about hunger and homelessness. Gallup:

In the dazzling glitter and excitement of soaring asset prices that central banks around the world, and particularly the Fed, have tried so hard to engineer, it’s easy to forget that not everyone has those assets, that a lot of people can’t get “rich” just sitting on inflated assets, that they have to work long hours in measly jobs just to stay one paycheck ahead of hunger and homelessness.

These Americans are paying the price for the Fed’s efforts to “heal” the housing market. The Fed has implemented elaborate strategies since 2008, among them: cutting its policy rate to near zero, embarking on QE, and bailing out banks and their richest investors, including Warren Buffett and his financial and insurance empire. In 2011, the Fed began encouraging and enabling Wall Street’s biggest private equity firms and other investors to buy up hundreds of thousands of homes out of foreclosure to push up home prices.

This has led to soaring housing costs that have by far outpaced wage growth, if any. And it made it that much harder for these Americans to stay that one paycheck ahead of hunger and homelessness. There are a lot of them. They’re consumers too. And this could be why the economy, which has been ruined for them, has since then not been able to grow at a reasonable pace.

And so, America becomes “Landlord Land.” Read…  So Who’s Pumping Up this “New Normal” Housing Market?

175 comments for “This Economy is Ruined for Many Americans”