The recent prosperity comes with a cost.

By Nick Kamran – Letters from Norway:

From the outside looking in, the Danish economy appears as blissful as the country itself, which usually tops “The Happiness Index.” The unemployment rate ticked down to 4.2% in the most recent release from 4.3% in 2016. Denmark, ranked 20th in economic complexity in 2015, has a mostly even trade balance, and $50K GDP per capita in 2016, making it among one of the richest nations in the world.

Nevertheless, the recent prosperity comes with a cost; one that must be paid by future generations. While the party was fueled by artificially low-interest rates (those below the rate of inflation), a debt bomb has been building, waiting for an inflationary spark to set off a crisis. The Danes out-borrow everyone, including the Americans.

This chart from the OECD (National Accounts at a Glance) shows total household debt as percent of net disposable income in 2015. The top five: Denmark, Netherlands, Norway, Australia, and Switzerland: 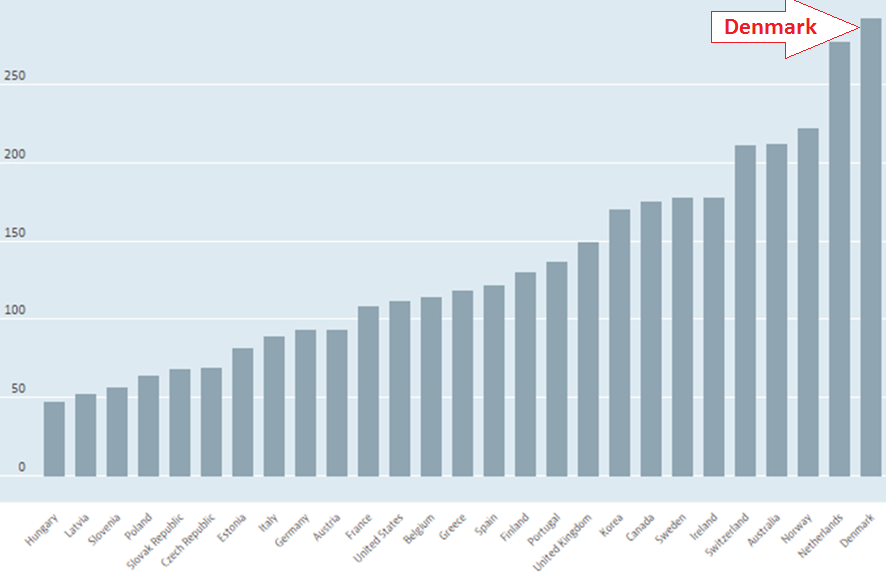 This debt culture, prevalent in the richer nations (because they can), is driven by an artificial sense of confidence that the government will take care of them if the bottom falls out. However, it may turn out that the borrowers will just be refinanced into a longer-term loan, reducing the monthly burden but doing nothing about the debt itself.

Another argument, presented by the Danish Central Bank back in 2014, was that Danish household debt risks are offset by high pension balances and household equity levels. Governor Lars Rohde:

“By far the major part of Danish households’ debt is carried by families who are robust enough to be able to handle shocks to interest rates or incomes. The threat to financial stability from that corner is therefore not serious in the current situation.”

Danske Bank upheld the argument as well in 2014. Many Danes take adjustable rate mortgages, floating on the interbank rates, changing every three to six months. The bank said they can sell off their homes or dip into their pensions to deal with increased mortgage payments and other rising borrowing costs.

However, Danske Bank failed to mention that selling off their homes during a period of “shock” would lead to a crash in home prices and that the lofty asset valuations are based on the low interest rates. So during a home sell-off or if rates went up, the home equity would evaporate and pensions would take a hit. Hence, the powder keg.

Although the Danes have reduced their debt as a percentage of income since 2009, they are still winning the gold medal in credit utilization. Hence, they still remain extremely vulnerable to a rise in interest rates, triggered by an inflation surge after persistently low interest rates.

Denmark’s central bank, like the rest of the Nordics and the ECB, embarked on experimental policy cutting benchmark and deposit rates to zero and below zero. Real interest rates, which account for inflation, are already running negative across the board. Cutting rates initially revived GDP after the 2009 fiscal crisis.

However, the flatlined interest rates barely helped unemployment, and it even reversed between 2015 and 2016. Although GDP and employment picked up since last year, so did inflation.

Hence, the main threat to the prosperity picture. Central Banks, when under pressure, raise rates to rein in prices. That could be tough. It would push up monthly payments of consumer loans. And it would make financing a home much more expensive – and unaffordable for many potential home buyers – at current prices. Prices would tumble. Thus Danes couldn’t sell their homes to get to their equity in order to deal with a shock, as Danske Bank had claimed. This could set off the spiral no one is worrying about.

Denmark is one of the healthier Nordic economies, having avoided the massive housing inflation of Sweden and Norway. However, the Danish Central Bank, working with the government, must do more than cut rates to maintain economic growth. Borrow-and-spend has its limits. The economy charged forward between 2003 and 2006, even when rates trended up. Hence, the focus should be on productivity, policy, and taxation to encourage growth.

If they do that while encouraging people to pay down their debt, they could avoid an inevitable calamity later. The Nordic (Economic) Models, once referred to by the media as the “Next Super Model,” are not predicated on genius but rather borrow-and-spend, burdening future generations. By Nick Kamran, Letters from Norway.

13 comments for “Denmark: Debt Bomb, Waiting for an Inflationary Spark”