Next: higher rates or currency crisis?

By Nick Kamran – Letters from Norway:

Sweden’s welfare state supposedly allows for success while providing a safety net for those unable to keep up with the market. In principle, it is an ideal, utopian-like state. However, Sweden’s touted economic success has come at the expense of its currency, the Krone (SEK), and long-term sustainability. Riksbank, the Swedish Central Bank, like its European contemporaries, has undertaken experimental policy, driving real and nominal interest rates below zero.

Not All Growth is Equal

Since 2014, Swedish deposit rates have been negative. Not only has overall negative real interest rate policy affected housing, but it also drove Swedish consumers deeper into debt. Embarking on the dual mandate policy may have staved off recession, but it created greater problems for the future. 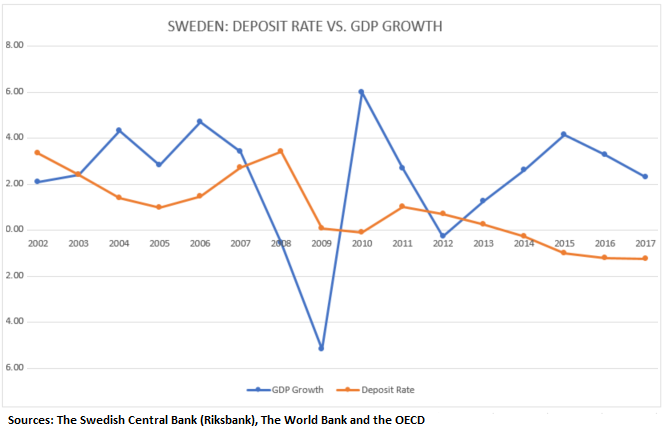 Although current deposit rates are at a record low of -1.25%, the latest GDP print came in at 2.3%, and the growth rate has been tapering since 2015. Sweden’s “hot” GDP growth – hot relative to the region – could be attributed, not to industrial growth, but rather increased government spending, funding social programs.

Additionally, with no incentive to save, consumer debt has taken off, along with the housing prices, while disposable income lagged. Swedish household debt is now at a record high. Hence, the Swedish growth story is not organic but rather a borrow-and-spend one (Source: The IMF Working Paper WP/15/276 by Rima Turk): 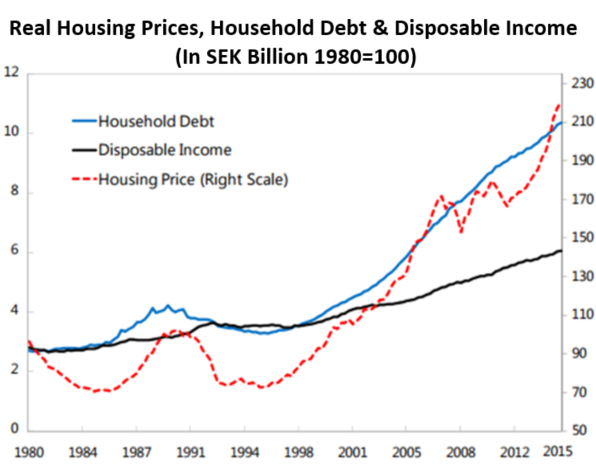 Swedes, like Norwegians, are victims of the “exchange rate versus housing price shell game.” The SEK received today for the sale of their inflated flats has fallen 30% against the US dollar (average USDSEK in 2014 was 6.86 vs. 8.95 on March 15, 2017). Stockholm housing rose 31% during the same period in SEK terms, negating the recent gains over the same period. The SEK fell 23% against gold in the same period.

Hence, the “Swedish Model” is under attack. The egalitarian underpinnings, unwinding with the negative rates, are driving a wedge into Swedish society, creating extremes on both sides of the economic spectrum. The rampant consumerism, encouraged by artificially low rates, continues to widen the wealth gap. Coincidentally, the middle class deteriorated the most between 2014 and 2015: the same time that deposit rates took a dive. Furthermore, the negative savings rates are driving the average person to “gamble” on speculative investments instead of saving and building a future over the long term.

No Pain No Gain

Recently, inflation has been heating up.  Near zero from 2013 to 2015, it edged up to almost 1% in 2016, and printed 1.8% in February.  Much of it is supply driven: rising import prices attributed to a falling SEK.  The real interest rates fell to negative -2.3% (Repo Rate minus Inflation) last month. At some point, Riksbank will either have to raise rates or the government will have to intervene to avert a currency crisis.

Interestingly, Sweden is one of the most economically diverse nations in the world, ranking fourth in economic complexity. Historically, Sweden has been an industrial and innovation powerhouse with firms like ABB, SKF (ball bearings), Astra Zeneca, and H&M. An economy like Sweden’s could more easily adjust to a sustainable interest rate than almost any nation. Although there would be a short-term housing bust, the money would quickly flow into the other and diverse industries, creating new opportunities rather quickly.

Hence, instead of undertaking experimental rate policy, Riksbank and the Swedish government should be engineering a soft-landing or a “controlled crash”, adjusting taxes and policy to ensuring a smooth transition to sustainability for the general population.  There is precedent from Iceland that already exists.

It is clear that the negative rate experiment is neither sustainable nor helpful to economic growth. It only inflates bubbles while widening the wealth gap in Swedish society. A once prudent and financially conservative people are now getting drunk on debt, wrecking their future. The very premise of Swedish society is under attack. Nevertheless, it does not appear that this policy will abate anytime soon. There seems to be one lever in the Central Banker’s control room: interest rates. If anything, they may get more aggressive with it. By Nick Kamran, Letters from Norway.