For the first time in the US since the Financial Crisis.

Let’s forget for a moment the Fed, its rate-increase flip-flopping, and what that might do in theory to the economy, and let’s look instead at what companies are actually doing, how they’re responding to the environment they find themselves in. Because now, something is happening that we haven’t seen since the trough of the Financial Crisis.

Credit growth no matter what has been the mantra. It could never be enough. If companies borrow more from banks, they’ll use that money to invest in productive activities or equipment and grow. That’s the theory. And it would move the economy forward.

So total loans and leases at all commercial banks have soared 40%  since the bottom of the Financial Crisis to $9.13 trillion in the week ending February 15, according to the Board of Governors of the Federal Reserve, and are 25% above the peak of the prior credit bubble in October 2008.

But since the week ending December 7, 2016, they have declined a smidgen. So why is that all-important loan growth flattening out after soaring for so many years? And how do companies fit into this?

Of the many categories of loans and leases, one category stands out as an indicator of what companies are doing: commercial and industrial loans.

They edged down to $2.1 trillion in the week ended February 15. That’s where they’d first stood on October 19. After ballooning relentlessly for six years straight, C&I loans have now been stalled for four months in a row.

Since the bottom of the financial crisis, there have been periods of four or five weeks of stalling C&I loans, but they were invariably followed by robust loan growth immediately afterwards. So these C&I loans have been booming over those years. But this period from October 19 until now is the first extended stretch of stalling C&I loans since the bottom of the Financial Crisis.

The chart shows C&I loans at all US banks going back to 2012. Note how that four-month stagnation-period is unique in this time span: 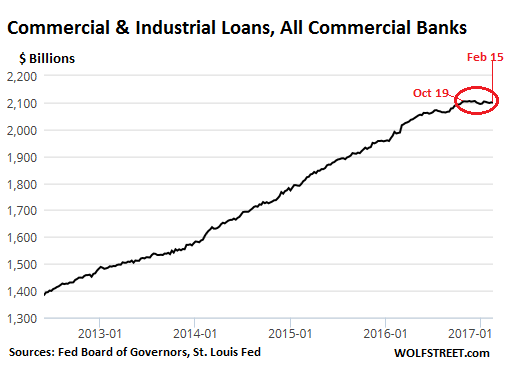 C&I loans are a sign of what businesses of all sizes are doing – from the small company that is borrowing to buy a piece of equipment to the largest behemoth that is funding its inventories. These loans show whether companies in aggregate are expanding their investments or pulling in their horns.

This chart shows C&I loans going back to 1988, covering the last three recessions. The turning points are circled in red: 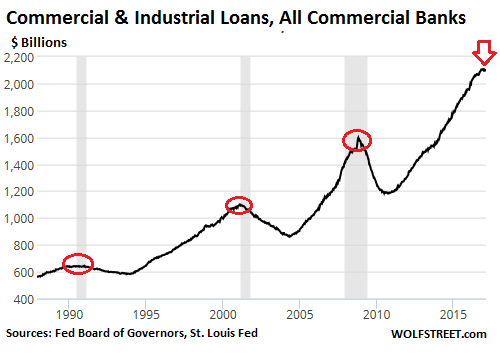 The turning point during the Financial Crisis was unique – a sudden deep collapse in credit, when the banking system began to seize, rather than a classic turning point that evolved over time, as the prior two turning points exemplified.

The timing of a turning point may not be perfectly aligned with the beginning of a recession, but it’s close.

And turning points become clear only after C&I loans are in a real downdraft. Before then, we just have our suspicions. For now, we have four months of stagnation, a first since the trough of the Financial Crisis, and a sign that companies have become more reluctant to borrow from banks. This period coincides with the Fed’s more energetic rhetoric about “removing accommodation.”

Perhaps it will blow over, and companies will head back to their bankers, and C&I loans will surge once again. But more likely, it’s an early warning sign of a gradual change in the dynamics, just when no one wants to see any red flags.

“Flat sales” in the restaurant industry are now a “welcome change.” The New Normal. Read…  Is the US Restaurant Recession Becoming Structural?

32 comments for “Oops, this Isn’t Supposed to Happen in a Rosy Credit Scenario”