China’s debt boom, or “credit boom” in more palatable terms – whose true extent remains purposefully obscure – and what it might do to the Chinese economy and by extension to the global economy is starting to worry some folks at the New York Fed. This is how their article starts out:

Debt in China has increased dramatically in recent years, accounting for roughly one-half of all new credit created globally since 2005. The country’s share of total global credit is nearly 25 percent, up from 5 percent ten years ago. By some measures (as documented below), China’s credit boom has reached the point where countries typically encounter financial stress, which could spill over to international markets given the size of the Chinese economy.

The data points can give you the willies:

The international experience suggests that such a rapid buildup is often followed by stress in domestic banking systems. Roughly one-third of boom cases end up in financial crises and another third precede extended periods of below-trend economic growth.

Lending by banks is still the largest component of the credit boom, but as authorities are trying to keep it from spiraling out of control, “shadow” lending by nonbanks (trust loans, entrusted lending, and undiscounted bankers’ acceptances) has surged:

Nonbanks, often in cooperation with banks, have found ways around authorities’ efforts to restrict lending to certain sectors (such as real estate and industries with excess capacity like steel and cement) following the initial surge in credit in 2009.

This shadow credit accounts for about 15% of total credit, or 31% of GDP, up from 5% ten years ago. Authorities have been trying to contain this shadow credit boom since 2013 via macroprudential measures. But where there’s a will, there’s a way: these efforts likely “caused credit to migrate to other lending channels.”

Meanwhile, in line with the house price bubble, mortgage lending became the latest driver in the debt boom: At the end of December 2016, residential mortgage loans were up 35% year-over-year.

But debt may be ballooning even faster.

The increasing complexity of China’s financial system has made it difficult to estimate the true level and growth rate of credit. Official data put nonfinancial debt at roughly 205 percent of GDP. However, adjustments for additional sources of credit not fully captured in the official data suggest total credit could be higher.

One way that the growth in debt could be underestimated:

The annual growth in the People’s Bank of China’s measure of “total social financing” – which includes bank loans, off-balance-sheet financing, trust loans, and net corporate debt issuance – is now around 12% (about half of what it had been during the blistering surge after the Financial Crisis). That’s the official figure.

But with the muni bonds swapped for bank loans added into the equation, annual credit growth would be above 15%.

The smaller banks are doing it.

Chinese authorities have had some impact trying to control credit growth at the big four state-owned banks, ranked among the five largest banks globally by assets. But the smaller banks “have been growing their total assets at two to three times the pace of the largest commercial banks.” And they have some special products. The report:

WMPs are predominantly short-term investment products sold by banks and nonbank financial institutions that provide investors with higher rates of return than bank deposit rates. WMPs can have a range of underlying assets, including bonds, money market funds, and even a limited amount of bank loans.

Official data on banks’ WMPs show an almost sixfold increase since 2011, to the equivalent of about $4 trillion or 37 percent of GDP.

The growing reliance of Chinese banks on this type of funding has increased concerns over potential shocks to market-based funding, a risk highlighted by the International Monetary Fund in its October 2016 Global Financial Stability Report.

But “less bang for the debt,” so to speak.

As debt ballooned, its effectiveness in stimulating economic output has declined. The “credit pulse” – the change in the flow of new credit as a percentage of GDP – “appears to be providing less bang to output for each additional yuan of credit, underscoring questions over how much lending is going to unproductive ‘zombie’ companies”: 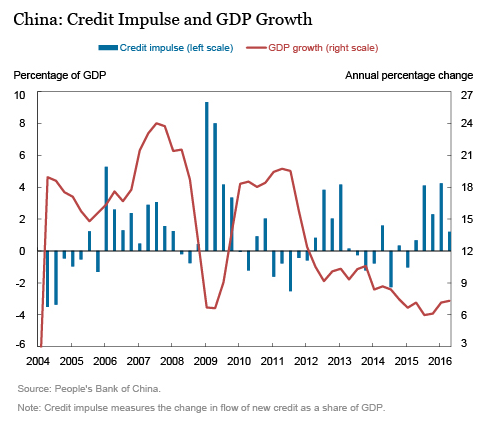 But authorities might keep the plates spinning for a while longer, and waiting for that financial crisis in China, and what it might do to the global economy, might require some patience. According to the report, China’s financial system sports some features that for the moment lower the risks of “a financial disruption,” among them:

So the government has some capacity “to absorb potential losses from a financial disruption.” But worries persist.

Still, the speed and increasing complexity of the country’s credit growth suggest that there could be significant benefits for China in addressing its banking system and financial reforms.

And do so presumably before contagion spreads to the rest of the world.

It started with a whimper and has turned into a roar: China and other foreign governments are dumping US Treasuries. Read…  Foreign Governments Dump US Treasuries as Never Before, But Who the Heck is Buying Them?

25 comments for “Debt Boom in China Could Lead to “Financial Crisis,” But Maybe Not Yet: New York Fed”