Investors have gotten so used to central bank “laxity” they “cannot believe it will end.”

Financial markets are essentially burying their heads in the sand about rising interest rates in the US and the end of QE in the Eurozone, according to Patrick Artus, Chief Economist and member of the Executive Committee of Natixis, an investment bank and asset managers with about $900 billion in assets under management.

Investors have been spoiled by central banks and their highly expansionary monetary policies “for such a long time” that they “cannot believe” that the Fed and the ECB “can end these policies,” he writes.

In the US, investors see a “muted” Fed reaction to the return of wage inflation and consumer price inflation. They expect only three fed fund hikes in two years, rather than the three in 2017 alone that the Fed has suggested, followed by a similar number in 2018 and additional hikes in 2019.

In addition, backed by higher energy prices, consumer price inflation “will be quite high and core inflation will exceed the Federal Reserve’s target in 2017,” according to the report.

And we’re nearly there.

Of the various inflation measures we have available, the Personal Consumption Expenditures  (PCE) inflation index for December, released on Monday, pegged core inflation (without food and energy) at 1.7% over the 12-month period (blue line), just below the Fed’s 2% medium-term target. The all-items PCE inflation index (red dots) has jumped in 2016 and now stands at 1.6% (chart by Doug Short, Advisor Perspectives): 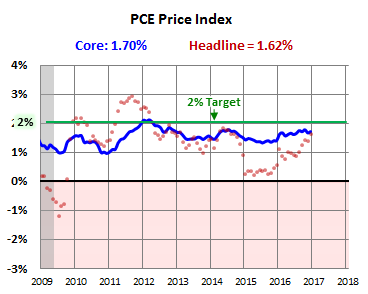 Both the core and the headline Consumer Price Index (CPI) for December already pierced the 2% mark, with core CPI at 2.2% (blue line), and headline CPI (red dots) at 2.1% (chart by Doug Short, Advisor Perspectives). Note how the red dots have surged in 2016: 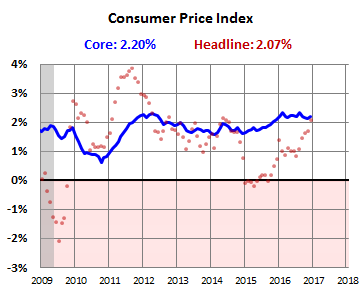 In the Eurozone, a similar scenario is playing out. Even if there is little or no wage inflation in the Eurozone, the rising price of oil “is likely to drive up inflation to a level not far from the ECB’s target in 2017 and 2018,” according to the report. Note how the overall Eurozone inflation has shot up in recent months (via Trading Economics): 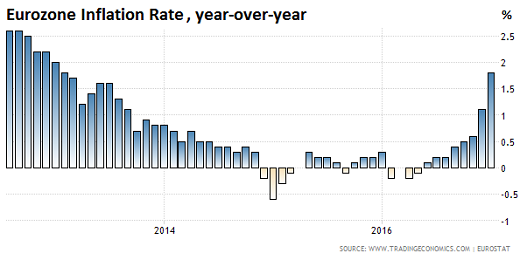 The ECB will eventually react, just like the Fed is already reacting. The question is when and how. Artus considers it “very likely” that the ECB will announce in 2017 that it will end QE “in the first half of 2018.” Yet, he says, investors “do not believe in an exit.”

With both the Fed and the ECB, “investors have so been used to central bank ‘laxity’ that they cannot believe it will come to an end,” he says. And so they’re willfully underestimating the impact of wage inflation and consumer price inflation on central bank decision making.

But once investors are confronted with the reality that the Fed will become “markedly less accommodating” and that the ECB’s QE will end in 2018, “the reaction of financial markets – and especially bond markets – may be strong.”

And for the struggling countries of the Eurozone periphery – Italy, Spain, and Portugal (with Greek debt already being on bailout life support) – the “danger” is “the level to which this correction in long-term interest rates could push up peripheral interest rates.”

Hence his tersely worded conclusion for that special moment when markets come to grips with the reality that the greatest credit bubble in history is about to end: “Watch out for the shock.”

Average hourly earnings in the US are now 2.9% higher than a year ago and 5.7% higher than two years ago. Workers love wage inflation. And it props up consumer spending. But for the Fed, it’s a nightmare. Read… The Thing in the Jobs Report that Gives the Fed the Willies

40 comments for ““Watch Out for the Shock”: Asset Manager Natixis”