When Hanjin Shipping Co. declared bankruptcy on August 31, 2016, the world’s seventh largest container carrier, and the largest ever to go bankrupt, threw the shipping industry into chaos. Fully loaded ships were stranded at sea and in legal limbo. Supply chains were disrupted. Hanjin had been considered too-big-too-fail for South Korea, and the industry had relied on a bailout, but it was allowed to fail.

Now that Hanjin is being liquidated and that the logistical nightmares have cleared up, what happened to Hanjin’s 98 containerships – and their “opaque” ownership?

And what happened to container freight rates? They’d plunged to historic lows in the spring of 2016, among rumors that they’d collapse to “zero,” and had pushed already listing Hanjin to keel over entirely.

Since then, idle capacity has been dropping, “in large part due to some of those ex-Hanjin ships being re-chartered,” according to Drewry: 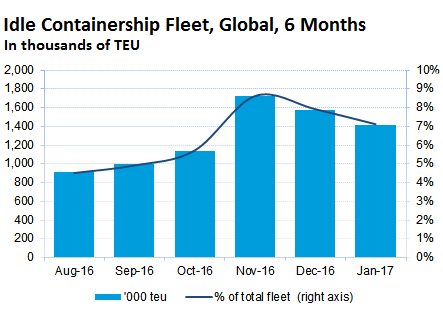 So this is what happened to Hanjin’s 98 ships:

Of those 31 Hanjin ships that have found new operators, only one had been owned by Hanjin.

The other 30 are owned by non-operating charterers such as Danaos, Kmarin, and Seaspan, and they’ve found replacement lessors, “presumably at considerably lower daily charter rates than Hanjin was paying.” Maersk Line, the largest carrier in the world, has leased 11 of those 30 ships (combined 77,000 TEU).

These are the carriers that now operate 31 of the Hanjin ships, in thousands of TEU: 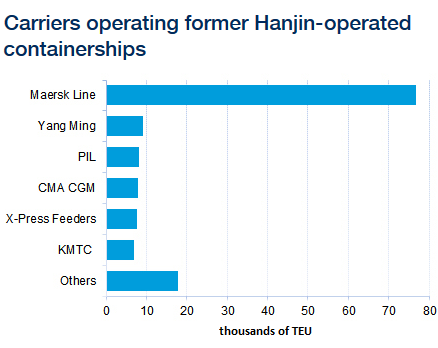 In December, the first 16 Hanjin ships were sold at auction for a total of $457 million (list). Drewry adds, “Prices are unconfirmed and based on a variety of sources”:

Drewry estimates that, “accounting for the less than transparent ownership details,” as much as 150,000 TEU of Hanjin-owned ships remain for sale. “With such a glut of containerships already available and limited demand growth, it is debatable just how big a market they can attract even at knock-down prices.”

And this is what happened to container freight rates:

The volatile Shanghai Containerized Freight Index (SCFI), which tracks only spot-market rates (not contractual rates) of shipping containers from Shanghai to 15 destinations around the world, began surging off its historic low in March 2016. In the latest reporting week, it eased off 17 points to 954, after having hit a two-year high earlier in January:

Freight rates had started plunging in early 2015. By early 2016, carriers, desperate to get loads together, were accepting rates far below cost. Last March, there were rumors that some carriers quoted rates of “zero” in the spot market, which marked the low point, when the SCFI, hit 415, down 62% from February 2015! It has now recovered much of that lost ground.

The broader and less volatile China Containerized Freight Index (CCFI), which tracks contractual and spot-market rates for shipping containers from all major ports in China to 14 regions around the world, rose 1.3% in the latest reporting week, to 876, the highest level since April 2015:

The CCFI had plunged 41% from February 2015 to a record low of 636 in April 2016. So it too has recovered much lost ground. And carriers a breathing a collective sigh of relief. It still speaks of depressed freight rates: at inception in 1998, the index was set at 1,000 and has ranged above it for much of the time.

But carriers have been forming ever larger alliances with each other to lower competition on the major routes, allow for more collusion, and push up freight rates. And that, more than the Hanjin bankruptcy, has lit a fire under freight rates.

36 comments for “What the Heck Happened to Hanjin’s Ships and the Collapsed Freight Rates?”