The lure: Buy a preconstruction condo from a developer in the early stages of development. The initial deposit is small, and in a booming market, the payoff big. Additional payments need to be made as the building progresses, but lenders are eager to lend as condo prices soar. Everyone is in nirvana. This bet has been hot in the condo construction boom around the country. But in Miami, the bet is now collapsing. And preconstruction condo flippers, the lucky ones that could sell their units at all, are bathing in a sea of red ink.

First things first: The overall condo market in Miami-Dade has gotten tough, with the inventory of condos for sale ballooning and with sales plunging.

Inventory of condos listed for sale on the Multiple Listing Service (MLS) jumped 16% from December a year ago, to 14,436. At the current sales rate, 12.7 months’ supply. But as we’ll see in a moment, developers don’t list all their unsold units on the MLS in order to avoid the appearance of a condo glut, and these inventory numbers are understated.

This chart by StatFunding shows the decline in sales and the surge in condos listed for sale. Note the seasonal drop in inventories from November to December. I added the red marks to show just how much the inventory glut has ballooned over the past two years: 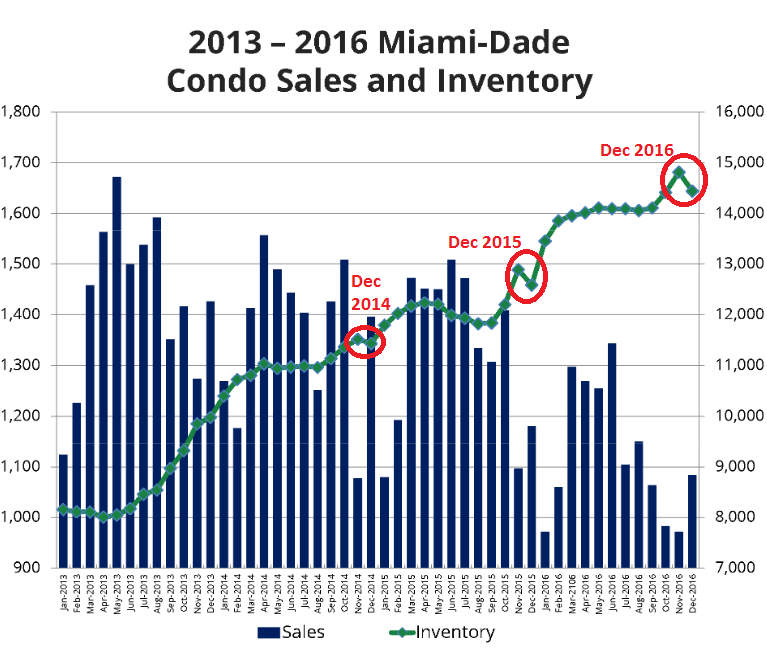 This is not a great market for preconstruction condo flippers and for developers that have recently completed or are now completing condo towers that began sprouting like mushrooms a few years ago.

Andrew Stearns, CEO of StatFunding, tracks the Miami-Dade market for preconstruction condos along with the money that is being made, or lost, in those transactions; and he tracks the condo units that developers have been unable to sell. He notes in his January report:

From 2012 to mid-2015, Miami developers sold all units in each project within months of completion of the project. The inflection points of previous condo cycles have been marked by developers getting stuck with unsold developer units.

The newest addition, the CityCentre Rise, was completed in September 2016. Its 390 units should have sold during the development process, but didn’t. Now the developer is sitting on 217 unsold units, or 56% of the total. And only 20 of those units are listed for sale on the MLS.

This shows how the MLS inventory-for-sale numbers understate the total count by understating the new units that are completed and that developers are sitting on but are not listing on the MLS. Developers don’t want to pull the covers off the enormous condo glut.

This condo glut is starting to leave skid marks.

The developer of the 190-unit EchoAventure, completed in August 2015, has taken out a bridge loan secured by the 15 unsold units, a sign that even the developer is not expecting to sell them anytime soon, after having failed to sell them over the past year-and-a-half. According to the report, other developers haven’t repaid their construction loans.

But it’s costly to carry unsold units as the developer has to pay taxes, maintenance fees, and insurance.

In this environment, condo flippers – in direct competition with developers – are taking some heavy losses, the lucky ones that could sell their units at all. Here are some of the units they were able to unload from November 2016 through January 2017, with losses indicated after 6% sales commissions. The most expensive condo in the batch generated a loss of 28% (click to enlarge): 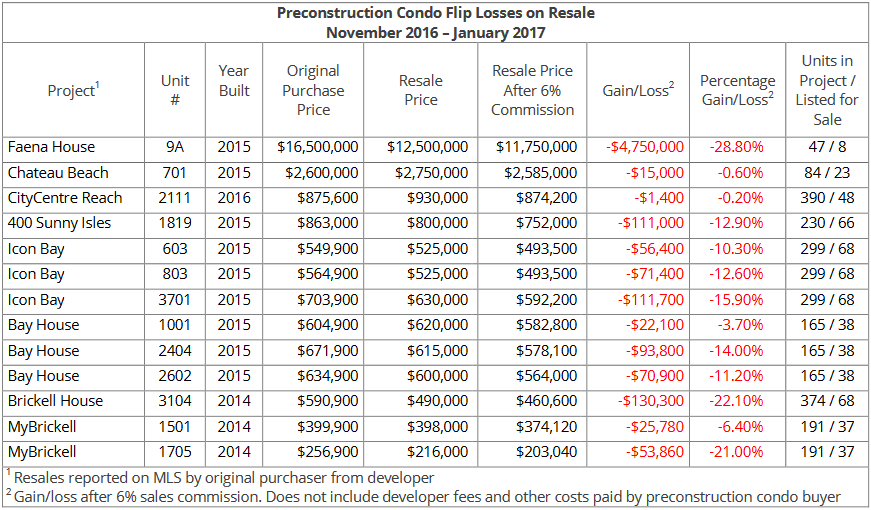 Condo flippers are increasingly willing to take a loss to unload the unit. So the number of preconstruction condos listed for sale at a loss continues to climb. And “because there are so many listings-for-losses in the market,” according to Stearns, “comparable sales prices are trending down….”

The pain is likely to get worse. In addition to the units that developers are sitting on, and those that preconstruction flippers have bought and are trying to unload, there are more than 10,000 additional condos that will be completed in 2017 and 2018!

“Unless something extremely positive and unexpected occurs which completely changes market conditions,”Stearns writes, “Miami condo flippers should expect losses on resale to continue.”

And this is how a condo construction boom turns into a condo glut that unravels the overall condo market – unless of course said miracle happens, and it would have to happen by about right now.

There has been a generational shift in the US housing market after the Financial Crisis. It has turned Wall Street into the largest landlord. And Wall Street gets its way, as the government buckles and guarantees buy-to-rent Mortgage-Backed Securities for the first time ever. Read… Financialization of Rents Gets Taxpayer Guarantees